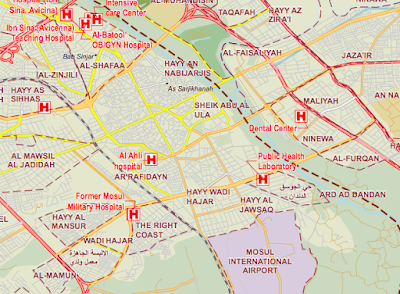 A force of at least 100 Islamic State fighters moved from the Old City district (Sheik Abu Al Ula on map) down the Tigris River and attacked Danadan and Dawasa neighborhoods (bottom right of map) forcing police to temporarily retreat to the Mosul International Airport (bottom of map). Zinjali (top left corner) was finally freed by Iraqi forces on June 13. Iraqis are now trying to free Shifa (Shafaa on map) and its host of hospitals before attacking the Old City the last major section of Mosul under IS control. (Medecins Sans Frontieres)

The Islamic State launched a surprise attack upon the Iraqi forces in two neighborhoods in southern west Mosul. Starting at 3 am around 100 Islamic State fighters attacked the Danadan neighborhood coming out of the Old City district. The fighters moved along the Tigris River and opened with 7 car bombs from the front and 25 suicide bombers that hit the Federal Police from the rear. One police commander told the press there might have been up to 50 suicide bombers, but that figure might have just come from the heat of the battle with so many explosions going off. The Federal Police claimed that IS sleeper cells were responsible for the attacks from behind. The insurgents set fire to buildings to create smoke to try to prevent air strikes, took over a mosque to announce their presence, and executed 6 people. They were able to expand the attack into Dawasa and Nabi Sheet as well. The police were temporarily forced back to the Mosul airport outside of the city. By the afternoon, the Iraqi forces (ISF) and a spokesman for the U.S. led Coalition claimed that all the lost territory was re-captured. That was contradicted by a man who talked with the Washington Post who said there were still IS fighters on his block, and a Federal Police officer who told Reuters clashes continued. Throughout the Mosul battle the insurgents have been able to occasionally launch these large attacks and throw the ISF back on their heels.


Whenever bad news occurs on the battlefield the Iraqis unfortunately try to obfuscate and cover things up. That started with the Federal Police Commander Raed Shakir Jawadat who stated that this was actually a tactical operation carried out by his forces to draw insurgents out of the Old City so that they could be destroyed. If that was true then it backfired as his police got surprised by suicide bombers appearing in their rear. A colonel from the Rapid Reaction Division gave a different version of the attack claiming that the militants were attempting to escape their encirclement. Finally, the ISF said that the Islamic State lost some of its best foreign fighters during the day. This happens all the time. The Iraqi government’s policy is to only talk about the victories in the war against the militants. When setbacks like this happen, the ISF will deny, distort, and embellish what happens, which is what happened here.

There was fighting in other parts of Mosul as well. According to Ninewa Operations Command head General Najm al-Jabouri IS also attacked Bab al-Sinjar and Zinjali, which it just lost to the Iraqi forces, and Shifa, which is still contested. These actions and the push into Danadan showed that while the Islamic State are down to their last straw in the overall battle they are still able to launch these successful tactical operations.

The number of displaced (IDPs) has remained at a low level for the last several days, while most people are now coming out of west Ninewa. From June 11-13, an average of 2,000-4,000 IDPs has fled west Mosul per day. That’s been steady since the start of June. The ISF are now moving people from west Mosul directly to the east via a pontoon bridge over the Tigris River rather than telling them to head south to Hamam al-Alil. In comparison, 14,000 people came out of Baaj along the Syrian border since June 5, and several thousand more before that. Before the final phase of the Mosul battle there was a huge outflow of almost 10,000 people per day, but since the fighting started that has fallen off. On the other hand, the Hashd are reportedly emptying out all the villages they take in the west, which is why so many IDPs are coming from there now. It appears the Hashd may want to create a security zone in west Ninewa, which has happened in other sections of the city such as Jurf al-Sakhr in Babil and Baiji in Salahddin, and sections of Diyala, and may not allow civilians to return.

Adhamiyah News, “Military Information Cell: A number of Daash operatives managed to infiltrate into the Danadan area in Mosul,” 6/14/17

Bas News, “Dozens of IS Militants Return to Two Liberated Areas in Mosul,” 6/14/17
- “Tens of Daash have infiltrated into liberated Danadan and Nabi Sheet West Mosul,” 6/14/17

Al-Ghad Press, “The Rapid Reaction Division kills several Daash in on going clashes in the Danadan district in Mosul,” 6/14/17

New Sabah, “Counterterrorism Forces continues its advance in the Shifa district after controlling most of its main buildings,” 6/14/17

Shafaaq News, “Dash lost its finest fighters in the attack on Danadan,” 6/14/17
- “The federal police repulsed a fierce attack for five hours in Mosul,” 6/14/17
- “A tactical operation by the Iraqi forces to draw tens of Daash into the Danadan from the Nuri Mosque,” 6/14/17