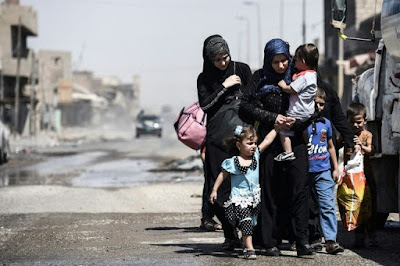 June 24 was another slow day of advances for the Iraqi Security Forces (ISF) in west Mosul. The Federal Police said it freed Bab al-Baid, one of the entrances to the Old City district. Other Federal Police units were pushing into the center of the district towards Farouq Street and the Omar al-Aswad Mosque. The Golden Division were also on the outskirts of the Nouri Mosque, which the Islamic State recently destroyed. A general from the division claimed that 50% of the Old City was now under government control and would be liberated in 10 days. To the north of the Old City the Rapid Reaction Division was still fighting to take the Republican Hospital and sections of the medical complex in the Shifa neighborhood. The ISF and Iraqi government are being overly optimistic as usual predicting that Mosul would be freed in days and overstating how much was taken from the insurgents. The government’s own maps of the Old City for example do not show half of it freed. There are likely a few more weeks of hard combat left before liberation can be proclaimed.


Another suicide bomber went off amongst people fleeing the militants. A bomber hid amongst a group of displaced (IDPs) coming out of the Old City and killed one and wounded three. That came a day after five more bombers hit both east and west Mosul. For days now there have been warnings that IS members have been hiding amongst IDPs, and now those have come to fruition with these set of explosions. That can only sow more distrust within the city and IDP communities and camps. They will also add to the growing tensions and calls for IS families to be exiled. Already 20 families were removed by the security forces from Hamam al-Alil on June 23 after a series of attacks occurred.

Agence France Presse talked with people coming out of the Old City. It found many of them emaciated having not eaten for weeks. Others were in shock. West Mosul has been facing huge shortages of food, water and other basic for months now, and the intensive fighting, shelling and air strikes have left most of that half of the city devastated. The effects of all that were shown in the residents’ faces.

Al Ebaa TV, “The anti-terrorism forces arrive at the outskirts of Al-Nouri Mosque in Mosul,” 6/24/17

Al Ghad Press, “The federal police are approaching within 150 meters of Al Farouq Street and Omar Al-Aswad Mosque in the Old City,” 6/24/17

Al Maalomah, "A civilian was killed and three wounded in a suicide bombing in the old city of Mosul," 6/24/17

UN Office for the Coordination of Humanitarian Affairs, “Hundreds of civilians are being killed and injured as fighting intensifies in Mosul’s old city,” 6/24/17