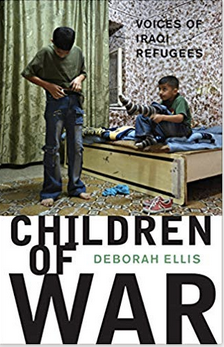 By 2007 there were over 2 million Iraqi refugees fleeing the violence that exploded in their country after the U.S. invasion. In 2008 Deborah Ellis went to Jordan to interview Iraqi children about their situation. She was hoping their stories would be read by Americans and help end the war. That led to Children of War, Voices of Iraqi Refugees that included over 20 young Iraqis explaining their experiences. The majority were Sunnis and blamed the U.S. for their situation, which must have satisfied Ellis’ anti-war agenda. What was more important however was what the kids had in common. That was a sense of loss living in a foreign country in often poor conditions, and a general feeling of malaise as they believed they were stuck in their situation with no real hope of changing it.


Most of the children included in the book left Iraq before the 2006 civil war for a variety of reasons. For example, Hibba’s father was threatened by men in masks leading them to leave for Jordan. Michael was a Christian who moved from Baghdad to Mosul to escape the invasion, but then left Iraq due to the bombings and shootings that were taking place in 2004. Sarah’s mother worked for the government before the invasion and was a Baathist. After the war she received death threats, so she got her family and left. Eva was a Mandean from Basra. Her father was a goldsmith who was robbed and killed in Baghdad. Her family then started being threatened due to her religion, so they went to Jordan. Bashar’s grandfather was kidnapped and killed in 2003 so her whole extended family went to Jordan. Wildian had her father tortured to death, her mother was kidnapped and found dead, and then her uncle was beaten leading them to depart the country. Shahid’s father was an interpreter for the Americans, but that job led to threats forcing them out. All of their families suffered from the lawlessness that spread throughout the country after the overthrow of Saddam. It wasn’t just insurgents and militiamen that were responsible, but criminals looking to extort money from people via kidnappings, and common Iraqis that turned on their fellow citizens as the nation became more and more divided.

Moving to Jordan presented a whole new set of problems for the families. More than half the kids believed that the Jordanians did not like Iraqis. That came from kids not wanting to play with them to one child who said his teachers were mean to the refugee students. Almost all of them ran into financial problems because they could not legally work in Jordan. Their housing was generally in poor condition. There was also a general sense of loss. Shahid wrote letters to his friends back in Iraq but because there was no mail service, he just put them in a bag. Michael and Masim’s mothers became depressed in exile. All of them wanted to leave Jordan. Many of them applied for immigration to the United States or Canada. A few actually were able to go to the latter. Many didn’t believe they would be accepted. Having lost their country they were generally despondent. They didn’t like being in Jordan, but didn’t think they could get out.

Children Of War provides an interesting perspective on the Iraq conflict as it focused upon kids. Youths usually say what is on their mind in an unfiltered way. The biggest impression on them was the violence that forced their families to leave. They faced kidnappings, murders, and bombings, and lost relatives. Most of this happened even before the civil war really took off in 2006. The other major issue was the struggle to start anew in Jordan. They were hoping to find a new home, but things didn’t turn out the way they hoped for. The lack of friends, family and jobs all took its toll. Although it is not included in the book, many people never went back to Iraq. That was partly because they eventually found a new life and also because they didn’t feel like they would be safe if they returned. There are not many books on Iraq’s refugee crisis. This might be a good place to start to get the human perspective on the topic.