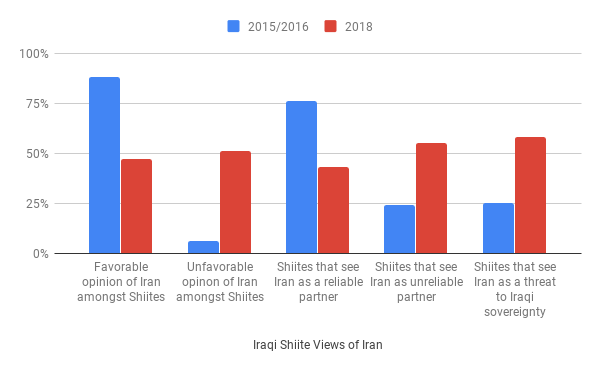 The Washington Post recently published an article by Munqith al-Dagher the CEO of Almustakilla for Research in Baghdad on a public opinion survey his firm conducted on Shiite views of Iran. The poll found a large change in people’s views of Tehran and its role in Iraq. Dagher’s analysis of the poll however missed many important points about how Iraqi politics work and even undermines some of his own points at the end.

Dagher’s opinion of those figures was that Iraqis have now come to blame Iran for many problems. For one, there is a great disillusionment with Baghdad as shown by the summer protests. Iran has supported all of the Iraqi governments since sovereignty was returned in 2006 so Dagher felt they are guilty by association. Second, Iran is a major trade partner with Iraq. It has provided millions in cheap consumer goods to its neighbor which have undermined domestic industries in Iraq. Third, Tehran cut the flow of water going to Iraq during the summer, which contributed to the demonstrations. In the end, Dagher hedged his bets by saying that the shifting mood amongst the public might open room for nonsectarian politicians to rise in Baghdad, while at the same time he didn’t think that Iranian influence would lesson as it has many allies.

There are several problems with Dagher’s analysis. First, his company provided no data for pre-2015 public opinion on Iran. One reason it probably had such a high rating initially was that Tehran was an important ally in the war against the Islamic State and mounted a large public relations campaign using social media and its allies to promote its role. Now people’s views may be reverting back to pre-war levels, but that’s impossible to tell since Almustakilla’s data in the article starts at 2015. At the same time, there was definitely a lot of public resentment at Iran’s influence shown during the summer protests in Basra as people called out Tehran and burned its consulate. Second, Iran has reduced river flow to Iraq over the years, but the country that got blamed for the water crisis this summer was Turkey which built a new dam on the Tigris. Third Dagher seems to believe that Iraqi politics is responsive to public opinion. The annual summer protests and low voter turnout in this year’s parliamentary elections show that is not true. The demonstrations have not been able to achieve any of their goals regarding services, corruption, jobs or better governance. This year’s balloting saw a very low turnout as people were obviously tired of the status quo in Iraqi politics. As Prime Minister Mahdi has tried to put together his new government however things have been business as usual as various blocs argue over positions to enrich themselves and maintain their patronage networks. Finally, as Dagher himself admits at the end, Iran’s power in Iraq has nothing to do with public support but rather its influence within the Iraqi state. Its friends remain in power in Baghdad and it has successfully supported the growth of its allies within the Hashd al-Shaabi who ran in the elections and are now their own separate security force. This role will not change with a shift in the public. Overall, because Dagher’s data comes from a limited period it can only tell so much, and his own commentary undercuts some of his views.

Considering the American establishment's strong, almost fanatical, animosity toward Iran I would not take anything the Washington Post has to say about that country at face value. This doesn't necessarily mean the poll is wrong or inaccurate, but without knowing the methodology the polling company used to obtain its results, and keeping in mind the Post's longstanding role as a conduit for state department propaganda (e.g. leading up to the 2003 invasion of Iraq), a healthy skepticism is surely warranted.