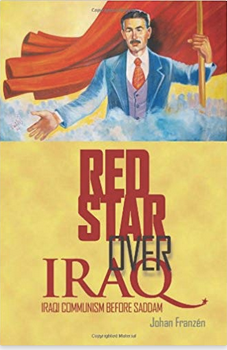 The Iraqi Communist Party (ICP) returned to the news when in May 2018 it helped Moqtada al-Sadr’s Sairoon list win the most seats in Iraq’s parliamentary elections. Before that the group had been organizing demonstrations over the lack of services, corruption, and poor governance. This harkened back to the party’s long history of opposition politics during the monarchy when it led two large protest movements. Johan Franzen in Red Star Over Iraq, Iraqi Communism Before Saddam is a history of the party from its start in the 1930s when Iraqi politics were shifting from individual based parties to ones focused around ideology, through its opposition to English imperialism, and then its sudden decision to back a series of governments brought about by coups starting with the Qasim government through the Arif brothers and up to the Baathists. Franzen’s thesis is that the ICP’s adherence to Communist ideology, and especially pronouncements by the Soviets, led to its own undoing as it aligned itself with Iraqi regimes that were intent on co-opting it and then destroying its cadres.


The Communist Party (ICP) developed during a period of widespread change in Iraq. During the early days of the country in the 1920s-30s the first political parties were simply vehicles for individuals to gain office. After World War II the nation went through several large transformations starting with the migration of peasants from the countryside to the cities looking for new opportunities, secular education expanding, the creation of a new class of intellectuals who were open to new and radical ideas, and the first parties based upon ideas rather than personalities. Communism was one of these new concepts first introduced to Iraq in 1927. In 1934 the Iraqi Communist Party was formed. Its contemporaries were parties like the Naserites and Baathists that espoused pan-Arabism and Arab nationalism, and would prove to be the main rivals for adherents and power in Iraq.

Many Iraqis were initially drawn to the party for its opposition to England, which had created Iraq and continued to dominate the country afterward leading to widespread resentment. The party would dramatically come into public view in 1949 with the Leap which was widespread protests against revising the Anglo-Iraq Treaty that set relations between the two nations and the 1952 Intifada that started with a  strike that quickly turned into national demonstrations. This would also start the first of many government crackdowns on the party that would see its leaders arrested, some executed, and others having to flee. At the same time, this period represented the quick growth of the Communists. Due to its organizational prowess and message the ICP became Iraq’s first mass based party drawing from different classes, sects and ethnic groups.

The party’s problems began when its ideology led it to align with the Qasim government that took power in a 1958 coup. The day of the coup the ICP called out its followers in Baghdad to carry out demonstrations in support of the military overthrowing the monarchy, which was considered a legacy of British rule. Qasim came to initially rely upon the ICP for support. For example, he used the Communists to go after his opponents in the military and help put down a revolt in Mosul in 1959 led by disgruntled officers. At the same time, Qasim refused to share power or even legalize the ICP as a political party. By the end of his rule, Qasim began going after the ICP and arresting its members. Still, the Communists remained loyal until the very end when they finally began criticizing Qasim, but then it was too late as he was deposed by the army and Baath Party in 1963.

The ICP’s determination to stick with Qasim through thick and thin was due to the ideology emerging from Moscow. At the time, the Communists believed countries had to pass through specific phases of development before socialism could be achieved. That included petite bourgeoisie nationalist parties forming that would help expel imperialism. The ICP believed that Qasim epitomized that stage in Iraq. He not only got rid of the last vestige of the British, the monarchy, but withdrew from anti-communist programs propagated by London and Washington such as the Baghdad Pact and Eisenhower Doctrine, reached out to the Soviet Union for arms and support, and implemented an agrarian reform program. The Iraqi Communists became so committed to this man that they put up with his snubbing of their aspirations to join the government, and stood by him even when their members were being thrown in prison. This would be repeated with the next two governments.

Franzen does a great job of describing how the Communists never learned their lesson from the Qasim experience and stood by their ideology to their great detriment. Colonel Arif replaced Qasim as the new ruler of Iraq in 1963. His allies the Baathists hunted down ICP members and killed and imprisoned hundreds of them. That forced much of the leadership to leave Iraq or flee to Kurdistan where it had an alliance with the Kurdistan Democratic Party (KDP). The ICP even attempted a military revolt in the first year of the new regime, but it was put down. After Arif expelled the Baathists and began nationalizing the country’s industry, the ICP made an about face and began courting the government, again claiming that it was an anti-capitalist regime, which was necessary before socialism. This happened despite thousands of cadre still being in prison. This move caused a deep riff within the party, and led one faction to advocate for a coup and another a popular revolt. Neither happened as the Baathists beat them to the punch and came to power in another coup in 1968. Again, the ICP’s ideology undermined it. Rather than pushing for it to take the lead in revolutionary change in Iraq, it once again aligned with a military ruler because of its view of history and how Communism was to come about. Arif never even made the positive overtures as Qasim initially did to the party, yet the Communists were willing to back the colonel.

The ultimate demise of the ICP came when it did the same thing for the third time with the Baathists. The Baath were no friends of the Communists and persecuted them once more when they returned to power in 1968. Then again, just like with Arif, when the Baath nationalized the oil industry, struck a friendship treaty with Moscow, started using the same language as the ICP about imperialism, the Communists labeled the Baath the new nationalist bourgeoise party that would lead Iraq forward. By this time the idea of scientific socialism had been introduced, which believed that non-Communist groups like the Baath could move countries towards socialism. President Bakr eventually opened talks with the ICP but always let it be known that it would be on his terms. That led to a national front with the Baath and the Communists getting two ministries in the government from 1972-73. Bakr and the Baath held all the power in the coalition government and the Communist cabinet posts had no real power, but like Qasim and Arif, the party enthusiastically backed the regime. Things changed when Saddam Hussein began consolidating power in 1977 and started going after the Communists once more. Just like Qasim, the party was so attached to its alliance that it remained loyal while its followers were being rounded up. It wasn’t until 1979 that the ICP officially ended its ties with the government. Saddam went on to establish a dictatorship that would destroy the Communists. It would never again reach the heights that it achieved before in terms of followers and influence.

The Iraqi Communists developed into the largest political party in Iraq with appeal across sect and ethnicity, only to waste away that potential because of its devotion to Soviet ideology. The ICP ended up supporting every government after the monarchy because it believed countries had to pass through a nationalist period where imperialism would be thrown off and then move towards socialism. These constant alliances with first Qasim, then the Arifs, and finally the Baath ended up destroying the party as one regime after another rounded up the party’s cadres and executed its leadership. The party seemed to never learn from its mistakes. The Baath slaughtered ICP members in 1963 and yet it enthusiastically threw itself behind Bakr after 1968. Franzen provides a convincing argument that the party’s slavish following of doctrine led to its demise. It couldn’t put itself in the lead and even seemed to argue that Communist parties weren’t necessary when the Soviets came up with scientific socialism. It let itself be co-opted and then destroyed again and again. What started off as a party believing that it would lead a revolution turned into one that willingly gave up the initiative to others. That history repeated itself in 2018 as the party started making a small comeback leading the annual protest movement only to align with Moqtada al-Sadr in parliamentary elections where he gained the victory and the party received little in return.