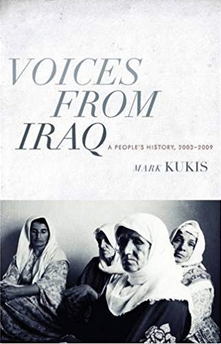 Voices From Iraq is an important book that captured dozens of accounts of Iraqis about life after the 2003 invasion. Mark Kukis worked for Time magazine in Baghdad and was inspired by Studs Terkel’s books collecting stories of regular citizens to tell the history of America. In 2008, as security improved in the country, Kukis interviewed Iraqis about their experiences, which became the basis for the book, an oral history of the Iraq War. Many accounts of the war focus just upon Americans, and if Iraqis are included it is the elite like politicians and military officers. Kukis brings the lives of regular Iraqis to the table, many of which have heart wrenching accounts of just how bad things got as their country descended into civil war.


The first section of the book focuses upon Iraqi soldiers during the 2003 invasion. Some of those interviewed were Raad Obeid Hussein an artilleryman who was in Nasiriya, Gassan Abdul Wahid Ined another artilleryman in Najaf, and Bahaa Nouri Yassen an officer in the air defense forces in Baghdad. They all told a similar account of how there was no organized resistance to the invasion. Ghassan for example was in Baghdad when the war started and travelled back to his unit only to find that it had abandoned its base and broken up into small groups inside Najaf to avoid air strikes. He never fired a shot and when the Americans entered the city he and his friends decided the war was over and they walked back Baghdad. The others had similar experiences of being intimidated by the U.S. military, and quickly deciding to go home rather than fight.

The civilian side of the invasion and the post war chaos that followed was next. Everyone talked about the bombings that hit Baghdad. Quickly looting started in the city, followed by gangs moving in to organize the stealing. One man interviewed said he collected all the weapons left around the city and turned it into a business. He even sold guns to insurgents from Anbar. The Bush administration believed that Iraqis would welcome them as liberators and that would allow them to quickly leave Iraq. Most of the people said they were happy that the Americans had come and overthrown Saddam. Their hopes were quickly dashed however by the anarchy that ensued in the capital. As a result, they became afraid of the changes happening after the U.S. led regime change.

Several politicians and government officials were talked to. That included people like former interim prime minister Iyad Allawi, parliamentarian Mithal al-Alusi, a former spokesman for Premier Nouri al-Maliki, and Azhar Abdul-Karim Abdul-Wahab who served as the Women’s Affairs Minister in 2005. Allawi said he was surprised at the poverty he found in Baghdad and in Iraq in general that was caused by the sanctions, and blamed the U.S. for having no postwar plan for the country. Alusi admitted that he was naïve about what he thought he could do in Iraq after leaving in the 1970s.  He also faced several assassination attempts starting in 2004. One such attack killed his two sons. It’s not included in the book, but the attack was organized by the Culture Minister Asad al-Hashemi who was the nephew of Vice President Tariq al-Hashemi. Abdul-Wahab was a professor at Baghdad University before the war. Many of her Sunni students started boycotting classes and resented the Ameircans. She tried to tell them that that the country needed change after all the problems Saddam brought. Many didn’t want to hear that message and said that at least Saddam was an Iraqi not foreigners that were now running the country. Despite their different backgrounds, all those interviewed found government positions and tried to improve their country. They each believed they could help Iraq through this difficult time.

Militants, both Sunni and Shiite were another group included. One man from Najaf took part in a protest during the invasion to stop U.S. forces from entering he shrine there. He went on to join the Mahdi Army. Another man was a former soldiers who felt humiliated by the war and organized an insurgent group as soon as it ended. One man from Maysan believed that American soldiers were killing civilians, formed a cell and went to Iran for training by the Iranian Revolutionary Guards Quds Force and Iranian intelligence. He returned to Iraq to carry out attacks, but eventually became disillusioned and left. Luay was a Shiite living in Fallujah. He helped mount guns on vehicles for the insurgency. When Shiites began being killed he left for Baghdad and joined the Mahdi Army. All expressed their anger at the U.S. presence and wanted to expel them from Iraq. They believed armed struggle was the only way to accomplish that. Luay was the only one who said he joined a militia because of sectarian killings.

Several people talked about how life in Iraq quickly changed for the worse after 2003. Abu Musafa worked at the Agriculture Ministry in Baghdad. After the invasion Shiite religious parties suddenly took over the ministry. He didn’t believe any of them knew how to run the agency. Sectarianism spread through the office as well with Sunnis and Shiites setting up in different parts of the building to segregate themselves from each other. Saddam was a college student in Diwaniya. The Mahdi Army moved into his university. One of their main issues was female students at the school. One day he was talking to a woman friend when a guard ordered them to stop. He got into a fight with the guard, which led to a larger brawl between those for and against the militia. Luay from Fallujah talked about how the Islamists and foreign fighters took over whole sections of the city, and began imposing their ideas like banning smoking, putting underwear on sheep so that their private parts were not exposed, and stopping markets from putting certain vegetables together because they claimed they resembled sexual organs. It wasn’t just sectarianism that spread through the country after 2003. Religious extremism from insurgents and militias was also widespread. They totally transformed living in Iraq.

Most of the book deals with the sectarian war in Baghdad as bombings, murders, kidnappings, and displacement spread across the capital. One man was a college student living in Mansour. Car bombs hit neighboring Wasash leading the Mahdi Army to come in and force Sunnis out. After the February 2006 bombing of the Shiite shrine in Samarra, the militia took over the neighborhood, leading his family to move. Ali lived in western Baghdad. After the Samarra attack Al Qaeda in Iraq put notes on all the Shiite homes in his area telling them they were collaborators and had to leave. His family went to Sadr City and then Kadhimiya. He joined a neighborhood militia, which was eventually absorbed by the Sadrists. When they began attacking government checkpoints, Ali left the group. Haifa lived in Jihad and her husband was wounded by an IED. She feared the growing violence so they moved to eastern Anbar, but when Shiites started getting attacked there the family went back to Jihad. The neighborhood was in chaos. There were not only constant bombings and gunfire, but bodies were left in the streets. They were desperate and accepted a house from the Mahdi Army in the east. Ibrahim was a Sunni in a Shiite neighborhood. His son was sick so he took him to a hospital. It was run by the Health Ministry which was controlled by the Sadrists. The Mahdi Army would abduct and kill Sunnis that used the ministry’s facilities. A doctor told him that gunmen were looking for Ibrahim so he fled while he left his son to be cared for. He later got chased in his neighborhood, so he moved to Ghaziliya. There gunmen told him his family couldn’t stay because they came from a Shiite neighborhood and thought he was from that sect. As they were leaving, masked men seized Ibrahim and tortured him for several days. They eventually believed him and he was released. Zahra was from a Shiite family in Jihad. As violence increased they moved to Diyala to escape. A sheikh back in Jihad however convinced the family to come back to protect their house from looters. The sheikh visited them with 20 gunmen and executed all of the men in the family in the backyard. They then went to the neighbor’s house and did the same thing. These stories portray the brutality of the civil war in Baghdad in gruesome detail, while also the humanity of those that lived through it. While there was endless violence around them, and the demographics of the entire city were transformed, these individuals did the best they could to protect their families, and never gave up. It is a testament to the resiliency of Iraqis.

Voices From Iraq is one of the few books in English to focus solely upon Iraqis, and mostly regular civilians and what they went through after 2003. Yes, some politicians like Allawi and Alusi are included as are some sheikhs, but the majority of those interviewed were just common people. They give a human voice to the events after the fall of Saddam. The tales of the sectarian war in Baghdad are hard to read because there is just one hardship after another as family members were killed or wounded, people constantly had to move to try to escape the violence, but it was so unrelenting the fighting would quickly catch up with them. It’s amazing the country stayed together after so much death and destruction, but it did and this book captures what happened.