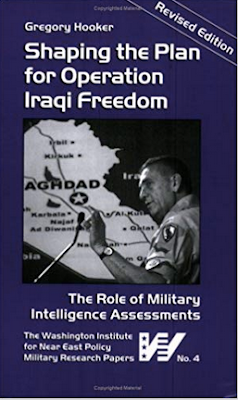 Gregory Hooker was an intelligence analyst at the U.S. Central Command (CENTCOM) who was involved in the planning of the 2003 invasion of Iraq. Shaping the Plan for Operation Iraqi Freedom goes through that process and what the Americans got right and wrong. It is a short, concise and very informative book on how civilians at the Pentagon hindered strategizing for the invasion, and how the military failed to prepare for postwar Iraq.


The first half of the book describes how demands from the Pentagon led the military to draw up three different versions of the Iraq invasion to the detriment of planning. In 2001, when the Bush administration entered office there was an existing war plan for Iraq called OPLAN 1003-98 which was largely based upon the Gulf War with the U.S. having to respond to Saddam invading Kuwait once again. In November 2001 Secretary of Defense Donald Rumsfeld ordered a new plan to be drafted based upon the U.S. attacking Iraq. It is the responsibility of regional commands to come up with such ideas so CENTCOM based in Florida was responsible for Iraq strategy. The Defense Department (DOD) made three main demands upon the Central Command. One was to drastically cut the build up time before the invasion when troops, supplies and equipment would be sent to the Middle East. Second, the DOD wanted far fewer troops than the several hundred thousand included in 1003-98. Third, some advocated for Rapid Decisive Operations (RDO), which came up with the slogan shock and awe that believed a quick and small force using high technology equipment could quickly defeat Iraq. These pressures led to three different war plans being drawn up, Generated Start finished in March 2002, Running Started completed in July 2002 and Hybrid in October 2002. Each had a shorter time plan for the war to start and a smaller invasion force. In the end though, the military agreed to starting the air war almost simultaneously with the ground invasion, but otherwise stuck to the original Generated Start plan. That was the only one that was practical to CENTCOM. All the Pentagon officials did was complicate things. The two sides never agreed upon their view of the Iraqi response to the war, which led to the drafting of three strategies. Gregory thought many of the DOD suggestions were “amateurish and unrealistic” because they were made by civilians who had no real conception of military operations. The debate over the war plan also spilled over into the public as high officials in the White House critical of Rumsfeld leaked details of the invasion to the press to try to sway the process. The author thought the pressure coming from the administration was unprecedented and had an overall negative effect because it wasted time on unnecessary scenarios.

Another important insight Gregory provides is why CENTCOM didn’t do a better job planning for postwar Iraq. He admits that the military planners didn’t spend much time thinking about Iraq after the invasion. Relief and reconstruction was considered outside CENTCOM’s prerogatives so wasn’t included. He also believed that the Bush administration was not interested in nation building, that there were conflicts between government agencies likely referring to the fallout between the State and Defense Departments, and the fact that some advocates for the invasion believed that planning for the postwar situation would undermine going to war. Finally, there was no U.S. institution whose duty was to take care of foreign countries after conflicts, which left much of the planning to various different agencies with no unity of effort. This has been highlighted in other books in much more detail that while the U.S. began thinking about postwar Iraq early on, it was done by different offices and was constantly replaced by new groups that started from scratch. The final group, the Office for Reconstruction and Humanitarian Assistance was only put together two months before the invasion with little staff and resources. It was given an impossible task, because the military and the Bush administration had done such a bad job on this part of the war.

The last part of the book is about what CENTCOM intelligence officials predicted Iraq would do during the invasion and what actually happened. For instance, they believed that Iraq would not change its deployment of forces with most of its divisions facing Kurdistan, and that proved true. Analysts also thought Iraq would attack Israel like it did during the Gulf War, launch an offensive against the Kurds, and use WMD. None of those happened. They thought sectarian violence would break out after the fall of Saddam and there would be lawlessness, but didn’t see an insurgency. Finally, they thought Baghdad would understand that a war was coming and would act appropriately, but Saddam didn’t take U.S. threats seriously until right before the conflict broke out. These were some of the basic assumptions that went into the invasion planning, and showed that CENTCOM got things right just as much as they did wrong. Gregory was a bit surprised by this outcome since Iraq had been such a focus for America for such a long time. He thought analysts like himself should have gotten more correct.

Overall, Shaping the Plan for Operation Iraqi Freedom is a very important book for understanding how the invasion of Iraq was conceived, and the issues it faced. Some in the Pentagon believed that they knew how to conduct the war, but they were mostly dismissed. The time it took to deal with all of those demands however caused problems for the overall process and a lot of wasted time and effort. Gregory believed that the final invasion could have been done better if the military had been allowed to focus more upon its original concept. He also explained briefly why things went so badly in Iraq after Saddam was deposed. The postwar situation was not considered the responsibility of the military so it largely skipped it. There was no group within the administration to fulfill that task either. It’s also interesting that it was high officials in Washington that tried to stop the Pentagon’s interference in planning by going to the media. Every White House complains about leaks, but it is often times those at the top that are actually talking to the press, and because of their positions they can simply ignore safeguards to stop such practices. At just over 100 pages Shaping the Plan for Operation Iraqi Freedom provides a lot of details in a very compact form to understand the strategizing behind the 2003 invasion.


What a disaster. If I were Bush and crew I would never show my face in public. The behavior demonstrated by them lit a still burning fire.

Rumsfeld was just horrible. Nothing worse than a boss who thinks he knows more than everyone else and wants to micromanage everything as a result.