Violence increased in Iraq from December 2017 to January 2018. That was due to an uptick in incidents in Baghdad, Diyala and Salahaddin. There were also more suicide bombers and car bombs. 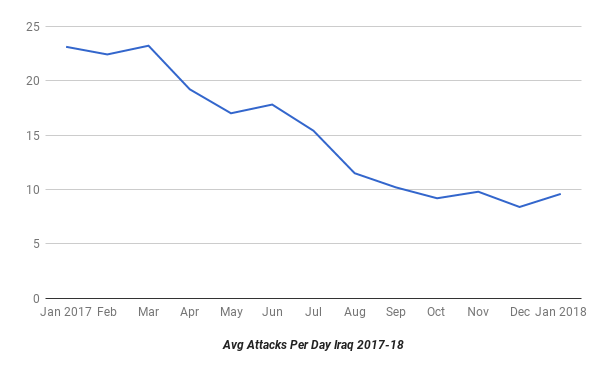 In another sign that violence was up there were 6 successful car bombs along with 7 suicide bombers. That compared with just 2 vehicle bombs and 2 suicide bombers in December. Baghdad was hit with two successive weeks of suicide bombers that left a total of 46 killed and 115 wounded.

Despite the number of incidents going up, casualties were down in January compared to the previous month. There was a total of 439 dead and 375 wounded reported in January. That was down from 763 fatalities and 300 wounded in December. 482 bodies were found in mass graves in December vs 213 in January. That meant there were 226 violent deaths at the start of 2018 vs 281 in December.

Anbar has witnessed a huge decline in attacks over the last five months. From August to September there were an average of 1.3 incidents per day. That went down to 1.0 in October, 0.8 in November, 0.4 in December, before hitting 0.3 in January. There are occasional incidents in the western regions of the province, but barely any Islamic State activity in the center or west where the Islamic State used to regularly carry out operations. There was one car bomb however during the month, which did happen in the Ramadi-Fallujah corridor. 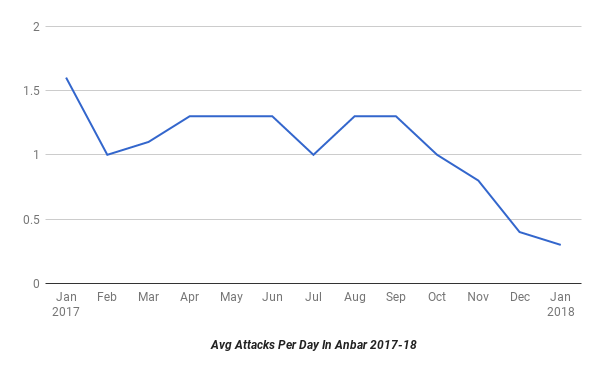 Incidents have been up in Babil since May 2017. Most occur in the north, especially Jurf al-Sakhr, which is bereft of any civilians and being used as a military base by the Hashd. During the month, two Hashd commanders were assassinated, and two car bombs detonated showing a decided shift in IS tactics.

Baghdad was where there was the biggest increase in incidents. There was an average of 3.3 per day in January, the highest amount since 3.3 in July. The militants have not only been targeting shops and markets with IEDs, but three suicide bombers set off their devices. There had not been a successful suicide bomber since November, and one of them caused more casualties than the capital had seen in such an incident in over a year. 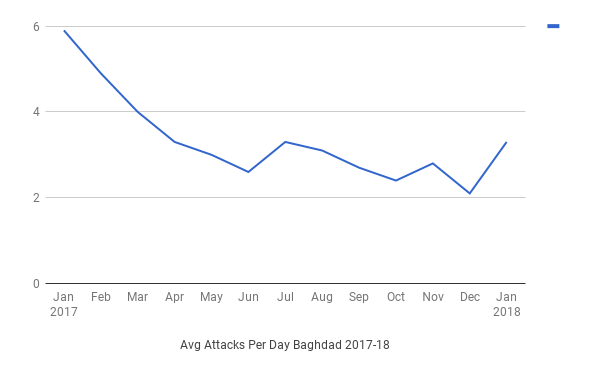 Diyala and Salahaddin are the two main rebuilding areas for IS. In the former incidents have gone up for three months from an average of 0.6 per day in October to 1.8 in January. In Salahaddin, incidents went from 0.6 during both November and October to 1.0 in January. In Diyala, insurgents are said to be active in nearly every rural area, while they are mostly in the northern sections of Salahaddin. The security forces launched 8 sweeps in Diyala and 7 in Salahaddin during the month, but to no avail. IS usually leaves during such times and comes back when they are over. The Tuz Kharmato district in Salahaddin remains unstable since the federal forces took over in October, and a new group the White Flags is active there along with disgruntled Kurds who are mad at Baghdad. 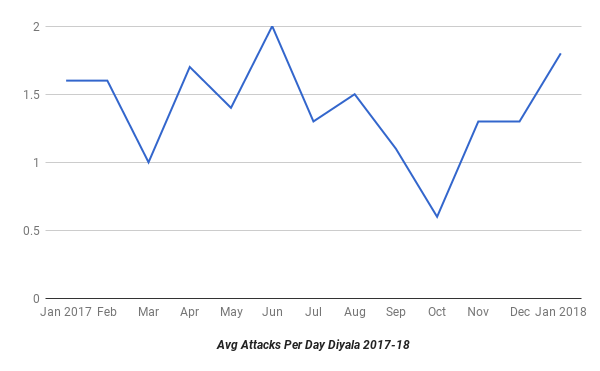 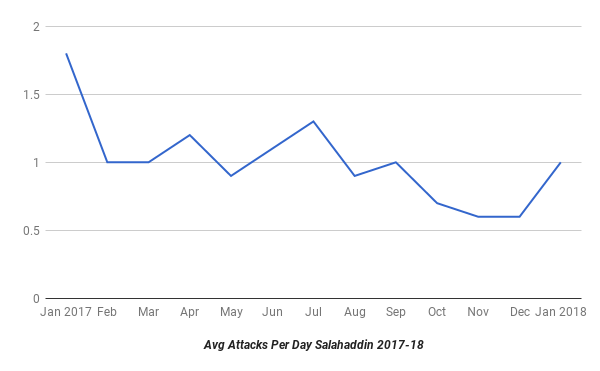 Political violence has finally subsided in Kirkuk, but the Hawija district in the south still has IS elements. After the central government took control of the province three month ago there was a wave of attacks upon parties such as the Turkmen Front. That largely ended in January. Hawija remains a problem area however. Baghdad launched a major military sweep through the area, and then two smaller ones afterward. Most of the IS fighters fled the area rather than fight when the district was liberated, and have now returned to carry out attacks. 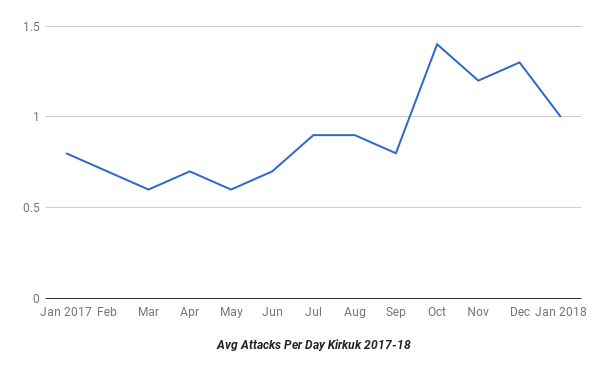 Violence continued to trail off in Ninewa. Incidents hit a new low of 1.1 per day in January. There are still regular attacks by IS along the Syrian border and to the south of Mosul, but these have mostly been very small. Most of the news coming out of the governorate is more and more mass graves being discovered full of victims of the Islamists. They provide a constant reminder of the cruel administration IS created in Iraq. 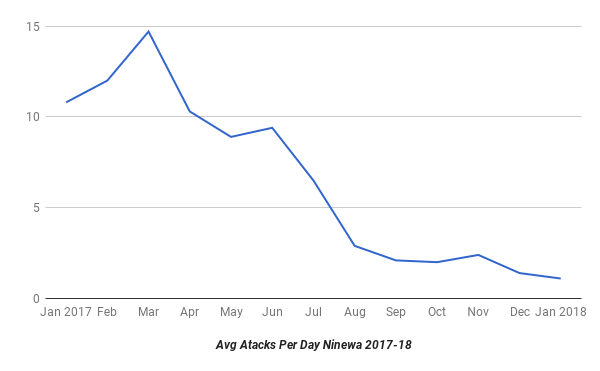