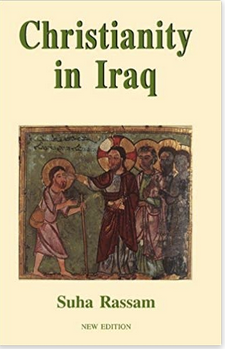 Author Suha Rassam was born and raised a Christian in the Iraqi city of Mosul. When she went to school in London she started researching her roots, which led to a Master’s of Arts in Eastern Christianity. That eventually resulted in Christianity in Iraq, an attempt to document all the different Christian communities that emerged in Iraq over the centuries.


Most of the book focuses upon the theological and political differences that led to various churches being formed in Iraq. Christianity first arrived in area in the 1st Century to the kingdom of Osrhoene that ruled over western Iraq and eastern Syria, and was a subject of the Persian Parthians. The new religion was probably brought by Jewish converts that spread the ideas within their community. These first followers spoke Aramaic, and the dialect they used was known as Syriac. The community eventually became known as Syriac Christians. In the 5th Century the church was recognized by the Sassanics leading it to be called the Persian Church and then the Church of the East. This was the start of the church’s split from the western churches that were followers of the Byzantines. By the 6th Century the Syrian Orthodox Church broke away from the Church of the East, and became based in Tikrit, and then moved to Mosul. In the 1400s there was an attempt to unify the Church of the East with the Roman Catholic Church in Rome. That failed, but some new churches were formed, which became known as Chaldeans in the 19th Century. Around the same time, the Syrian Catholic Church was founded, and American and British missionaries led to new Protestant churches in Ninewa. Finally, in the 1960s there was another split in the Church of the East that led to one branch being called the Ancient Church of the East, and the other the Assyrian Church of the East. Over the years, the entire community became based around Mosul and its surrounding towns and in Baghdad. That history led to the current diversity of Christian groups in the country from the Assyrians to the Chaldeans to Protestants.

The other major theme of the book is the persecution of the Christian community, which has happened continuously up to the present day. The first time that occurred was under the Sassanids. Initially Christianity spread through the empire, but eventually, due to conflicts with the west the Sassanids massacred thousands of them claiming they were loyal to the Byzantines. King Shapur II alone is accused of killing 16,000 Christians. In the 7th Century Iraq was conquered by the Arabs who were at first welcomed with Christians specializing as doctors and Greek translators for the Abbasids. By the 9th Century tolerance of the community waned, and laws and taxes against it became more oppressive. This history was repeated with the Mongols, then the Safavids, and then the Ottomans who that at first liked the church, but then turned on it, and killed and persecuted its followers. In 1921, the British brought Assyrian refugees from Turkey and Iran to the new Iraq Mandate. Some of that community demanded their own country, which was rejected by Iraq, and led to a 1933 massacre by the army. In 1959 there was an attempted coup against General Qasim in Mosul, that led to a temporary Communist take over of the city and attacks upon Christians that drove a majority of the population out to the surrounding towns and towards Baghdad. There was a mass exodus out of the country to Europe, America and other countries during Saddam’s dictatorship. Finally, after 2003 Islamist insurgent groups especially Al Qaeda in Iraq attacked the church leading to another wave of Christians to immigrate. All of this history has largely devastated what was once one of the largest Christian communities in the Middle East. The majority of Iraqi Christians now live outside of the country as a result.

The creation of different branches of Christianity and its history of persecution represent the best parts of the book. Where Rassam falters is when she goes through all the texts, leaders, martyrs, churches and schools. Many times this descends into long lists, which is not the most interesting reading. For example, towards the end the author covers all the current churches, and their monasteries, archdioceses, schools, etc. Since the community has decline so much over the years, it’s important to collect all this information, but it makes for very dry reading.

Overall, Christianity in Iraq achieves Rassam’s goal of documenting one of the Middle East’s oldest Christian communities. It’s also less than 200 pages of text so it’s a quick read. The community suffered another calamity in recent years when the Islamic State took over Mosul and much of Ninewa in 2014, which is where many Christians live. This again led to an exodus out of Iraq reducing the church one more time. Since so many followers have left Iraq it was important that Rassm collected this history when she did.