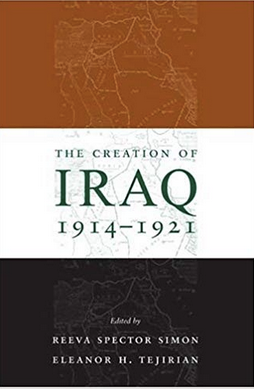 The Creation of Iraq was the result of a 2003 conference at Columbia University on the making of modern Iraq. The hope was that this history, especially the British Mandate could provide lessons to the Americans that were embarking on their own occupation of the country. The papers presented at that meeting were compiled into this book published in 2004. There are chapters on the three Ottoman provinces of Basra, Baghdad and Mosul that would become the new nation, the major countries involved in its formation, and issues such as the Kurds and oil. At just over 160 pages of text, this is a very short and concise history with some great insights on how Iraq came about.


The British occupation of Iraq came about largely by chance. Originally, English forces landed in Basra to protect its oil interests in Persia. The British than decided to march north and take as much as it could. That included Mosul that was seized after the armistice ending the war was signed. The British claimed they were not conquerors and promised Arab independence. The India Office had other plans wanted to annex southern Iraq and eventually leading to the British Mandate given by the League of Nations. These unmet pledges quickly led to anger and the 1920 Revolt in southern and central Iraq. That changed London’s plans to setting Iraq on the path towards independence. The Bush administration was completely ignorant of this history but could have learned so much from it. Just like the British, the Americans came into Iraq with little plans for a long term occupation, and its presence led to immediate resistance with not only the insurgency but the Sadrist uprisings.

The next chapters deal with how Iraq’s borders were created. Many still believe that the Sykes-Picot agreement made between London and Paris created the modern Middle East, but that’s not true. While it set the stage for the carve up of the Ottoman Empire, the actual borders were made largely via negotiations over several years. The Iraq-Iran border for example was up in the air at first, because Persia did not appreciate the creation of the new country, but the two eventually signed a treaty in 1937. The Turks laid claim to Mosul and the issue was taken up by the League of Nations but Ankara eventually decided to cede the province for larger goals of friendship with England so that it could deal with more important issues such as fighting off the Greeks. The British also made a deal with France that in return for a share of Iraq’s oil it would not make any claims on Mosul province. The Russians were also just north of Mosul city during World War I and were making claims to Ottoman territory as well. The Russian Revolution however led Moscow to withdraw its forces. In 2014, the Islamic State made a video of its fighters tearing down a berm on the Iraq-Syrian border and claimed that it was reversing Sykes-Picot. The myth of that deal still holds the imagination of many in the Middle East. Iraq however was not created by that agreement, but rather through this series of events. While the book covers the northern and eastern boundaries, oddly it didn’t include anything on Syria to the east.

Finally, oil and the Kurds are covered. England was interested in oil concessions in the Ottoman provinces before World War I started and signed an agreement for the Turkish Petroleum Company that was never finalized because of the start of the conflict. During the war British officials in London talked extensively about gaining petroleum fields, and that was realized when it got Mosul included within Iraq. Some Kurdish experts would disagree about the chapter on that community. The author argues that there was a Kurdish national movement that wanted independence, but at the same time notes that the leaders such as Mahmoud Barzanji fought other Kurds and was only popular in his home area of Sulaymaniya. Barzanji also rallied people based upon his tribe and religion, which is another sign that nationalism wasn’t really the issue at this time.

The one chapter that doesn't fit with the rest is the last one on the United States. America had no Iraq policy, and went into an isolationist phase at the end of the war. The section therefore is more about the U.S.’s interest in the Middle East in general such as religious missionary work there. This reads like a conference assignment where America had to be included even though it really wasn’t relevant.

The Creation of Iraq is a good start for anyone interested in how Iraq was put together, its borders drawn, and how the British Mandate led to independence. The first couple chapters provide great parallels to what the Americans experienced when it invaded in 2003. To this day many Americans and westerners in general are ignorant of this history. Every chapters is interesting, and short to boot. One can learn a lot and use it as a jumping off point for further research.