Review Oil and Democracy in Iraq 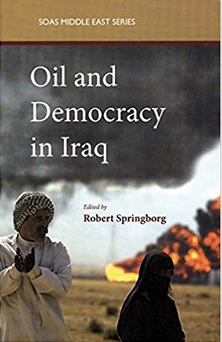 Oil and Democracy in Iraq is now a dated book. It begun as a result of a commission formed by the British Department for International Development in 2003 to help plan for the future of Iraq’s petroleum industry. It was later revised and published in 2007. In 2009, Iraq held a series of auctions and signed the majority of its deals with international oil companies (IOCs) making this book moot. A reader needs to understand what happened after the book came out to value it and see the roads not taken by Iraq. Without that knowledge this book would be of little use today.


The volume is divided into five main sections. The first is an overview of the oil industry in 2006 before it signed contacts with foreign companies. The second is the challenges of oil dependency. The third is how to allocate its oil revenues. Fourth is the types of ownership Iraq could choose from. The appendix provides examples of developing countries that decentralized their economies, which Iraq might have considered.

Oil dependency also known as the Dutch Disease has a number of deleterious effects upon countries like Iraq. Most importantly oil revenues make governments independent of their public and thus unaccountable. They also tend to give rise to authoritarianism as seen by the series of military leaders Iraq experienced after the monarchy followed by the Baath period. After 2003 Iraq had the chance to remodel its economy to try to avoid these problems, which was the point of this book to go over what the country could pick from. Unfortunately it made few changes maintaining the country’s dependency, and all the problems that result from it.

When it came to allocating petroleum funds and ownership of the industry the country could picked from public or private and centralized and decentralized options. For distributing oil wealth for example, the country could have revived the Iraq Development Fund which existed during the monarchy and took a percentage of oil money and spent it on large capital intensive projects. It could have earmarked revenues for social programs. It could have given profits to provincial and local governments to decentralize power or the central government could have acted as an investor in private enterprises. Finally, Iraq could have followed the Alaska model and directly distributed money to the public. There are pluses and minuses to each of these options. The Iraq Development Fund for example didn’t carry out the types of projects that would provide immediate benefits to the public nor the jobs that were needed in a rapidly expanding and more educated population. The book correctly predicted that Iraqi officials and populace would maintain a form of public ownership because privatization would be seen as turning over the industry to foreigners. However it suggested that the Oil Ministry enter into Production Sharing Agreements (PSAs) that would allow a standard form of partnership with private concerns that many other countries followed. Instead, Iraq offered Technical Service Agreements (TSAs) claiming the public would oppose PSAs as a step towards privatization. While TSAs did boost production it was nowhere near the figures originally claimed by Baghdad, and has caused problems with oil companies. As a result, they have been revised and new terms have been offered in the latest contracts. More importantly all the profits were maintained and distributed by the state empowering the Iraqi elite, opening it up to their patronage networks, and providing plenty of opportunities for corruption. These were exactly the circumstances the authors hoped Iraq would avoid. This is the type of prior knowledge readers need to know to appreciate Oil and Democracy in Iraq. Without it the book just reads as a series of suggestions and options with no idea of which ones Iraq eventually picked, and what that meant for the industry.

It’s hard to say whether Oil and Democracy in Iraq really has value to readers today. With Iraq having made its choices and largely ignored the options made, it is really only worthwhile for those interested in Iraq’s energy sector, and even then perhaps only for research papers.