Review Quicksilver War, Syria, Iraq and the Spiral of Conflict 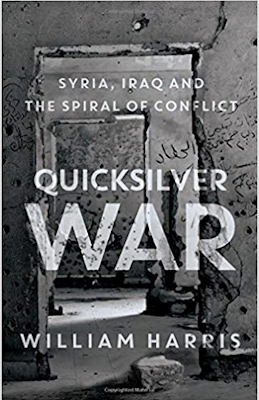 Looking for a really short introduction to the wars in Syria and Iraq? Quicksilver War, Syria, Iraq and the Spiral of Conflict would be a good start. William Harris a professor of politics at the University of Otago, New Zealand gives a brief, only 174 pages of text, overview of how the two wars joined together, peaking with the Islamic State announcing its caliphate across both countries, up to the group’s defeat in Iraq and the continued civil war in Syria up to 2017.


Harris believes that starting in 2011 Syria and Iraq started down a path towards conflict that would unite the two in 2014. In Syria, peaceful protests against the Assad regime in 2011 were met with repression leading to a rebellion that exploded into a full fledged civil war. In Iraq, the U.S. military withdrew and Prime Minister Nouri al-Maliki went after Sunni politicians leading to growing discontent with his government. That allowed the rebirth of the insurgency, which was eventually subsumed by the Islamic State. That group also saw opportunity in the brewing war in Syria and joined that conflict. The growth of IS and other jihadists in Syria would lead to constant in fighting amongst the rebels, and the undermining of any hope of overthrowing Assad as groups would fight each other as much as the government.

The wars brought in regional powers like Iran, Turkey, Saudi Arabia, Qatar, etc. and the U.S. and its allies, plus Russia. The U.S., Russia and Iran were mainly responsible for propping up the Iraq and Syrian governments and eventually turning the tide in their respective wars. Harris believes that the Russians had a grand strategy at work in Syria, which was to reassert itself as great power, and determine the future of the conflict, which it has largely been able to do. The U.S. however, from Obama into the Trump administration had a deeply flawed view that it could turn rebels against the Islamic State and ignore their real goal, which was overthrow Assad or create their own autonomous region. The author had no confidence that Washington would maintain its interest in the conflict.

The wars also created opportunities for the Kurds in both countries. The Democratic Union Party (PYD) in Syria and the Kurdistan Regional Government (KRG) in Iraq were able to seize upon the chaos in their respective countries and gain territory. The KRG moved into disputed areas such as Kirkuk when the Iraqi forces withdrew in the aftermath of the Islamic State seizing Mosul. In Syria, the PYD carved out its own area in northeastern Syria. While these were huge successes for each party, their long term prospects were in question. The PYD’s expansion was largely due to its alliance with the Americans. If the U.S. decided to end its involvement, the PYD would be open to attack by any number of groups especially the government. In Iraq, the KRG occupied a large number of areas that it originally claimed as Kurdish, but then its hubris got the best of it, and it held an independence referendum in September 2017. That led the Abadi government to send in federal forces and take back Kirkuk and all the other territories. The Iraqi Kurds were first talking about having negotiations with Baghdad about their position within the country, but then switched to the referendum, which completely backfired. All its allies such as the Turks and U.S. warned them against carrying out the vote, but the KRG went ahead anyway and paid the price. Both situations highlight the precarious standing Kurds occupy in Iraq and Syria despite whatever short term gains they may make.

The one area where Harris runs into problems is his chapter on Turkey. He writes that President Recep Erdogan has followed a neo-Ottoman policy in Iraq and Syria attempting to portray itself as the protector of Sunnis, while constantly worrying about the rise of the Syrian Kurds. What undermines this section is that he constantly refers to Byzantine kings and Ottoman sultans to drive home his point. That’s unnecessary and overdoing it.

Harris provides a very straight forward and conventional view of the two wars. There is neither anything controversial nor new in Quicksilver War. This book is not aimed at long time Iraq or Syrian watchers, but rather a novice looking to educate themselves about what happened in the conflicts in the two nations. It does a good job in accomplishing that goal.