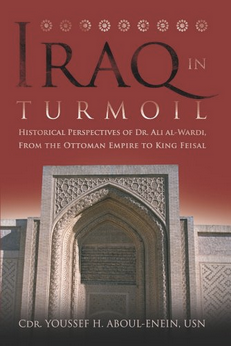 Iraq In Turmoil is based upon U.S. Navy Commander Youssef Aboul-Enein’s reading of Dr. Ali al-Wardi’s eight volume Social Glimpses of Iraqi Modern History. The commander believed it was important for the American military to understand the countries and societies they were operating within. That led Aboul-Enein to originally sum up the main points of each of Wardi’s books in the U.S. Army’s journal Armor. Those pieces were then collected together in Iraq in Turmoil, with an introduction by an American officer that starts off each chapter. Although Wardi’s massive 3,000+ pages collection claims to be a history of Iraq, it is actually about the entire region starting with the Ottoman Empire to the beginnings of Iraq, Syria, and Saudi Arabia. That meant while Aboul-Enein wanted to educate U.S. forces about Iraq, it is less than half the book.


One is immediately made aware of how vast Wardi’s writing was from the first few chapters. He starts with the Sunni-Shiite split in early Islam, then the Ottoman-Safavid rivalry and wars in the Middle East, the entry of France and England into the region in the 1800s, and then Ottoman attempts at reforms. Iraq is only given scant coverage during these chapters. What is mentioned is the beginnings of Arab nationalist groups within the Ottoman empire, Governor Nazim Pasha who was appointed to Baghdad province in 1909 and began a series of civic works projects such as filling trenches in Baghdad city that had spread disease, and building locks and dams aimed at stopping the annual floods that hit the province. Nazim was an excellent politician and worked with Sunni and Shiite clerics to issue a fatwa against tribal raids which were common. He was an exception however to most of the officials appointed to run the area. These events are only given minority treatment however.

The following chapters are about the impact of World War I and how it created the modern nations of the region. All the major fronts the Ottomans fought in the war are covered including Iraq, which was completely neglected, and mismanaged by the Ottoman officers leading it to be conquered by the British. Wardi spent a huge amount of time covering the 1920 Revolt which was in response to Britain promising Arab independence only to set up a League of Nations Mandate to rule Iraq. Aboul-Enein gets a little mixed up on the origins of the revolt, as he mentions the tribal uprising in Fallujah as the start twice, but then later corrects that by saying that it started in the Mid-Euphrates in southern Iraq. The separate attempt by former members of the Arab Revolt during World War I, that moved from Syria and attacked the British in Tal Afar and Mosul is also included. These chapters are the only ones in Iraq in Turmoil that really focus upon its topic, Iraq.

The concluding chapters again go through the entire region. For instance, in covering the British appointment of King Feisal in Iraq by the British it goes through his role in the Arab Revolt against the Ottomans, his attempt to set up a monarchy in Syria, all the sheriefs of Mecca, which was what his father was, and the rivalries between his father and Ibn Saud, and how the war between the two would lead to the creation of Saudi Arabia. Again, this is another example of how Wardi really wasn’t writing about Iraq, but the Middle East in general.

Commander Aboul-Enein wanted to explain the politics, history and culture of Iraq to American officers during the U.S. occupation, so that they could gain a fuller understanding of the country they were working in. His book largely failed to do that because his source material, Wardi’s Social Glimpses of Iraqi Modern History wasn’t really about Iraq. Wardi’s books were simply too vast in content to achieve Aboul-Enein’s goal. He would have been better off with some other Iraqi history.