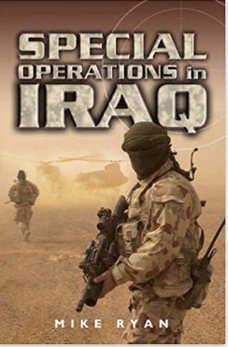 When you read this book two things immediately come to mind. First, where was the editor? and second, how did this ever get published? As the title suggests, Special Operations in Iraq is about the various Coalition Special Forces that took part in Operation Iraqi Freedom. The problem is there is no organization within many of the chapters, nor how the chapters are arranged, and author Mike Ryan completely failed in covering the large number of Special Forces deployed during the war.


The lack of editing is seen right off the bat. Chapter 1 starts with an account of the Australian Special Forces that operated in Anbar hunting down Iraq’s SCUD missiles. First hand accounts are then given by members of the Royal Marines who were deployed to Basra during the invasion, an unknown special operative in Kurdistan, a British Special Air Services (SAS) solder, and then a British Special Forces member. These short descriptions read like an introduction to the following chapters that could go over a brief history of the Special Forces that fought in Iraq and then what exactly they did during the war. Instead, Chapter 2 includes brief overviews of the British Special Boat Service and Helicopter Special Operations unit, and then the killing of Uday and Qusay Hussein in Mosul after the invasion. Then there’s a chapter on the capture of their father Saddam Hussein in December 2003. The Fourth Chapter is called “The Operators” and includes the SEALs, the Australian Special Air Service (SAS) Regiment, Poland’s GROM amongst others, but also the U.S. 101st Airborne Division, which is not a Special Forces unit, and the Israeli Caesarea but doesn’t say whether it served in Iraq. It quickly digresses into various tangents such as the rescue of Private Jessica Lynch during the invasion, various unit histories, and the Ranger’s Creed and its “19 Standing Orders.” The dysfunction continues with chapters on the future of warfare that isn’t about Iraq, the Coalition command and control system during the war, and then one on how special forces are selected and trained, both of which should have gone towards the beginning. There is literally no rhyme or reason to how this book is put together. There is no train of thought that holds each chapter together. At its best there are a few hints at what the various Special Forces unit did such as the Australian Special Forces capturing the Asad air base in Anbar during the invasion without a fight. At its worst it is a hodgepodge of stories and facts many of which are not about the fighting in Iraq.

Special Operations in Iraq is a completely unorganized and scattered account of some of the Coalition Special Forces that took part in Operation Iraqi Freedom. There are several first hand accounts of soldiers, but those don’t tie into a larger narrative of what units were involved or what exactly they did. The chapters skip from topic to topic in a maddening manner. It makes one wonder if an editor even took the time to check anything but grammar and punctuation. The best part of the book are the extensive pictures that were taken during the war that highlight the equipment used.


Well this review saves me some money and time. Definitely a fluff piece. Thank you.