Review Target Basra, The High-Octane Story of the Royal Marine Commandos In Iraq 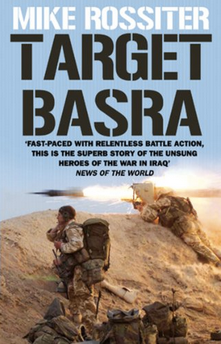 Target Basra focuses upon the 40 and 42 Commando of the 3rd Commando Brigade that were deployed to Basra province during the 2003 invasion of Iraq. They were two small units of Royal Marines whose task grew from seizing oil facilities along the Persian Gulf to entering Basra city and governing two towns after the invasion was over. The book is fast paced and describes how the British forces went from small tasks to huge responsibilities that they were never planned for.


When the British first heard that the United States was planning to invade Iraq they wanted to be included. in April 2002 Prime Minister Tony Blair met President George Bush in Texas and pledged British support for whatever the U.S. had planned for Iraq. Afterward the British military were instructed to start drawing up military plans. Since the U.S. wanted to make a charge for Baghdad, the English were given the task of taking Basra province which included one of Iraq’s biggest cities and the majority of its oil industry. 40 and 42 Commando were to work with U.S. Navy Seals and Marines, land in the Fao Peninsula and seize the oil facilities there.

It’s been said that military operations rarely go according to plan, and that was true for the Royal Marines. American SEALs landed first at the tip of the Fao Peninsula and got into a firefight with some Iraqi forces, which delayed 40 Commando going in. Then they couldn’t clear the beach of mines, which cancelled a plan to have light Scimitar tanks be shipped in. 40 Commando also had little intelligence on what forces they would face and it turned out there were several hundred Iraqi soldiers around the oil infrastructure, completely outnumbering the Royal Marines. After they pushed the Iraqis out they were then told to take Fao town of 25,000 people with just 105 men. Despite the size of the town and some fierce resistance 40 Commando were successful. 42 Commando were to take helicopters in and provide a blocking force north of the oil installation. The Americans suddenly refused to provide helicopters so the Brits had to use their own which meant far less equipment could be used. They also couldn’t land where planned and had to march most of the way to their area of operation. Again, they ran into far more resistance than expected including Iraqi T-55 tanks. The Commando were then given several new jobs including seizing Um Qasr and its port, clearing the rest of the Fao Peninsula, and then moving into Basra City. This was a huge area for two small units to cover, but they did. Eventually they took Abu al-Khasib a southern suburb of Basra City, and entered the city itself. What was originally supposed to be just a small landing at the tip of the Fao Peninsula turned into a march north to take one of Iraq’s major urban areas. There were some tragedies along the way such as two helicopters crashing into each other and the loss of their crews, but the two Commando suffered few casualties during the invasion. They were able to achieve a string of military successes despite having very few men.

The rapid expansion of 40 and 42 Commando’s responsibilities, none of which were really planned for, would continue after the invasion was over. They were given control of Abu al-Khasib and Fao town. They made patrols, tried to provide supplies to the Iraqis such as drinking water and fuel for generators, and they created town councils, while at night they conducted raids to hunt down Baathists they believed were still carrying out attacks against them. There was no system set up to provide services however, so when then the Commando shipped out in April 2003 to go home, the councils they created lost standing because they could do little by themselves. There was also immediate looting after the fighting ended, which quickly became organized stealing by gangs and tribes. The intelligence they got from locals became so numerous the Brits were convinced people were simply trying to settle scores against their enemies using the Royal Marines. This was all made worse by the fact that the Commando never made any plans for post-war Iraq, and received no orders on what to do from their superiors either. Everything was done on the fly, and a vacuum was created when the Commando withdrew. That space would be filled by Shiite religious parties and their militias, which seized control of Basra and its economic wealth. That would lead to years of chaos.

Mike Rossiter provides a good war story on the 3rd Commando Brigade during the 2003 invasion. The unit was given more and more tasks in a larger and larger area, which they tackled with great success. At the same time, most of what they did was not in the original war plan. Afterward, they were told to govern two towns in Basra with no orders on what to do. Again, they did the best they could, but they quickly ran into problems providing services, security and governance because London and their U.S. ally had no real post-war strategy. Target Basra therefore does more than just provide a glimpse into one unit taking Basra, but gives a taste of how Iraq ran into so many problems after the fall of Saddam Hussein.