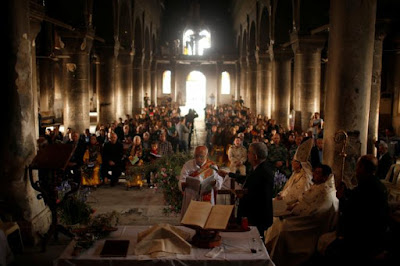 Palm Sunday services held for first time in three years in church in Qaraqosh, Ninewa, which was burned by Islamic State (Reuters)

The Iraqi forces (ISF) are only carrying out minimal operations in west Mosul in preparation for an impending big push to seize the Old City district. On April 8 the Federal Police claimed it achieved a breakthrough in the Zinjali neighborhood in the Old City. The police said this cut off some Islamic State supply routes to the area. The next day Federal Police commander General Shakir Jawadat stated that 60% of the defenses around the Grand Mosque in the Old City were destroyed. Iraqi propaganda is anything but consistent since Golden Division General Abdul Wahab al-Saadi was quoted in the press a week before that all the defenses were breached. Whatever the percentage is the Iraqi police have been inching towards the mosque for weeks now. Finally the Golden Division seized the Matahen neighborhood in central west Mosul. That unit has been moving up the western and central section of the city to try to encircle the Old City, which is now surrounded on two sides by the ISF with a third running along the Tigris River. The final push into this area should be coming soon. According to Al Mada the operation was supposed to have already started, but was delayed due to heavy civilian casualties.


There were more reports of executions and chlorine attacks by the Islamic State in Mosul. The group allegedly executed 50 for trying to flee inside the city. Baghdad Post also claimed that mortar shells filled with chlorine hit two neighborhoods that sent 70 to the hospital. There are similar stories nearly every week, but none of them have been confirmed. IS has used chlorine before.

IS also picked up its operations in liberated east Mosul. Three suicide bombers were arrested, and two more were killed attempting to attack the Salam Hospital. The insurgents shell the east nearly every day, but this was the first report of suicide bombers for quite some time. With less fighting going on in the west, perhaps the militants thought they could spare some bombers to try to hit the east.

Finally, Palm Sunday was celebrated for the first time in three years at a church burned by the Islamic State in Qaraqosh, Ninewa. Unfortunately, the town is mostly deserted with the churchgoers driving in from Irbil where they fled to when the Islamic State seized the area in 2014. The Ninewa Plains used to be full of Christian communities, but many were destroyed by the IS offensive three years ago. Few have returned as most of the villages are destroyed, there is little to no rebuilding going on, and many have started new lives in Kurdistan and feel safer there. This is just one example of the demographic changes the Islamic State has brought about in the country.

New Sabah, “Daesh front lines destroyed near the Great Mosque and Hadbaa lighthouse in Mosul city,” 3/27/17
- “Federal Police break the front lines of Daesh in the Zinjali neighborhood in Mosul,” 4/8/17

It's a major reason why the Iraqi police halted their assault upon the district a few weeks ago. They literally got stuck and the heavy civilian casualties made them pause.