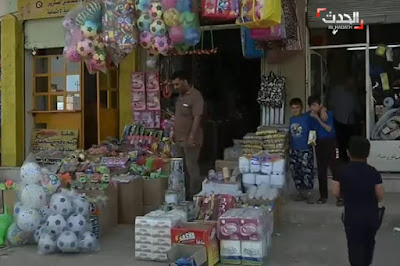 Life after the Islamic State in Mosul. Toys were banned by the group, but now for sale in east Mosul (The Sun)

April 29 the Joint Operations Command announced that there was a small advance in the Old City. The Federal Police and Rapid Reaction Division moved from 300 to 200 meters within the Grand Mosque in the district. In a rare occurrence, the Iraqi forces announced losses in the day’s fighting. 14 Federal Police were killed, and 20 wounded by a series of suicide bombers. Four more were killed by sniper fire. The Golden Division and police were also attempting to take the Zinjali neighborhood, which would further surround the Old City. The police have been assaulting the Old City for nearly two months. The fight has been very difficult sometimes involving room to room combat. The main job of the police has been to hold down the Islamic State, while the Golden Division took the center of the city. A member of the Ninewa council told Al Mada that strategy remains in place to bypass the district, and seize the rest of west Mosul.


The chief of staff of the Iraqi army, General Othman al-Ghanmi believes that all of Mosul will be freed in three weeks before Ramadan. It took nearly three months to take roughly 60% of the city, so that estimate may be too optimistic.

An American soldier was killed by an IED outside of Mosul. No further details were revealed. The Trump administration has allowed U.S. Special Forces to be forward deployed with the Iraqis and are operating inside and out of Mosul. A few Americans have been killed and wounded in Iraq since 2014 when they were re-deployed to the country to fight the Islamic State.

Al Mada reported there may be a split between Prime Minister Haider Abadi and the Hashd. Recently those forces moved from Tal Afar towards the Syrian border, seizing the Hatra district. The premier said nothing about this gain, when he regularly makes remarks about the latest victories. Al Mada speculated this was because the army’s 15th Division was supposed to accompany the Hashd, but didn’t. There have been differences between the Hashd and Baghdad before. The former has been increasingly frustrated by the fact that Abadi has not allowed them to take Tal Afar because of Turkish complaints. Still, the Hashd regularly coordinate with the Iraqi security forces, so more information will have to be reported to determine what happened.

There has been new displacement from the Tal Afar district. More than 6,000 have left the area since April 21. A new section of the Hamam al-Alil 2 camp has also opened. All the camps south of Mosul were either at capacity or overflowing, so this new addition was welcomed. The United Nations is building another camp in the area as well.

Knox, Patrick, “Hope In Hell, Life slowly returns to normal in Mosul as Iraqi forces pull down chilling ISIS posters and re-open toy shops after they were banned by fanatics,” The Sun, 4/29/17

Al Mada, “Commander in Chief remains silent despite days after the liberation of Hatra,” 4/29/17

Al Sumaria, “The federal police announced the killing of 30 terrorists and the destruction of 12 targets in the vicinity of Al-Nuri Mosque in Mosul,” 4/29/17

This Day In Iraqi History - Jun 19