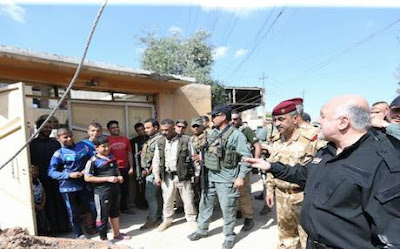 Iraqi propaganda again obscured what was going on in west Mosul. First, the Golden Division freed the Thawra neighborhood in the center of the city on April 18. Then on April 19 a spokesman for the Rapid Reaction Division claimed that 30% of the Old City had been taken, while a police major had it at 40%. The major said this was the result of 38 days of fighting in the district. The police have largely been on pause for the last month however, and no neighborhoods were named as being liberated. The Federal Police also reported that it was destroying Islamic State sites in the district, fighting in Farouq Street like they have for weeks now, and attempting to connect with the Golden Division in Thawra. All the previous reports had the police advancing block by block with no large sections being seized. To add to the confusion, the daily map released by the government showed the Golden Division’s latest movement in the center of the city, but no change in the Old City. Not only that it had new sections in the north being taken, yet this was not announced in any press releases. Recently the 9th Division and Hashd took the towns that were just outside of the city, but nothing else has been heard from them since then. The Iraqi government is notorious for exaggerating and making claims before they happen and it would seem this was another example. 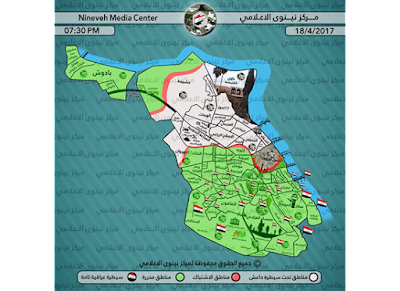 Prime Minister Haider Abadi visited the Ninewa Operations Command and walked through part of liberated east Mosul. Besides the photo opportunity this was an important move for the leader of the country to be seen in the city and showing his concerns for the population. While the east is liberated and the citizens have shown huge determination to restart their lives there are still major problems. There’s been no serious rebuilding, there are no services like water and electricity, few jobs are available, government workers who are back are not paid, and there is a lack of cash as a result leading most people to buy on credit or borrow from others. Baghdad and the Ninewa government claim they have a plan to put Mosul back together, but there are little signs of it yet.

Al Mada had an article on Tal Afar. The town was surrounded by the Hashd months ago, but nothing has happened since. It is still up in the air whether the Hashd or the Iraqi forces will take the village. Turkey has warned against the latter being involved. What is obvious is that will not happen until Mosul falls. Al Mada talked with a Turkmen parliamentarian who was quoted that Abadi did not want to anger Ankara anymore and that was one reason why nothing has happened. The MP speculated that Baghdad would have to get the Americans involved in any future operation, and that would take care of Turkey’s concerns.

The Canadian Broadcast Corporation was allowed to talk to two captured IS members in east Mosul. Both claimed they had joined to buy medicine for their sick family. They also said that they had only menial jobs. One was a cook, and another was a guard. Their jailor didn't seem to believe them. He stated all insurgents lied about what they did so they would not get in more trouble. Over 1,000 IS suspects have been arrested. Many are detained at Hamam al-Alil where displaced are first screened after leaving Mosul. Others are picked up in the constant raids that are being carried out in east Mosul. They are supposed to see a judge to determine their cases, but the staff is very small and overwhelmed with the number of cases. That will mean many of these men will stay in detention indefinitely, and even ones that are referred to court may far no better due to a lack of capacity.

Finally, there were more civilian casualties in the city. The Islamic State fired mortars at both east and west Mosul leaving 6 dead and 18 injured. Iraqi shelling and coalition air strikes were blamed for another 50 killed and 57 wounded. All sides are contributing to the growing number of civilians who have lost their lives and been injured in the fighting.