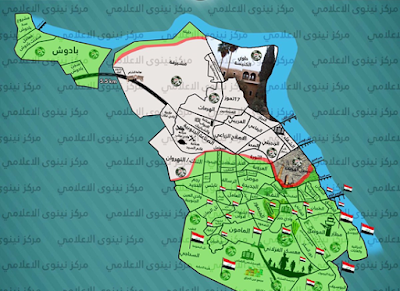 The Iraqi police were still attempting to seize the Grand Mosque in the Old City district of west Mosul. They were fighting in the Farouq neighborhood of the district. At the same time, the Islamic State counterattacked and forced them out of the Kornish Street area. The police spent the day attempting to drive off the insurgents. The Iraqi police only recently restarted their effort in the Old City after a month long pause. Their progress has still been extremely slow due to the tough defenses of the Islamic State and the dense layout, which has reduced most of the fighting to house to house, room to room.


The Golden Division was still pushing into the center of the city. It was fighting in Tank and Thawra, which have been contested since the end of March.

A Ninewa councilman claimed that the Iraqi forces (ISF) controlled 75% of west Mosul. Iraqi officials are always using different metrics for these types of statements. Sometimes they count districts, other times its area, and sometimes they just make up numbers as part of propaganda. From government maps it looks like roughly 60% of the western section of the city is in government hands.

The Iraqi air force dropped leaflets over west Mosul again. The flyers told civilians to protect themselves during the siege of the city. The ISF has done this several times before, usually before a major operation begins.

A report by Iraq Observatory for Human Rights noted that the Islamic State is using food to control the population of west Mosul. Many people are starving in the city due to sever shortages caused by the ISF’s encirclement, which cut off the militants’ supply lines. IS is offering food to recruit people and to get them to follow its orders. The severe conditions is shown by the fact that many of the displaced coming out of the city are suffering from malnutrition, especially children.

The Ninewa Operations Command reported another chemical attack by the insurgents in west Mosul. Mortar shells filled with agents hit the recently freed Abar neighborhood for the second time on Sunday.

There is still scattered resistance to IS inside the areas under its control in the city. A group attacked an insurgent prison, killed three guards, and released 7 detainees. Opposition groups have carried out off and on attacks upon the militants for months now, but don’t appear to be a real threat to them.

Finally, 50 civilians were reportedly killed and 51 wounded by airstrikes across western Mosul. The Iraqi forces said they would be more careful in their strikes in the city after the Jadida incident killed over 200 people. Many times people are hiding in basements to escape the fighting or IS is using people as human shields. All the ISF see are the insurgent fighters however and call artillery, mortars or air support often resulting in civilian casualties.

NINA, “Nineveh operations confirm the use of /Daesh/ to shells carrying chemicals in the right coast of Mosul,” 4/16/17

UN Office for the Coordination of Humanitarian Affairs, “Nearly half a million civilians have fled Mosul since fighting began six months ago; hundreds of thousands more may flee in the weeks to come,” 4/17/17

The Islamic State’s annual Ramadan offensive in Iraq continued into the first week of May. Pro-Iran groups were active as well. That led to ...