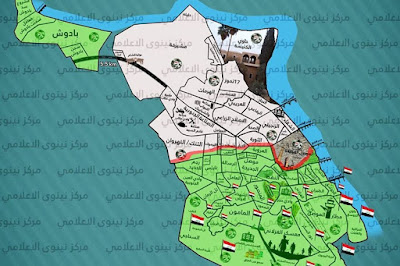 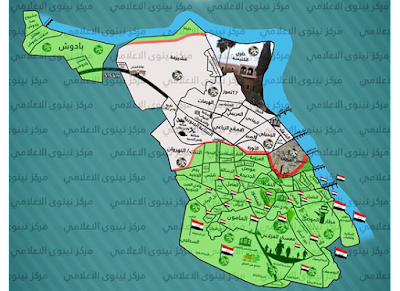 Map comparing WMosul April 4 (top) to April 14, 2017 (bottom). The police have made no movement for a month in the Old City (grey area) to the right. The Golden Division on the other hand has moved up into the center of the city. The 9th Division and Hashd also just took the towns leading to the entrance to Mosul from the northwest. Green = liberated, white = IS controlled, blue = Tigris river (Ninewa Media Center) 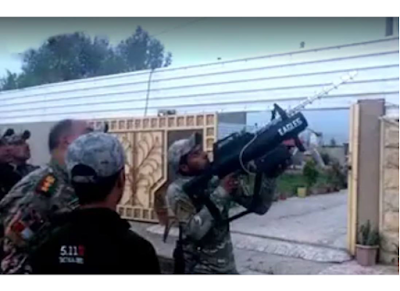 
Despite news that the police have returned to the fight in the Old City district of west Mosul, they appear to still be taking only baby steps. According to the head of the Federal Police General Raed Jawadat his forces destroyed an Islamic State command center in the district, and made a thrust towards the Grand Mosque. The militants on the other hand counterattacked in the same area. When the police reached the Old City they were immediately held up by the tough IS defenses and the dense layout. They then shifted to a holding force to occupy the insurgents, while the Golden Division moved up the flank of the district. The police recently announced they had returned to the offensive, but there has yet to be any real difference in the pace of operations not any advances announced.

Michael Knights and Alex Mello wrote an excellent piece analyzing the tactics the Islamic State has employed in Mosul. The insurgents have changed their fighting style from previous urban battles such as Fallujah. There IS set up extensive IED fields, hard points, and deployed snipers and car bombs on the perimeter. Once those lines were broken the group’s defenses quickly collapsed. In Ninewa, the militants reversed that strategy. Some outlying towns to the city were fortified to slow the advance of the Iraqi joint forces, but IS was saving most of its men and material for Mosul itself. It successfully predicted the main routes the Iraqi forces (ISF) would take into the city and set up two defensive lines, one on the east and one in the southwest to counter them. Instead of the IED fields that it had used previously, IS deployed small teams of men with machine guns and RPGs that would fire and maneuver, and constantly move from position to position, and re-infiltrate areas under government control. These were supported by car bombs, which were constantly adapted to the changing environment and ISF responses. For instance, the vehicle bombs were at one point painted like the surrounding buildings to blend in with the environment. They were then made to look like regular vehicle even though they were armored to try to prevent their destruction by small arms fire. Finally, the group has constantly threatened liberated areas with raids, car bombs, drones, and mortar fire. Despite IS’s evolution, it is still losing to the ISF. Attrition is reducing its fighters and elite units such as the Golden Division have proven effective fighting them.

Agence France Presse ran a story on football returning to Mosul. Under IS rule people could still play the game, but under strict rules. Now the provincial Sports Department is trying to repair fields so players can enjoy the sport freely. This is another sign of the determination of the residents of Mosul to rebuild their lives. The government is still barely present within the city, but even little acts like these are important to get things back to normal.

Speaking of rebuilding, ten families returned to Qaraqosh to the east of Mosul. Shops are re-opening and people are trying to clean up the churches, which were destroyed by the Islamic State. Some of the returnees were worried about the Shiite slogans spray painted in the town, and the Shiite flags that have been put up. They were afraid that could lead to sectarian tensions. Most of Qaraqosh was Christian, and that community was devastated by the Islamic State. They are now weary of anything that could lead to future violence.

Displacement patterns are changing in Ninewa. Many displaced (IDPs) rather than going to camps have chosen to relocate to east Mosul. There they are renting, staying with relatives or squatting in abandoned buildings there. There is a constant flow of people back into the city as well with approximately 11,000 returns during the second week of April. There are three motivations for the change. One is people do not want to submit to the restrictions within the displacement camps such as the inability to leave. Second, almost all the camps are full or just at capacity. Finally, IDPs want to be near their homes so they can go back to them as soon as possible.

New Sabah, “The destruction of a security building and head of camps in West Mosul,” 4/14/17