The on going Battle for Mosul continued to drive violence across Iraq in April 2017. In the rest of the country attacks have been going steadily down for the last few months, especially in places like Baghdad, which has seen the fewest incidents and casualties in years.

Those incidents led to a total of 848 deaths consisting of 3 Sahwa, 6 Peshmerga, 13 Hashd al-Shaabi, 52 members of the Iraqi Security Forces (ISF), and 774 civilians. There were 427 injured made up of 1 Sahwa, 7 Peshmerga, 28 ISF, and 391 Civilians. Ninewa was the deadliest province with 739. After that fatalities were very low with 42 in Salahaddin, 21 in Anbar, 19 in Baghdad, 16 in Diyala, 7 in Kirkuk, 3 in Babil, and 1 in Basra. Baghdad for example used to regularly average triple digit deaths last year, but now is witnessing some of the lowest figures since the 2003 invasion.

In Anbar there were 9 incidents, 21 dead, and 5 wounded. That was highlighted by a suicide car bomb that hit the Iraqi forces in Fallujah, and a car bomb that was destroyed, another was that was discovered and dismantled, and five suicide bombers that were killed. Anbar officials and security forces were relieved that most of these were unsuccessful, but at the same time are increasingly concerned that they continue to plague the province. The number of incidents in Anbar has been on a steady decline since the summer of 2016 when there was an average of 4.1 per day versus just 1 per day in February and March, yet the attempts at mass casualty bombings remain high. 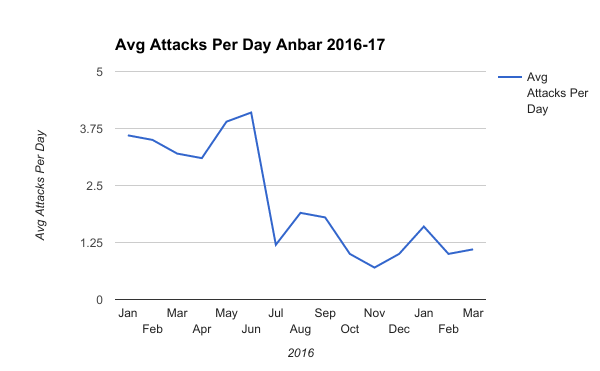 The number of incidents remained low in Babil, but there was suddenly a spate of large bombings during the first week of April. A suicide bomber and a car bomb hit the city of Iskandiriya during the middle of the week. The last time there was a similar type of attack was back in November 2016. Babil is the only governorate in Iraq where there used to be a sizeable Islamic State presence that was expelled, and never returned. It’s unclear whether these bombings marked some type of comeback for the group or were just sent from neighboring Anbar or southern Baghdad to sow chaos.

Baghdad is witnessing the lowest violence seen in years. There were just 32 incidents leading to 19 deaths and 80 wounded. In March and April 2017 there were an average of 4 incidents per day compared to 10 in August and September 2016. Incidents have been going down ever since the Mosul campaign started in October of last year. While IS still has cells operating in the southern and northern towns outside the capital itself, it looks like they pulled back some of their forces to defend Mosul since there were no large security operations in Baghdad to account for the decline. 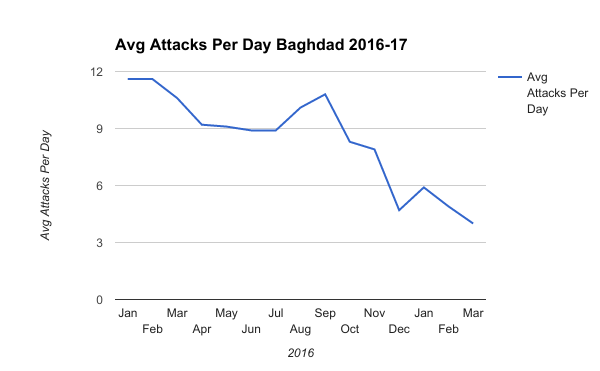 In February there were growing concerns about increasing violence in Basra. That has now subsided. There are still a few incidents per week, but they have gone back down to their average. At the start of April for instance, there were just 3 incidents, with a teacher being shot and killed.

Diyala, Kirkuk and Salahaddin are where the insurgents either maintain territory or are rebuilding. Usually there are just a few incidents in the three governorates, but attempts at mass casualty bombings. That was seen in Kirkuk and Salahaddin. In the former there were 7 incidents, 7 deaths, and 1 injured. In Salahaddin there were 9 incidents, but 42 killed and 57 injured. The large number of casualties was due to five suicide bombers infiltrating the downtown area, probably to mark the anniversary of the liberation of the city in 2015. They left 35 dead and 42 wounded. In Diyala however, attacks have been picking up. There were 17 incidents leaving 16 dead and 21 injured. Since August 2016 there has only been an average of 1 incident per day so this was a doubling of violence. Still, while there were three clashes with the Islamic State, most of the other events were IEDs or drive by shootings.

The Battle for Mosul entered its sixth month. There were 88 incidents in Ninewa leaving 739 fatalities and 257 wounded. The vast majority of those, 705 killed and 253 injured, were civilians who have taken the brunt of the fighting. As the Islamic State has lost ground in the city it has killed more and more people who have attempted to flee or to intimidate people from trying. The group was blamed for 188 executions during the week. Many times these people were hung on electricity polls or dumped in streets to intimidate the population. Iraqi and Coalition air strikes and shelling also took their toll with 275 deaths and 162 wounded. The Iraqis and Coalition have increased their use of these heavy munitions in the fighting in west Mosul, and this has been the result.

Al Aaalem, "Video: Fierce battles on the right bank of Mosul and a bomb explosion against the security forces yesterday," 4/3/17

Face Iraq, "Security sources: the bombing of 5 electricity towards in the northeast of Diyala province," 4/2/17
- "Two people were killed and three others injured in a suicide bombing in Iskandiriya," 4/3/17

Hathalyourn, "The height of the clashes in the center of Tikrit left 15 dead and 20 wounded, including an officer and his son," 4/4/17

Al Maalomah, "A civilian was killed and three wounded by a bomb explosion in Abu Ghraib," 4/2/17
- "The death of three people from one family in bombing by international coalition in Mosul," 4/6/17
- "Gunmen steal 30 million dinars from a central bank office in Kirkuk," 4/2/17
- "One person was killed and two wounded by an explosive device southwest Baghdad," 4/4/17
- "The popular crowd foiled an attack on the Makhoul Mountains," 4/6/17
- "Three suicide bombers, including a car bomb, were killed in security sweeps west Anbar," 4/4/17
- "Three suicide bombers killed while trying to attack military units east of Fallujah," 4/7/17
- "Three suicide bombers were killed in central Tikrit," 4/4/17

NINA, "21 people form 3 families who tried to escape from the western side towards the Tigris River were executed," 4/2/17
- "The body of an unidentified man was found northeast of Baquba,' 4/2/17
- "A Civilian killed by unknown gunmen in Muqdadiya, in Diyala," 4/2/17
- "Daesh executed One of the three kidnapped men northeast of Baquba," 4/7/17
- "IED Kills And Wounds 12 Construction Workers West Of Baghdad," 4/5/17
- "Popular Mobilization Forces Foil An Attack To Daesh West Of Mosul," 4/4/17
- "Security Forces Foil An Attack To Daesh West Of Diyala Province," 4/5/17
- "Security Forces Kill 5 Suicide Bombers North Of Mosul," 4/1/17
- "Six people killed and three bodies found in Kirkuk," 4/7/17
- "Three civilians were wounded by mortar shells on a village northeast of Baquba,' 4/7/17
- "Three policemen injured in a bomb explosion while trying to dismantle it in Jurf Al-Sakhar in Babylon," 4/3/17

Shafaaq News, "After 15 minutes…freed kidnapped and arrested his captors in Baghdad," 4/5/17
- "The assassination of the son of a security official in Baquba," 4/5/17
- "The corpses of 22 civilians arrive at al-Qayara hospital," 4/3/17
- "Daash kills a man and his son as they try to flee west Mosul," 4/2/17
- "Eight people were killed and wounded, including children, in a house in Mosul," 4/6/17
- "Explosion of a car bomb under control near Zarzur Anbar," 4/7/17
- "Five people, including a security officer, a tribal leader and his wife were killed in separate incidents in Mosul," 4/2/17
- "A preacher killed 36 people, including women who tried to escape West Mosul and threw their bodies on the roads," 4/4/17
- "The release of kidnapped and the arrest of the kidnappers and a gang dealing drugs and counterfeit currency in Baghdad," 4/4/17
- "Two children were killed by Daash shelling, southwest Mosul," 4/1/17
- "What happened in Tikrit? 71 people were killed and wounded," 4/5/17
- "Worshipers injured by shelling targeting liberated Mosul," 4/7/17

Al Sumaria, "85 million dinars stolen from a house in an armed robbery north Baghdad," 4/7/17
- "Baghdad operations freed abductee and arrested the kidnappers in Rusafa," 4/1/17
- "The body of a man was found stabbed by a knife north Baghdad," 4/2/17
- "The body of an unidentified man found south Kirkuk," 4/2/17
- "A civilian was killed and five others wounded by a bomb explosion west Baghdad," 4/7/17
- "A civilian was wounded by a roadside bomb explosion northwest Kirkuk," 4/2/17
- "A civilian wounded with stun guns southeast Baghdad," 4/1/17
- "Daash executes three civilians on charges of communicating with security forces southwest Kirkuk," 4/5/17
- "Five mortar shells landed in the vicinity of a residential complex in Hamrin," 4/7/17
- "Four civilians were executed in Anbar, a local official said," 4/7/17
- "Four civilians wounded by a roadside bomb north Baghdad," 4/4/17
- "Interior Ministry: Martyrdom of a security member embracing a suicide bomber who tried to target a funeral north Babylon," 4/3/17
- "Interior Ministry: Security forces blew up two suicide bombers," 4/4/17
- "The killing of a generator owner in an armed attack in western Baghdad," 4/1/17
- "One person was injured by a roadside bomb explosion southeast Baghdad," 4/6/17
- "A policeman was killed in an armed attack in central Tikrit and the police clashes with the attackers," 4/4/17
- "Salah al-Din tells the details of what happened today and confirms the killing of six suicide bombers and a seventh blew himself up," 4/6/17
- "Security source: gunmen steal about 50 kg of gold from traders north Kirkuk," 4/7/17
- "Seven Peshmerga injured in explosion west of Tuz Kharmato," 4/2/17
- "Three civilians, including two brothers, were kidnapped north-east of Baquba," 4/6/17
- "Three people were injured by an explosive device east Baghdad," 4/5/17
- "Three people were killed and wounded by an explosive device north Baghdad," 4/6/17
- "Two people were injured in explosion near a liquor store west Baghdad," 4/2/17
- "Two people wounded by an explosive device south Baghdad," 4/1/17

This Day In Iraqi History - Jun 19