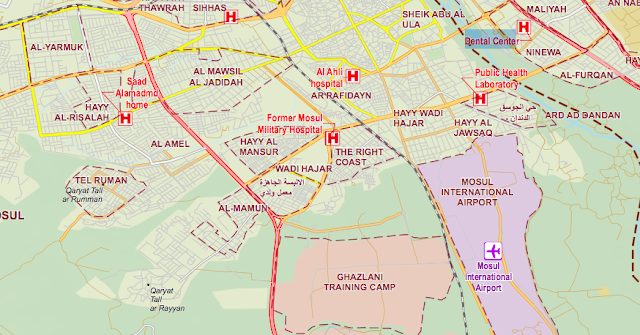 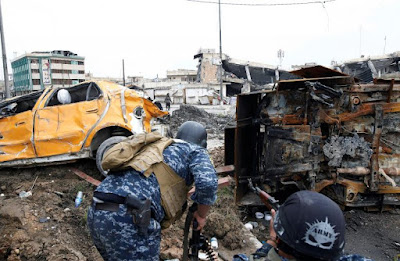 For the first time the Islamic State was able to seize some territory from the Iraqi forces (ISF) inside Mosul. The insurgents took the Rajim al-Hadid neighborhood that was just freed on March 22. The area was being held by a tribal Hashd unit probably made up of locals. The Golden Division was still fighting in Yarmouk as well away and to the west of the Old City. A member of the Ninewa security committee said that there have been no real advances by the police for the last 15 days in the Old City. That stalemate has led to a revision of the battle plan. While the police hold down Islamic State fighters in the Old City, the Golden Division is moving up the flank to surround the district, while taking areas in the western section of the city.


In a rare announcement the Federal Police commander General Raed Shakir Jawadat stated that he’d lost 325 officers in the fighting in west Mosul. An American general testified to Congress a few days before that there had been 490 ISF fatalities in the battle for the western half of the city. That was immediately denied by the Iraqis. The stance of the ISF and government has been to not report casualties and deny any reports that have large numbers so this was a decided change in policy.

The Los Angeles Times talked with survivors of the Jadida incident. As reported on the first day the story emerged people told the Times that two buildings came down in the bombing. The owner of one of the houses had been allowing people to shelter inside to escape the fighting. Two structures collapsing would help explain the high casualty figures.

The Jadida bombing has led the U.S. led Coalition to change its procedures. Colonel Joseph Scrocca was quoted in the New York Times that IS is herding people into buildings and baiting them to be attacked by the Coalition to discredit the alliance. That has led to the Coalition to rethink its targeting. What the revisions were was not divulged to the press.

Time magazine spoke with people who were used as human shields by the Islamic State. One family was moved from place to place inside Mosul for 9 days before they were able to escape. Many of these civilians became victims of air strikes. Amnesty International’s Donatella Rovera interviewed some of them. The Islamic State changed its tactics during the battle for west Mosul. At first, insurgents were using human shields just to cover their retreat. When they were setting up fighting positions in buildings they would kick people out so they would not get in their way. When the fighting started however, they began to not only keep people inside the houses, but are now forcing groups into them so that they will not be hit by the Iraqis or Coalition. Unfortunately there is no way to tell what buildings have civilians and which do not when calling in air strikes or artillery, which is leading to a sharp rise in casualties.

Canada’s Defense Ministry announced that its Special Forces were now involved in Mosul. There are around 200 Canadian special operatives in Iraq right now. Before they stayed out of the city, but now they are in both the east and west sides. They join American and French Special Forces that have been working in Mosul from the start. Other Coalition members such as the British may be involved as well.

Responsibility for securing east Mosul continues to change. First, Police General Wathiq al-Hamdani said that 5 police directorates and 14 stations were opening. There was also a combat regiment from the emergency police to help with security. The police were supposed to be given the primary role in the east, but that has not happened yet. Second, the joint command headquarters that was just opened on March 23 was closed. The HQ was supposed to coordinate the security forces and intelligence agencies, but the government claimed that was no longer necessary. Instead the Ninewa Operations Command is now in charge. East Mosul is being policed by a number of groups ranging from the police to the army to the Hashd to local security groups, and the National Security Service. All of these organizations operate independently and often in competition with each other. This has led to several confrontations. The joint operations command was supposed to bring order to this hodgepodge of groups, but didn’t last long enough to have an impact. That job is now left to the Ninewa Operations. That obviously has more organizational know how, but is also still involved with the on going military campaign as well, which may stretch its resources.

The Associated Press went to a private hospital in Qayara that is being overwhelmed by casualties from Mosul. There are only two hospitals south of the city. There are also trauma centers inside Mosul and facilities in Irbil that are all taking in people. The Qayara hospital said it had treated 600 battle casualties since January 2017. It complained that the government was not providing any help. All of these facilities are running into the same problems. They don’t have space or supplies to handle the wounded.

There were three new stories on the displaced. Agence France Presse talked with people who are moving within Mosul. They are migrating from one neighborhood to another to avoid the fighting and then returning as soon as they can. This happened in the west as well. They are usually motivated by wanting to protect their property, so do not want to move far away. The Los Angeles Times interviewed squatters in Hamam al-Alil. There are displaced camps in the town, but they are overfilled. That has led people to set up tents and take over abandoned buildings in the area. Again, many of these displaced want to get back into Mosul as soon as possible and are willing to stay out in the elements as a result. Finally another AFP reporter was told about the trauma displaced children suffered from. Some were being more aggressive, some run when they see adults, others hit other children. There is no real treatment available for them, and is another reminder of the deep scars this battle is leaving with the population.

AIN, “What are the obstacles hindering the troops’ progress in the Old City in Mosul?” 4/1/17

Buratha News, "A civilian was killed and five others were injured when a rocket landed near a mosque northeast Mosul," 3/31/17

Chulov, Martin, “Mosul families trapped on the frontline of the war against Isis: ‘What can we do?’” Guardian, 10/31/17

Al Mada, “Inertia reigns in the process of liberated the right bank of Mosul despite 60% of the area being freed,” 3/31/17

New Sabah, "Daash destroys families on the right bank of Mosul and rained mortars on the left bank," 4/1/17

Waradana, “Abadi closes the main security headquarters in the city of Mosul,” 4/1/17