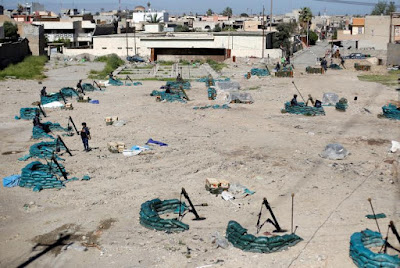 The Joint Operations Command announced that only 30% of west Mosul remained under Islamic State control. Based upon daily reports and maps available that sounded roughly correct. In the last several weeks the Golden Division has seized much of the center of west Mosul greatly expanding the government’s control of the city.


Several hundred people have died in the fighting to secure that area. London’s Al-Quds Arabi cited sources that 100 civilians had been killed in the Old City and 90 in Thawra that was just freed in the last week. On April 24 an IS drone strike, sniper fire, and executions left another 98 dead and 5 injured. By far, the vast majority of the casualties in the battle for Mosul have been civilians, and far more have lost their lives in west Mosul compared to the east due to the layout, the Islamic State using human shields, firing upon liberated areas, and executions, along with Iraqi and Coalition air strikes, artillery, and mortars.

IS attacked the Tal Afar district again, and the Hashd claimed one of their bases in the area was hit by chlorine filled shells. On the other hand, Asaib Ahl Al-Haq’s Jawad Talabawi told the press that because the government has blocked their assault upon Tal Afar itself, they would be heading towards the Syrian border to clear that area of militants. Because Tal Afar will not be freed until after Mosul the Hashd have been sitting in the area for months now, getting more and more frustrated. Going towards the border therefore would be a good use of their forces.

A Kurdistan Democratic Party (KDP) official claimed that the Hashd had opened 34 offices in Mosul and the surrounding towns. Right after west Mosul was liberated a Shabak Hashd unit was brought in to help secure the area. Since then several Hashd groups have entered the city. The KDP member was afraid this would raise tensions in the province, but nothing has really been said about this presence so far.

The United Nations was the latest group to note that more people were departing displaced (IDP) camps than entering them. From April 19-20 for instance, 801 people arrived at camps, but 1,452 left. Most went to east Mosul. The IDP camps are either full or at capacity right now anyway leading people to set up tents or squat in areas or go to east Mosul or Baghdad for housing. Many have disliked living in the camps, so when the opportunity has presented itself to move elsewhere they have done so.

A U.N. team visited three neighborhoods in east Mosul. It found people moving about, and markets open. Those living near the Tigris River were still afraid of shelling and sniper fire by the Islamic State. There was still no services available, few jobs, little aid coming in, and many had no government IDs having lost them under IS rule. From reports people in the city are feeling a mix of happiness, frustration and resilience. They are glad to be free of the Islamic State. They are mad that the government isn’t doing more to rebuild the city. Yet they are not letting that stop them from going about their business and trying to start their lives again.

As an example of that resilience, the head of Mosul University reported that 30% of the campus was damaged. Some parts like the medical school, the central library, and the president’s office were completely destroyed, but most of the school appeared to be still standing. The president wants the college to be repaired as quickly as possible and for classes to re-open. Mosul University used to be one of the top schools in the country, and its head would like to rebuild that reputation.

Al Maalomah, “Popular Crowd Leader: Abadi put red lines in front of our participation in the liberation of Tal Afar so we will go to the border,” 4/24/17

Shafaaq News, “Joint operations: 30% of West Mosul is left,” 4/24/17
- "Targeting the headquarters of the popular crowd with rockets believed to be carrying toxic gases," 4/24/17

Al Sumaria, “President of the University of Mosul talks about the percentage of damage suffered by the university,” 4/24/17