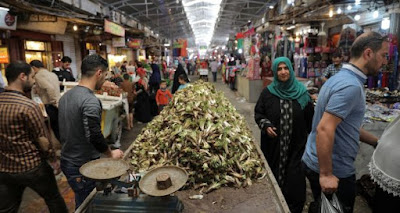 There were clashes in west Mosul, and the Hashd were advancing towards the Syrian border. The Golden Division was fighting in Zinjali, and the Federal Police were battling in Rifai, Harmat, and the Wadi Akab cemetery, both in the eastern section of the city. The Hashd on the other hand captured four towns, including the historical Hatra, west of Mosul. Hatra is listed as a UNESCO world heritage site, and the Islamic State destroyed part of it after it was captured in 2014. In 2015 the group released a video of it smashing walls, shooting statues, and destroying other structures. That was for propaganda purposes however, as the main goal of IS was not to wreck the place, but rather to loot it and sell the antiquities to help raise funds. The police and Golden Division are attempting to link up in the Old City district, while the Hashd are pushing towards the Syrian border, because the government will not let it take Tal Afar.


In Hamam al-Alil south of Mosul a suicide bomber was killed. On April 23 a group of Islamic State fighters including suicide bombers infiltrated a Federal Police base in Arij in the Hamam al-Alil district. The insurgents are attempting to counter attack outside of Mosul, but so far they have not been that effective.

The New York Times followed a unit from the Golden Division into west Mosul. It went to Tanak before it was freed. The article covered the intense street fighting. General Abdul Wahab Saadi told the Times that if the city had been emptied of civilians the battle would have been over a long time ago. That didn’t happened because the government could not have supported the population. At the same time, the article highlighted the different facets of life in Mosul. On the one hand there was a street battle going on, but a few blocks away there were shops open. There were also people boarding buses to leave the city for displaced camps.

Reuters, the Irish Times, and the United Nations all wrote about how Mosul is trying to rebuild. Reuters talked with businessmen who were trying to start over. Several entrepreneurs were pooling their money to rebuild a building so that they could re-open their shops. One of them said it was up to the people to revive the city. The Irish Times went to a market in Nabi Younis in east Mosul. People were shopping and the businesses were reviving. One man talked about all the things he could sell now that were not allowed under the Islamic State. Finally, the United Nations noted that 28 neighborhoods in the east now have access to clean drinking water. This is the first restoration of services. All of these highlight the resilience of the residents of Mosul. As soon as areas were freed in the city people went about putting their lives back together. That doesn’t mean there isn’t a huge amount of work ahead, but the city is moving forward.

The U.N.’s Iraq Assessment Working Group issued a report on the difficulties Mosul is still facing. The U.N. team conducted a survey in 45 neighborhoods, 38 in the east, and 7 in the west from the end of March to the start of April 2017. 43 of 45 neighborhoods said there were problems accessing food. In just over a third of those areas, half to three quarters of the people hadn’t gotten sufficient food in the last week. The main problems were getting to markets, no money, a lack of cooking fuel, and the disruption of farming production. Most people are relying upon gifts, charity, and loans to get their food. 95% of people in east Mosul were buying on credit. 74% received food as gifts from friends of family. 5 of 7 neighborhoods in west Mosul relied upon the U.N. or aid groups for their food, and 3 of 7 of them said local charities and the community were providers. That compared to only 3 of 36 neighborhoods of east Mosul that relied on the U.N. or aid groups for food. Still, despite these issues in 38 of 45 neighborhoods residents were eating an average of two meals per day. In 97% of east Mosul and 100% of west Mosul neighborhoods 75% or more of the population had not earned a salary in the last month. 96% of neighborhoods said they were borrowing money. 82% were getting loans from friends and family, and 80% were spending their savings. The lack of services meant that 44 of 45 neighborhoods lacked safe drinking water. Most were using wells and untreated water. Water was just restored to sections of the east after the report was issued. 29 of 45 neighborhoods had their kids going to school. 30 of 45 neighborhoods said their schools were damaged. In west Mosul however, less than 25% of the children were attending. 89% of the neighborhoods stated they were facing challenges to getting an education. That included not enough schools or classrooms, teachers not being paid, and a lack of supplies. While hundreds of thousands of people have left the city there were others who were displaced within Mosul. 97% of the neighborhoods in east Mosul and 4 out of 7 in the west said there were displaced people present. There were also a large number of people returning. 82% of east Mosul and 71% of west Mosul had people going back to the city. Almost all the displaced were from the west, although there were some from neighboring districts. The majority of them were renting a place to stay. Some of these problems are bigger than others. The lack of jobs was the most important. While the economy is reviving with the shops and markets, this is all being financed by credit. The government is the largest employer, and has tried to get its workers back into the city, but the lack of pay and insecurity has held that up. The government is also putting its employees through a screening process before they can get paid, and it appears that process is taking a very long time. The economy cannot really revive until there are jobs available and people are getting their wages. Others like water are slowly being restored finally.

Another Kurdish official complained about the Hashd setting up shop in Mosul. A Kurdish parliamentarian claimed that the Hashd had taken over a number of buildings belonging to Kurdish parties. They were told to hand over the property. Two days before a member of the Kurdistan Democratic Party claimed that Hashd groups had set up 34 offices in the city and surrounding towns. Both claimed this was causing concerns and tensions with the locals. So far the Kurds are the only ones talking about this in the press.

Reuters was the latest to write about the screening process going on with the displaced. All the people leaving Mosul are directed to Hamam al-Alil. There, all the men are separated and screened by the security forces. Most of the time that process only lasts around 2 hours. Up to 30 people are arrested per day according to General Bassam Hussein Ali head of security for the displaced. Human Rights Watch estimated that a total of 1,200 had been arrested so far, and 700 sent to Baghdad for trial. There are concerns that part of this process is being shaped by secret informers and people with grudges. It doesn’t appear that is having much affect however as over 300,000 people have gone through Hamam al-Alil and only 0.004% have been detained.

Gordon, Michael, “On the Mosul Front, a Brutal Battle Against ISIS and Time,” New York Times, 4/26/17

Laessing, Ulf, “For some Mosul men, escape leads straight to the interrogator,” Reuters, 4/26/17

Shafaaq news, “URGENT: Violent clashes with the Counter Terrorism Forces in central Mosul and the intervention of US F16s,” 4/26/17