Review Curveball, Spies, Lies, And The Con Man Who Caused A War 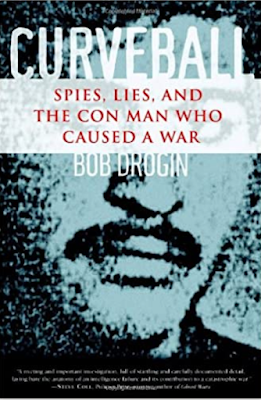 Author Bob Drogin believes that the story of Curveball a defector who claimed that Saddam Hussein had mobile weapons of mass destruction (WMD) labs showed the ultimate failure of U.S. intelligence on Iraq. He writes that American agencies weren’t conned by the Iraqi, but that they conned themselves. They took a single source whose story was never verified and made it the centerpiece of the Bush administration’s argument that Iraq was producing WMD. Curveball, Spies, Lies, And The Con Man Who Caused A War is a striking example of incompetence that helped lead to the invasion of Iraq.

Many other books have dealt with Curveball and the mobile WMD labs story but this is the most thorough account. Drogin breaks up the story into three sections. The first is when Curveball appeared in Germany in 1999 seeking asylum. He told the German intelligence that he was a supervisor for a secret program to build mobile WMD labs. There were problems with his account and his claims were never verified but the Germans were impressed by the details he gave. They wrote dozens of reports about him which they sent off to the Americans. That is the second part, which covers how Curveball became the centerpiece of the CIA’s claims that Iraq was producing WMD. Analysts latched onto Curveball and enhanced his story saying it was supported by three other defectors. Last, the book shifts to Iraq and how the U.N. inspectors and the Americans after the invasion discovered the labs never existed.

One of Drogin’s strongest points was that the CIA clung to Curveball even after his story was proven false. They took a single source that was never proven and turned it into the linchpin of their entire assessment. They would add to it and embellish it, and then refuse to let it go of it. This led to one of the greatest intelligence failures in U.S. history. The CIA wasn’t lying as many anti-war opponents claimed. They were so attached to the belief that Iraq had WMD they fooled themselves.

Drogin goes more in depth into the story than that. He also discovered the origins of Curveball’s claims. In 2003 U.N. inspectors went to a small town where Curveball claimed he worked on a mobile lab. An Iraqi told them that the Mesopotamia State Company for Seeds imported 11 shipping containers full of German machines for seed processing in 1997. They went to warehouses in 6 different locations. Curveball worked for the company and used the containers as the basis for his WMD claims. The warehouses were turned into docking bays for the labs. When he arrived in Germany he used the Internet to go through the inspectors’ reports and found details to add to his story. After the invasion the CIA interviewed Curveball for the first time and he said all he wanted was to get asylum in Germany and get his family out of Iraq and he had accomplished both with his story.

Curveball is one of the best books to read about U.S. intelligence on Iraq. That’s because it not only explains how the CIA and others failed but more importantly why.