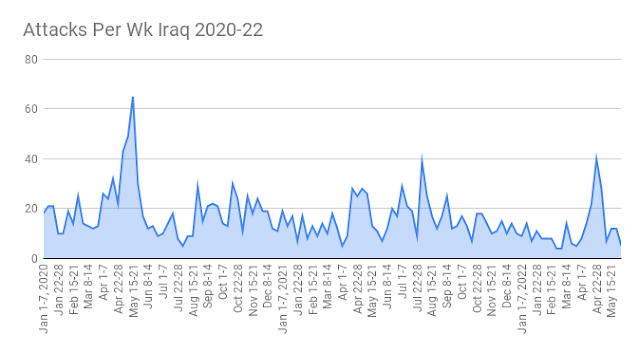 Violence plummeted in Iraq during the first week of June. Both the Islamic State and pro-Iran groups were barely active.

There were a total of 6 security incidents reported in Iraq from Jun 1-7. That was down from 13 the fourth week of May, 18 the week before that, 9 the second week and 31 the first week of the month. The cause was the Islamic State ended its Ramadan offensive and groups aligned with Tehran have wound down their operations for now. 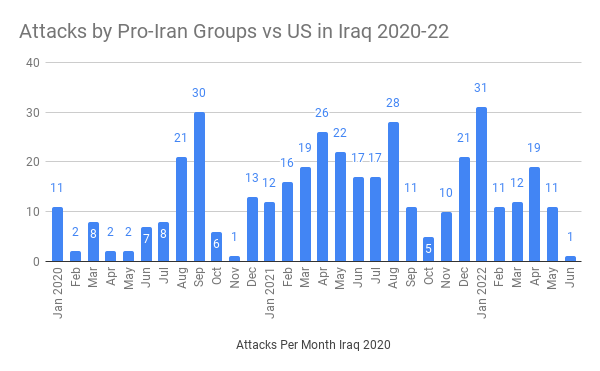 There were two incidents by pro-Iran groups. First, drones were shot down over a Turkish base in Ninewa. This base is targeted nearly every month now as some Hashd factions oppose the Turkish occupation of areas of Kurdistan. They have been there since the 1990s to fight the Kurdistan Workers’ Party (PKK). A convoy working for the U.S. was hit by an IED in Salahaddin as well. Usually attacks on trucks are the main target of these groups. Those operations are easy to plan and carry out and rarely lead to casualties. Last month however there were just as many rocket and drone operations as IEDs. This opens up more targets over a wider territory such as hitting areas in Kurdistan where these groups have no physical presence. 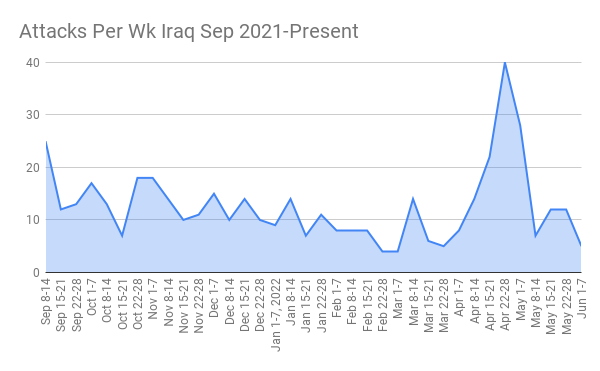 That left just 4 incidents by the Islamic State from June 1-7. That compared to 12 from May 22-28, 12 from May 15-21, 7 from May 8-14 and 28 from May 1-7. At the start of April IS launched its Ramadan offensive which led to a spike in attacks. That has now ended and incidents have dropped as a result. In the 21 weeks since the start of the year 12 have seen single digit incidents.

During the week there were attacks in Baghdad (1), Diyala (2), and Ninewa (1). They led to 8 wounded made up of 2 Iraqi Security Forces and 6 civilians. 7 of those happened in Diyala and 1 was in Ninewa.

In Baghdad an infiltration attempt in the northern district of Tarmiya was foiled. In Diyala a family was attacked and there was another attempt to sneak into an area. Finally, an IED went off in western Ninewa. None of the incidents were offensive in nature. The assault in Diyala for instance could have been aimed at forcing the family out or involved taxes. Such incidents are meant to enforce IS control over areas and is one of the most common activities the group is involved in currently. All 4 were in rural areas of Iraq. This is the state of the insurgency today. It is largely inactive and only operates in areas where there are few people.

NINA, "7 People From one Family Injured In An IED Explosion Northeast of Baquba," 6/4/22

- "A child was injured in an explosive device explosion west of Mosul," 6/8/22

Shafaq News, "An explosion targets a convoy of logistical support for the International Coalition in Salahaddin Governorate," 6/5/22

- "Seven wounded, including two policemen, in an explosion in Diyala," 6/5/22