Review The Scourging Of Iraq, Sanctions, Law And Natural Justice 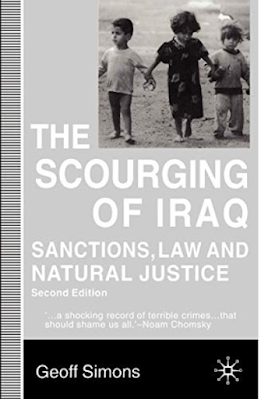 The Scourging Of Iraq, Sanctions, Law And Natural Justice has some detailed information about the devastating impact United Nations Sanctions had upon Iraq. Unfortunately, the start is so bad you don’t want to read that far into the book. That’s because author Geoff Simons’ beginning is an anti-American rant where everything from the invasion of Kuwait onward is blamed upon the United States.

The first section of Simons’ book is a badly written diatribe against the U.S. based upon conspiracy theories. He begins by claiming that the Bush administration tricked Iraq into invading Kuwait in 1990 and that diplomacy could have gotten Saddam Hussein to withdraw and therefore war was unnecessary. He then makes all kinds of ridiculous statements about the war like the Americans bombed ancient historical sites to encourage looting. His summary of the post-Gulf War era is no better. For instance, he constantly writes that Iraq was cooperating with U.N. weapons inspectors and then admits that it wasn’t. Then that the U.S. unfairly used this to maintain sanctions because Baghdad actually was complying until he gives another example that it wasn’t. His basic argument was that everything that went wrong for Iraq was all Washington’s fault and that it was to blame not Saddam. His rant never ends as he throws in one hairbrained scheme after another. You don’t want to take anything he writes seriously as a result, which undermines the rest of the book which is much better.

The middle of The Scourging of Iraq is about all the negative effects of the sanctions. There was the huge drop in health and education standards for the public. The middle class was destroyed, etc. He even has information on the U.N. sanctions committee which was never really discussed publicly because it did most of its work in secret. This committee blocked almost anything to Iraq whether it be paper or children’s clothing. That was because the U.S. and England used sanctions to contain Iraq and deprive it of the ability to rebuild after the Gulf War. If he’d stuck to that and made the argument that this was a violation of the United Nations’ charter he would’ve been much better off. Instead, he begins with all his various plots by the U.S. against Iraq.

A daring reader might want to skip the beginning and go right into Simons’ discussion of the sanctions and their impact on Iraq. On the other hand, there are other books on the embargo that are not full of conspiracy theories and half-witted arguments which would be a better use of time and money.