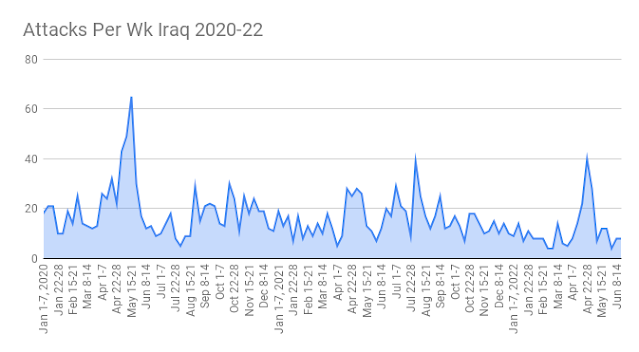 The security situation remained stable for another week in Iraq. There were roughly the same number of incidents from the second to third week of June and those were at a very low level.

There were a total of 10 security incidents reported in the media in Iraq from June 15-21. That compared to 12 incidents the week before and 6 the 1st week of the month. 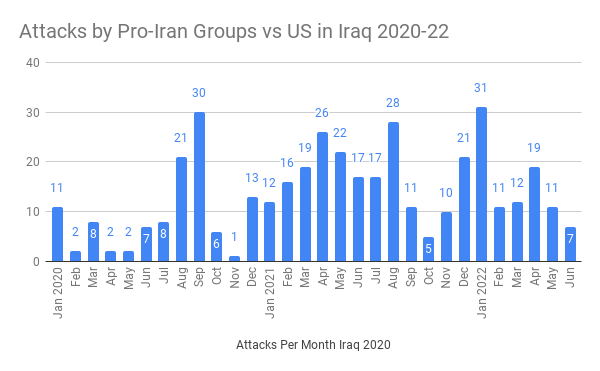 There were 2 attacks by pro-Iran groups. Rockets were fired at a Turkish base in Ninewa which has been targeted every month now and 2 IEDs went off at the gate of the Iraqi intelligence service in Baghdad. This came after Kataib Hezbollah claimed that the agency was involved in the deaths of Hashd leader Abu Muhandis and Iranian Quds Force commander General Qasim Suleimani. These accusations have been going on for some time and factions allied with Tehran have attacked intel personnel before.

There were 8 incidents by the Islamic State in Diyala (6) and Salahaddin (2). They resulted in 5 killed made up of 2 Iraqi Security Forces (ISF) and 3 civilians and 2 wounded ISF.

In Diyala there were three shootings, a body of a man was found after he was kidnapped, and an army patrol was hit by an IED. 5 of the 6 incidents took place in the Muqdadiya district in the center of the province which is one of the main bases of the insurgents in the country. The sixth was in the northeast along the Salahaddin border which has been under de facto control of IS for years.

A village was attacked in the Tuz Kharmato district of eastern Salahaddin and an IED was dismantled along the highway to Baghdad. The former was the only offensive operation by the militants during the week.

As usual all Islamic State activity was in rural and mountainous regions of Iraq. There were almost all defensive in action and none took place in a city. 14 of the 23 weeks since the start of 2022 have experienced single digits in security incidents another sign of how far IS has fallen from its heyday.

Buratha News, “Kataib Hezbollah: Pompeo confirmed our information that a director and members of the intelligence service were involved in the airport crime,” 6/19/22

NINA, "2 Soldiers Injured In An IED's Explosion Near The Border Between Diyala and Salah al-Din," 6/18/22