Review Empires of the Sand, The Struggle For Mastery In The Middle East 1789-1923

Karsh, Efraim and Karsh, Inari, Empires of the Sand, The Struggle For Mastery In The Middle East 1789-1923, Cambridge, London: Harvard University Press, 2003 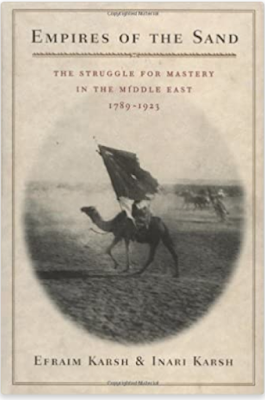 Empires of the Sand, The Struggle For Mastery In The Middle East 1789-1923 by Efraim and Inari Karsh attempts to dispel conventional wisdom about the creation of the modern Middle East. Many historians focus upon western imperialism as the main force during this period. The Karshes want to look at how local actors like the Ottomans, Sharif Hussein of the Hijaz and his son Faisal shaped events in conjunction with European powers. Their thesis is that the Middle East had a long history of cooperation and conflict with Europe which gave rise to the end of the Ottoman Empire and the emergence of the Arab states after World War I.

One popular argument is that European countries carved up the Ottoman Empire at the end of World War I for their own gain. Many point to the Sykes-Picot agreement which created British and French colonies and spheres of influence across much of the Middle East. The authors disagree with this view. For one, Sharif Hussein from modern day Saudi Arabia offered his services to both the British and the Ottomans to fight in World War I in return for an empire that would stretch from Arabia to Turkey. He made a deal with London which led to the famed Arab Revolt which T.E. Lawrence joined. Hussein’s demands were included in the Sykes-Picot agreement which included an independent Arab state for him. The Karshes argue that it wasn’t simply Europe breaking up the Turks’ territory, but Hussein played a role as well. It was an interaction between the two and not just an imperial land grab as is widely believed. Hussein was an imperialist himself not an Arab nationalist as he and his supporters portrayed him. His empire if he’d gotten it would have contained a number of different people from Arabs to Jews to Kurds to Turks and more.

Another common belief is that Iraq was arbitrarily created by England after the war. The authors write that it came about due to Hussein’s son Faisal, the French and the British. Originally London wanted to rule Iraq as a colony since officials thought the largely tribal society could not govern itself. Hussein’s son Faisal had been expelled from Syria by the French after he’d been named king and wanted another place to rule. He set his eyes upon Iraq, and relentlessly lobbied the British to make him the ruler of the new country. Paris opposed him, which helped his case since London was against France taking Syria after it had been won by the British during the war. Eventually England agreed to Faisal being king. Iraq therefore went from a colony to its own country with an Arab ruler thanks to Faisal, France and England. Again, the Karshes show that it was an interaction between different actors rather than just European powers determining the future of the country. Yes, Iraq would be a British mandate at first but it became the first Arab country to gain independence under that system in 1932 rather than going through a long colonial experience.

Empires of the Sand is a very good history of the end of the Ottoman Empire and what came afterward. It’s full of interesting stories and details and does a good job dispelling many common ideas about the Middle East. It goes into many other issues like how the Ottomans’ holdings were breaking apart before World War I leading to a series of wars, why the Turks joined World War I aligned with Germany, how Jordan was created and more. It makes a convincing argument that the Ottomans and Arabs like the Sharif Hussein his son Faisal and others shaped events not just European powers. Most of them were imperialists as well not just England, France, Russia and Germany. It’s a very useful book on how the modern Middle East came about and provides a different perspective to many other volumes that cover this period.