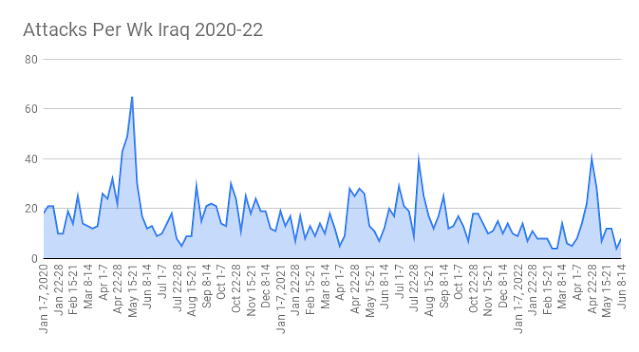 Security in Iraq remained largely the same from the first to second week of June. That meant very little activity by either the Islamic State or pro-Iran groups and few casualties.

There were a total of 12 security incidents reported in the media from June 8-14. That was double the number the week before. The increase was largely due to more attacks by groups aligned with Tehran. 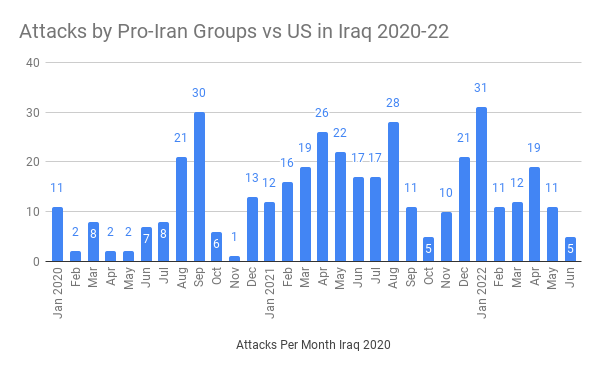 Those elements carried out 4 incidents. A convoy working for the U.S. was bombed in Salahaddin, A drone hit Irbil wounding three civilians, while rockets were fired at a Turkish army base and an oil company in Ninewa. In May pro-Iran groups changed their favored weapon from IEDs to rockets and drones. The latter allow a wider range of targets such as the military camp in Ninewa. The factions object to the Turkish presence in Kurdistan to fight the Kurdistan Workers’ Party (PKK) as a foreign occupation. The strike on Irbil was political violence as the Kurdistan Democratic Party (KDP) that runs the province is aligned with Moqtada al-Sadr and opposed to the Coordination Framework that includes many Hashd factions involved in these attacks. 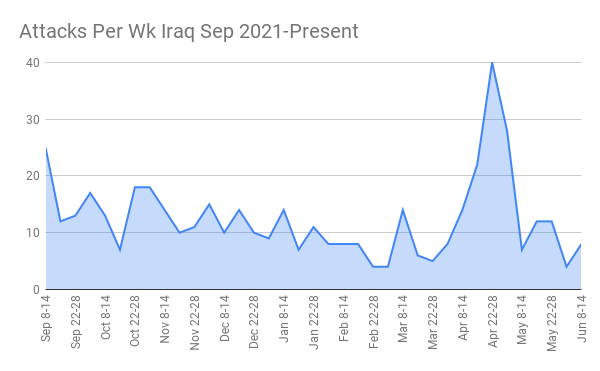 There were 8 incidents by the Islamic State. Those took place in Anbar (1), Diyala (3), Kirkuk (1), Ninewa (2) and Salahaddin (1). The week before there were 4 incidents. In the 22 weeks since the start of the year 13 have seen single digit attacks.

IS attacks left 1 dead and 6 wounded. That was made up of 1 civilian killed plus 3 ISF and 3 civilians who were injured. Anbar had 1 casualty along with 3 each in Diyala and Ninewa.

Since the start of the year IS incidents have remained relatively the same. The group is trying to maintain control of its remote areas, protect its smuggling routes, and preserve its cadres. There was an IED in Nukhaib, Anbar which is out in the western desert used for smuggling. In Diyala there was a foiled infiltration attempt and an IED and sniping at a checkpoint both in the Khanaqin district in the northeast. That is the center of IS’s activity in Iraq. A man was kidnapped in southern Kirkuk likely for ransom or to enforce taxes. An IED went off in Tal Afar area in western Ninewa and there was a shooting west of Mosul as well. Finally two IEDs were dismantled in the Samarra district in central Salahaddin. All of these were defensive in nature and none took place in a city.

This might be the lull before the next offensive which usually starts in July.

NINA, "The Anti-Armor In PMF Thwarts An Infiltration Attempt By ISIS in Diyala," 6/14/22

- "A civilian was wounded by unidentified gunmen in western Mosul," 6/14/22

- "The Popular Mobilization Thwarts A Terrorist Plot To Target Civilians South of Salahaddin," 6/11/22

Al Sumaria, "A soldier was injured in a bomb explosion in the Nukhaib desert," 6/12/22