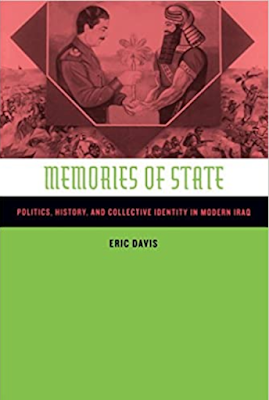 Memories of State, Politics, History, and Collective Identity In Modern Iraq is an academic look at how the Iraqi elite tried to forge a common history and political culture to bring the populace under its control. Author Professor Eric Davis argues that this effort was never successful for two reasons. First, the country was divided between nationalists and pan-Arabists for its first thirty years of its existence leading to constant instability. Eventually the pan-Arab Baath Party came to power but it quickly gave up those ideas for a cult of personality around Saddam Hussein which was rejected by wide swaths of the populace. Davis’ argument is convincing in some parts and has faults in others.

The author uses Antonio Gramsci’s theory of hegemony where a ruling elite attempts to integrate its ideals amongst the population to create a national identity and assure its rule. Hegemony is achieved when the elite’s ideas are widely accepted and seen as natural. The author argues that never happened in Iraq. Davis uses traditional history, ideologies promoted by the state and political parties along with the output of intellectuals to prove his thesis.

The first part of Memories of State deals with the conflict between pan-Arabists and nationalists during the early period of Iraqi history. Davis writes that the former were much more successful in creating a popular historical memory by playing upon a golden age of Arab rule under the Abbasid empire and claims that Iraq had always been the victim of foreign conspiracies that tried to undermine the unity of Iraq. This was promoted through the state’s organs such as the Directorate of Education that created a pan-Arab curriculum for Iraq’s schools. The nationalists on the other hand believed in a better future of social justice and democracy. The author argues it was harder for the nationalists to sell an idealistic future. They also didn’t promote Iraqi history but focused upon the West and USSR instead. Ultimately neither side was able to win over the populace and competed for power and often split leading to decades of conflict.

One problem with this section is that Davis believes that the pan-Arabists were more successful with their vision of the past then the nationalists with their future. If that was correct why was the Communist Party the largest in the country drawing in Arabs and Kurds while the pan-Arabists only appealed to a small number of mostly Sunni Arabs in the military and middle and upper classes? Perhaps he meant that the Pan-Arabists were more fervent about their ideas? This is a point that’s never quite explained.

The book is much more successful dealing with the Baath and Saddam Hussein. The Baath came into power a very small party who were afraid of their rivals the Communists and the Kurds. The conventional wisdom is that the Baath turned to repression to stay in power but Davis disagrees with that. It had to win over elements of society otherwise there would be constant resistance. The party went through three phases. First, it took a traditional pan-Arab stance glorifying the Abbasid Dynasty but also added ancient Mesopotamia to argue that Iraq was the greatest Arab country because of its long and rich history. It presented the Persian Shiites as traitors which meant that Iraqi Shiites could not be trusted unless they renounced their sect and saw themselves solely as Arabs. Second, when Iraq invaded Iran the state promoted Saddam as a modern Arab hero and said the war was like the ancient battle of Qadisiya where the Arabs defeated the Persians. This ran into problems as Iraq was thrown on the defensive and the war dragged on for years. How could it be another Qadisiya if Iraq wasn’t winning? Third, afterward Iraq focused upon a cult of personality with Saddam portrayed as a demi-god like figure who was the center of everything. This was contradicted by the Baath becoming a largely family affair full of corruption and vice such as Saddam’s son Uday famously kidnapping and raping women. While the first phase of Baathist ideas might have been popular with its Sunni Arab base the following ones were not and by the end of the regime it was widely ridiculed. Here Davis finally finds his mark. He does a good job documenting how the Baathist failed at winning over the people to its ideas. In so doing, he believes that the Iraqi state was much weaker than many portrayed it because it steadily lost support.

Memories of State is a mix of a history of Iraq and the development of ideas and intellectuals. It’s written like a thesis so it begins with a review of the literature on the topic before presenting Davis’ thesis. Some sections work like the Baathist period, while the author’s argument has issues in others. It’s still very interesting to read because it takes a different approach to other books on Iraq.