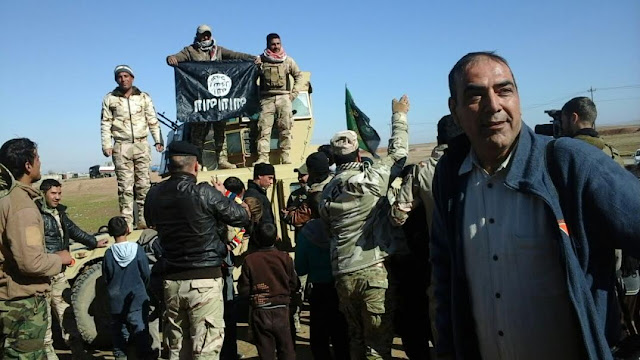 100 days into the Mosul campaign and east Mosul was finally liberated. At sunrise the 9th Division and Rapid Reaction forces seized all of Rashidiya and Shreikhan. The 9th and 15th Divisions also took Bawiza, Baisan, Haditha, Jurf al-Milih and the Ninewa diary plant all in the northeast. Prime Minister Haidar Abadi then announced that half of Mosul was recaptured. The initial attack upon the city did not go well. The campaign plan stalled with forces in the north and south never reaching the city as they were supposed to. The premier ordered the Golden Division to enter the city on its own without any supporting units. When other forces did arrive they were acting unilaterally, and there was a famous ambush of the 9th Division in the southeast. Operations were halted in December, and then restarted at the end of the month, with Iraqi forces (ISF) cooperating with each other, and greater support from the U.S. coalition. That included knocking out all the bridges across the Tigris that cuts through the middle of the city, which severely limited the ability of the Islamic State to resupply its fighters. This new effort was able to quickly pierce the Islamic State’s defenses and seize the entire western section of Mosul in under a month.

The ISF are now set on attacking west Mosul as soon as possible. All the talk is about a head on assault across the Tigris River using pontoon bridges supplied by the United States. Some forces may be shifted to the south where they could cross the river freely without having to worry about the Islamic State. Then again, Iraqi commanders keep talking about IS as being a defeated force, so perhaps they are thinking that once they get through the initial defense on the riverbank the insurgents will quickly crumble as they have in the last few weeks.

In another twist, General Abdul Amir Rasheed Yarallah said that the Hashd would take part in the second half of the offensive. Reportedly this will be the Al Abbas Division, which follows Grand Ayatollah Ali al-Sistani. A Shabak Hashd brigade has already entered Mosul to clear and hold ground in the east. Originally Premier Abadi said that the Hashd would not be allowed inside Mosul. He wanted the ISF to take the city so that the population would see the government as their liberators, and also because many people from Mosul said they feared Hashd abuses. The deployment of these Hashd forces likely means that there is a manpower shortage as some units will have to secure the east, while others move on the west. Without the Hashd they could not accomplish both of these missions.

As east Mosul fell there were more signs of the Islamic State’s defeat. The U.S. said it destroyed 10 IS boats taking fighters across the Tigris. The group publicly executed 25 of its fighters for retreating to make an example out of them. To the west in Tal Afar IS was reportedly evacuating its headquarters and destroying its records so that they would not be captured. The main question remains does this mean that the militants will not put up much of fight in the rest of Mosul or will they go down fighting as their last stand? The Iraqis are counting on the former, while the Americans are warning of the latter.

The U.N.’s Office of the High Commissioner for Human Rights held a press briefing about its concerns for the civilian population in Mosul. In the east, IS continued to kill and shell civilians in liberated areas. IEDs left behind and mortar fire has killed civilians in at least five districts recently. It is also attacking people attempting to flee its control. Coalition and Iraqi air strikes are also taking a toll on the population. Airwars for example counted 64 dead and 10 wounded by U.S. led air attacks during the third week of January. Since the inhabitants mostly stayed in the city the human toll of the fighting has been very high compared to previous battles such as Tikrit and Ramadi when there were hardly any civilians. They will continue to suffer casualties as a result.

Several news agencies and outlets all reported on school being re-opened in Mosul. A total of 70 schools are up and running again, with approximately 40,000 students. Parents talked about how the Islamic State taught children about war, and how girls were banned from even going. One parent lamented that this was a lost two years for his child as he should have been in the 3rd grade, but was still in the 1st. Offering education again is an important step in rebuilding life within Mosul. It is also a sign that the government is trying to restore its services, and that it will not discriminate against the residents for living under the insurgents.

Al Maalomah, “Daesh bombed houses in Mosul and the Federal Police rescued the injured,” 1/24/17
- “Daesh executed 25 of its fighters after withdrawing from Mosul battle,” 1/24/17

New Sabah, “Joint forces waiting for the Commander in Chief of the Armed Forces to order the storming of the right bank of Mosul,” 1/24/17