The Iraqi forces (ISF) reclaimed two areas of east Mosul and freed a third. Karama and Intisar in east Mosul were declared liberated on January 1, but it appears that was premature. On January 2 the ISF said that the two neighborhoods had finally been cleared. Nassir was also freed, which had been fought over since November. The Golden Division was still trying to free the northern section of Karama. The 16th Division pushing from the north claimed that it had finally reached the city, but that was an exaggeration. Ninewa officials criticized the division for the third time for missing Islamic State positions and shelling civilian ones instead and causing casualties. On January 2 they shelled three northern neighborhoods of Mosul destroying two car bombs. In the south the army and police have still not moved, but they were shelling Mosul as well. 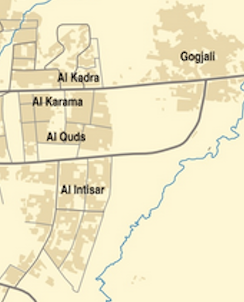 As usual the Islamic State was counterattacking inside and outside of Mosul. Mortars killed four civilians and wounding two others in two separate incidents, rockets fired on Tamim killed 18 and injured five more, a sniper killed a teenager in Mazra, and a car bomb in Karama left seven fatalities and five wounded. Three car bombs were also destroyed in Yarmja, and two in Karama. U.S. General Joseph Martin told the press that IS had limited resources in east Mosul, and he believed that those were running out. For example, the general said he was seeing fewer car bombs. Coalition air strikes have also been working to diminish the militants’ offensive capabilities with one destroying a suspected car bomb factory in east Mosul. IS attacked the Mosul-Baghdad road temporarily cutting it off. 5 car bombs were also destroyed in the Tal Afar district to the west of Mosul. The Hashd there are still in a holding position, as it appears that the ISF is in no rush to free the town.

Face Iraq, "Sources: the martyrdom and wounding of 23 people, including 10 security force members in missile attack by Daesh east Mosul," 1/2/17