The Iraqi forces (ISF) continued to plow through northeast Mosul. The 15th and 16th Divisions took Kafat 2 in the north. The Golden Division took Andalus next to the Mosul University. It was also clearing Nassir and Faisaliya nearby, and the school itself, as well as areas in the southeast along with the Federal Police. The Mosul Airport in the south was now in range of the ISF, and being shelled before it is attacked. A spokesman for the Joint Operations Command claimed that the government was now in control of 90% of the eastern half of the city, but it’s more like 75%. General Abdul al-Asadi from the Golden Division predicted that all of the east would fall in two days. Whatever the timeframe the battle has significantly changed. No longer are the ISF slogging through the city and continuously retaking the same areas. Now they are rapidly advancing across Mosul. 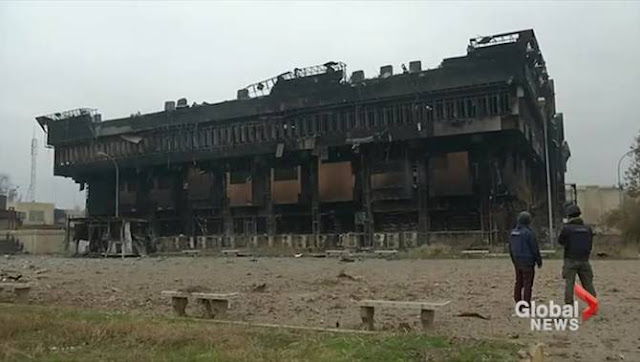 There were several reports about Mosul University. The campus was taken rather quickly. That was in part because there were no civilians there so more air strikes could be called in. It was a big loss for the Islamic State as it used the school as a command and control center. It also produced weapons there, and even a chemical lab was discovered.

Al Sumaria reported that IS head Abu Bakr al-Baghdadi demoted all the commanders in eastern Mosul for their losses. The source went on to say that they were placed on the frontlines as further punishment.

The humanitarian situation in east Mosul continues to be an issue. The U.N. reported that there are water and food shortages. The United Nations and a few other aid groups are providing packages to residents, but that’s not on a regular basis. Preemptive Love Coalition one of the few organizations working within Mosul challenged others to start operating inside the city. Most of the NGOs are in Kurdistan in part because it is safe, and second because the Iraqi government told them not to set up in Mosul. They need to mobilize so that they can service as many people as possible.

Reuters was the latest to report on the back and forth life for the people of Mosul. In some places people are starting to rebuild their lives. In Zuhur markets were open and kids were playing soccer. In other areas people were fleeing, and some were heading out of the city for Kurdistan. Once east Mosul is freed much of this internal displacement will hopefully come to an end. Of course then the assault on the western half will began, and a whole new movement of people will start.

Finally, the United Nations provided a glimpse into the casualties caused by the fighting. Since the Mosul campaign restarted at the end of December almost 3,000 injured were sent to hospitals in Irbil. 47% of those were civilians and 53% were members of the security forces. There is very little news coming out of Iraq about casualties, especially about the ISF. The U.N. is one of the few making any kinds of report on the losses.

Coles, Isabel, “In parts of Mosul, a semblance of normality despite war,” Reuters, 1/15/17

Al Forat, “Ninewa We Are Coming: the killing of tens of terrorists and clearing several districts in Mosul,” 1/15/17

New Sabah, “The combined forces control 905 of the left coast of the city of Mosul,” 1/15/17
- “Mousalaon activists are urging residents to support the security forces and reveal Daash,” 1/15/17

Shafaaq News, “Urgent..Iraq forces announce the full names of liberated areas from the grip of Daesh,” 1/15/17