Violence in Iraq fluctuated throughout 2016. During the start of the year security incidents were in a steady decline until May and June when they went up slightly during the Islamic State’s spring offensive. They then continued to spiral downwards until August when attacks went up reaching a peak in November, before dipping again in December. In 2015 8,473 security incidents were recorded by tracking over 40 Iraqi, western and Asian media outlets each day. In 2016 there were 7,447, a decline of 1,026 showing overall that violence has declined since its peak in 2014 when the Islamic State swept across northern and central Iraq. Since then the insurgents have continuously been beaten back and their resources to carry out operations has been diminished. During the first three quarters of 2016 the number of incidents shrank from 2,063 the first quarter to 1,936 the second to 1,678 in the third. They then saw an uptick to 1,770 in the fourth, but it was still below the level of the first half of the year.

The decline and rise in violence during the year could also be seen when incidents were averaged out per day. In January there was an average of 23.3 incidents per day, the highest amount of the year. That went down to 21.0 per day in April before going up during the Islamic State’s spring offensive when there were 21.7 incidents in May and 21.0 in June. After that however there was a sharp drop down to 17.1 per day in July. Then things picked up once more with 18.5 in August 19.1 in September, 19.0 in October, and 19.9 in November and 18.7 in December as there was a jump in attacks in Baghdad and then the Mosul campaign got underway. 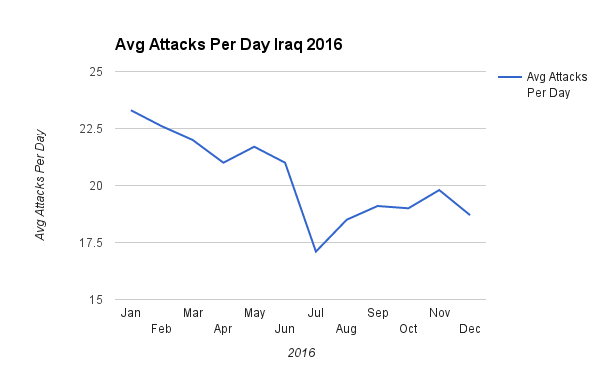 Baghdad and Ninewa accounted for 63% of the incidents in the country during the year. The Islamic State’s terrorist campaign in Baghdad followed the same pattern as incidents in the rest of Iraq. In January there was an average of 11.6 incidents per day. That dropped to a low of 8.9 per day in June and July before climbing back up to 10.1 in August and 10.8 in September. In October those figures dropped to 8.3 incidents, 7.9 in November, and then way down to 4.7 in Baghdad. It was unclear whether the low numbers at the finish were due to the end of the insurgent’s campaign or due to a lack of media coverage of the capital when the Mosul campaign began. In Ninewa there was a low level of violence, consisting of roughly 50-50 executions by the militants, and attacks upon the Peshmega and security forces. In January there was an average of 2.3. When the spring offensive took off there were 3.0 incidents per day in March, 3.5 in April, and 3.1 in May before going down to 1.6 by July. When the Mosul campaign started that jumped to 5.0 in October, 7.4 in November, and 10.1 in December. 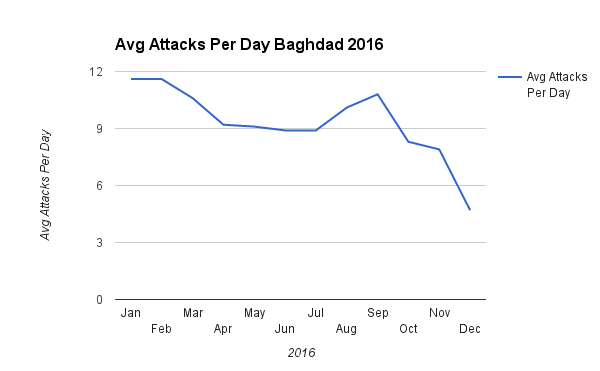 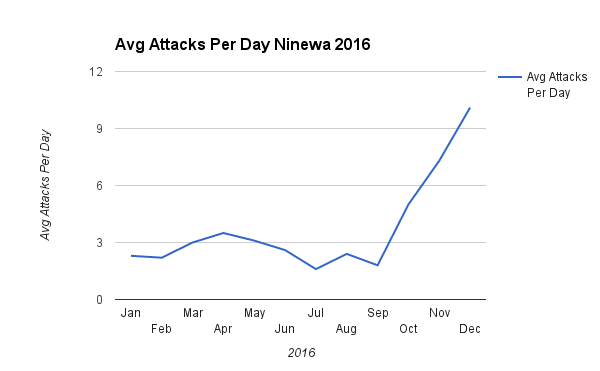 Despite the decrease in incidents the number of casualties actually increased from 2015 to 2016. In 2015 there were 26,078 fatalities and 26,021wounded for a total of 52,099. The number of injured should be 2-5 times higher than the number of deaths, but government censorship of its losses has distorted the figures. The next year there were 24,091 dead and 39,205 injured equaling 63,296. The rise from 2015-2016 was due to the Mosul campaign, which saw a huge number of civilian casualties in the last three months of the year, some of which got reported in the press. The true figures were likely much higher. Unfortunately that meant casualties were no longer a reliable measure of violence in the country. Since 2014 the government has suppressed its losses to maintain morale with none officially reported for any major campaigns such as Tikrit, Ramadi, Baiji or Fallujah. It is likely that thousands of members of the Iraqi forces have been killed and wounded in those battles and have not been officially recognized.

Violence By Province In Iraq 2016

Car and suicide bombings have followed the same general pattern as the average number of incidents per day. There was a drop at the start of the year going from 47 in January to 14 in February before a spike in those types of attacks during the spring offensive reaching a high of 63 in May. Then in the summer there was a lull of 16 in July before they slowly rising to 23 in August, 25 in September, 72 in October, 47 in November, and 76 in December. There were likely more from October-December that were not reported, but occurred during the Battle for Mosul. Violence In Iraq 2016 By Month