The Iraqi forces (ISF) continued to move forward in east Mosul. The Golden Division freed the industrial area next to Karama in the east. A car bomb was destroyed in the process. The Rapid Reaction forces, Federal Police and army freed Mithaq, Sumer, Morez, and Majma in the southeast. The Federal Police Chief Raed Shaker Jawdat told the press that the Islamic State’s Jund al-Khalifa, Soldiers of the Caliphate, headquarters was destroyed while going through Mithaq. Fighting continued in Dumiz, Shaimaa, Salam, Palestine, Wahda, and Sanah as well in the southeast to east. Karama in the east was declared freed twice in January, but there was a report that it was still contested. The northern front has still not reached the city, and was clearing the areas it had liberated. While much has been made of the renewed push into Mosul the actual strategy appears to be the same as before. The Golden Division backed up by the Federal Police are pushing in from the east, while trying to hook up with the Rapid Reaction forces in the southeast to encircle half of east Mosul. The move from the northeast still appears to be either behind schedule or stalled, and it doesn’t look like the northern or southern fronts are even pushing on the city. 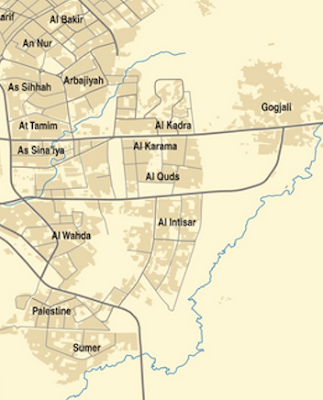 The Islamic State was active across east Mosul. Two car bombs hit the Falah 1 and 2 neighborhoods killing 18 and wounding 13. 10 car bombs were destroyed in Karama and the southeast, and 3 more in Sumer. Mortars hit Noor in the northeast wounding six, sniper fire in Karama wounded four, and rockets killed eleven. Finally, the army in the north outside of Mosul was attacked as well.

Al Jazeera noted the insurgents extensive use of drones in the battle. IS uses them to direct suicide car bomb attacks and mortar fire, gather intelligence, and film propaganda videos. The newest adaptation is attaching small explosive devices to them and dropping them on the Iraqi forces.

There have been several reports recently about how long the siege of Mosul will take. Iraq’s Prime Minister Haidar Abadi originally said that the city would be freed by the end of 2016, but that obviously didn’t happen. He has since revised that to March 2017. The Iraqi parliament’s security committee thought that was too optimistic, while some analysts believe it could take until the summer. Spring or summer seems more realistic. There is no telling how west Mosul will be compared to the east, and the ISF is still largely fighting over areas they have contested since November in the latter. Together that points to a long slog ahead.

The number of displaced from the conflict continued to climb. The average number of people fleeing per day has increased by almost 50% from around 1,600 per day to more than 2,300 according to the United Nations. More than 13,000 people had been displaced from December 29 to January 2. On January 3 the 16th Division north of Mosul evacuated 300 families alone. Reuters had a story on the increased attempts by people in west Mosul to get out of the city. One man interviewed said that at first people he knew were going to stay put in their homes during the battle, but now that it is dragging on they were changing their minds. Trying to escape is dangerous as the Islamic State has punished and executed people it has caught. The majority of the displaced are also in camps, which they cannot leave due to security concerns. Winter is on which means that the conditions in these camps is deteriorating, leading aid groups to scramble to provide heaters, etc.

Rudaw had a piece about the town of Khursabad to the east of Mosul. The village was liberated by the Peshmerga in late October 2016. Only three families have returned there so far. That’s because the place is largely destroyed from the fighting to capture it, there are many IEDs left behind, and there are no services. This story can be repeated throughout much of Ninewa province. It will likely be some time before large numbers of people go back to their homes.

Finally, there was a story in eKurd about the Kurds attempt to control the areas they freed. Qaraqosh, east of Mosul is controlled by the Ninewa Protection Unit a Christian militia. The Peshmerga however have stopped supplies being sent to them. The Kurdistan Democratic Party (KDP) that ran much of northern Ninewa tried to co-opt the various ethnic groups in the province before the Islamic State swept through in 2014. Since then its carrot and stick approach to controlling these groups has been frayed, and now it is attempting to re-assert its hegemony over them.

Al Maalomah, “Parliamentary security committee underscores the need for more than three months to resolve the battle of Mosul,” 1/3/17

Al Mada, “The evacuation of 300 families from Mosul to camps in the northeast,” 1/3/17
- “Mosul operations resume freeing five neighborhoods with the assistance of the Federal Police and Rapid Intervention Forces,” 1/1/17