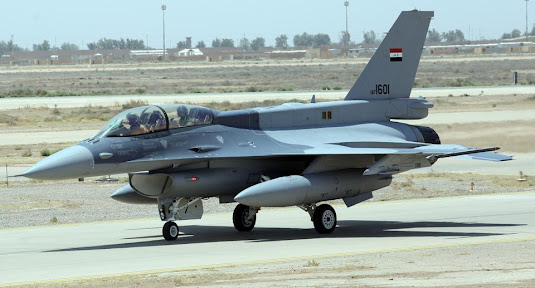 (Getty Images)
On February 13 the commander of the Iraqi Air Force General Shihab Jahid Hama said that Iraqi technicians could service the country’s fleet of F-16 fighters and keep them flying without foreign help. He noted that on January 6 during the Army Day celebration 24 F-16s made a fly over and they just carried out a strike against the Islamic State. This contradicts a U.S. government report that said Iraq’s planes were out of service for months while American contractors were out of the country.

The February 2021 report by the Inspector General to the U.S. Congress noted that while American technicians were out of Iraq its F-16s were not flying. Due to COVID and threats from pro-Iran Hashd groups American contractors left the Balad Air Base where the F-16s are stationed at. They did not start returning until the end of 2020. As a result, the planes did not fly any combat mission from April to September. The Inspector General talked with Iraqi pilots who said they were not convinced that their planes could be maintained without U.S. assistance.

The five months out of action meant that the Iraqi pilots needed to fly before they could return to combat. That meant from October to December 2020 the F-16s flew 271 sorties, but 267 of those were for training. During that same period the jets only carried out two strikes against IS.

A similar problem arose with Iraq’s L-159 planes. These jets were bought from the Czech Republic and when that country withdrew its contractors last year the L-159s stopped flying. When some Czechs returned around the same time as the Americans two planes returned to flight status. That also means those pilots need to fly training missions to regain proficiency as well.