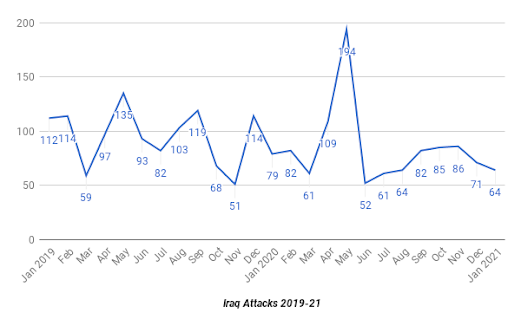 Violence in Iraq continues to decline since November 2020. That month there was a five month high of 86 incidents by the Islamic State. After that it went down to 71 incidents in December to 64 in January 2021. At the same time the number of attacks by pro-Iran groups remained the same from December to January with 13 each month. This appears to simply be the result of the ebb and flow of the low level insurgency over the last year in the country. 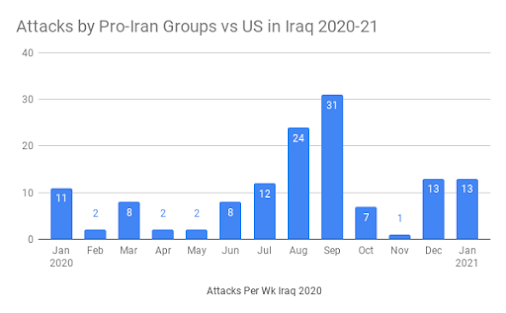 Offshoots of Hashd factions aligned with Iran carried out 11 IEDs on convoys carrying supplies for the U.S. with one being dismantled before it exploded. There was also one rocket attack upon the Baghdad International Airport in January. The bombings were spread across Salahaddin (1), Muthanna (2) Babil (3), Baghdad (3) and Dhi Qar (3). There were 13 attacks by these groups in December, but only one in November. In December the pro-Iran groups picked up their operations because of the anniversary of the deaths of the Iranian Revolutionary Guards Quds Force commander General Qasim al-Soleimani and the deputy head of the Hashd Commission Abu Muhandis was in January. New groups took responsibility for these attacks but they are likely connected to Asaib Ahl Al-Haq and Kataib Hezbollah.

92 peopled died made up of 16 Hashd al-Shaabi, 30 Iraqi Security Forces (ISF) members, and 46 civilians. Another 176 were wounded consisting of 2 Asayesh, 22 ISF, 27 Hashd, and 125 civilians. This was a dramatic increase from January’s casualty count because of a double suicide bombing in Baghdad that left 32 dead and 110 wounded. This was a shock to the country because it had been three years since such a deadly incident had taken place. 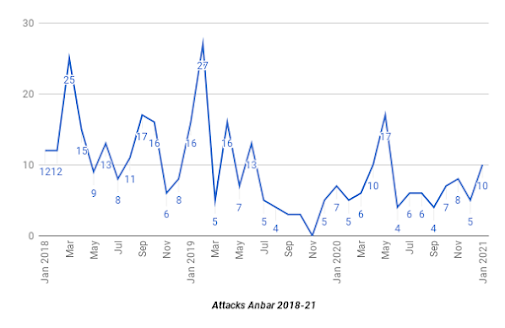 Anbar went through the biggest change in Iraq. There hadn’t been any real activity in the governorate since May when the Islamic State launched a spring campaign. Before and after that attacks were in single digits and usually just IEDs and small shootings because it was mostly used to bring in men and material from Syria. In January however there were 10 attacks including a checkpoint that was shot at, an attack upon soldiers, a suicide bomber killed, and 3 gun battles. This was the first steady pace of offensive operations in the province since 2019. 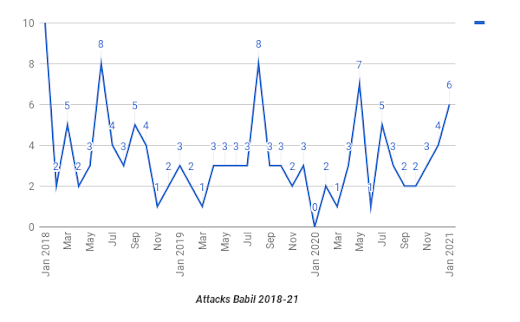 Incidents in Babil also went up from four in December to 6 in January. That was the most since seven in May. These were all in the Jurf al-Sakhr district in the northeast which is a large Kataib Hezbollah base. That points to IS trying to infiltrate back into the area because there are so many targets there. 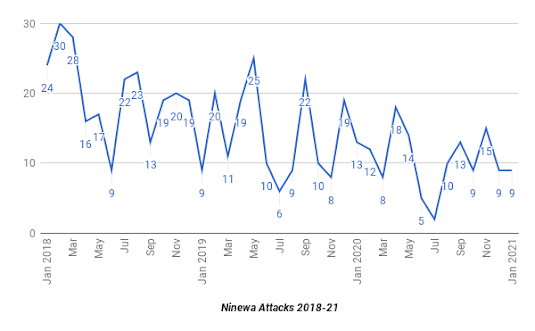 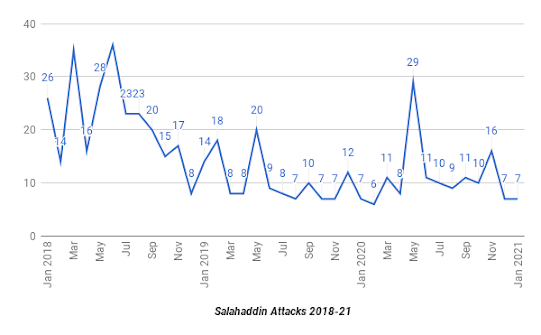 Ninewa and Salahaddin were relatively the same from December to January. There were 9 incidents both months in Ninewa and 7 in both months in Salahaddin. There was a bombing in the former that killed 9 including 8 soldiers and a regiment commander and wounded another 2 soldiers. Likewise in Salahaddin there was a gun battle that left 11 Hashd dead including a brigade commander and 12 wounded. Since the spring IS has been fighting a war of attrition against the security forces and they regularly account for the most casualties each month. 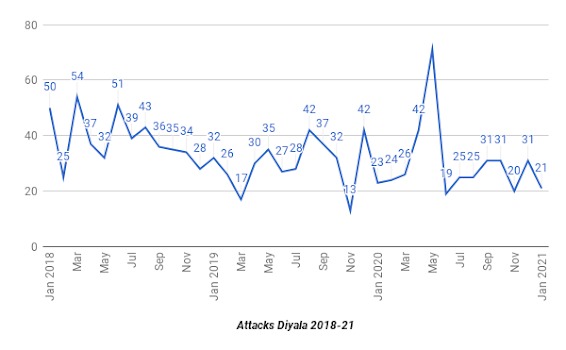 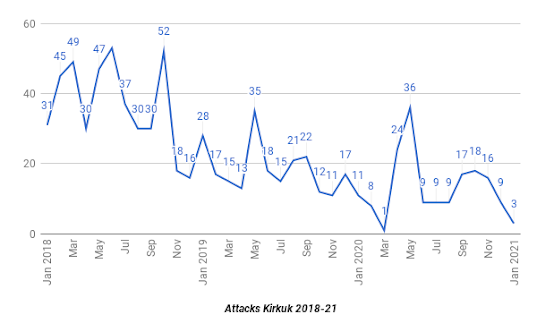 As a sign of the winter decrease incidents dropped from 31 to 21 in Diyala and 9 to 3 in Kirkuk. Diyala is regularly the most violent part of Iraq. Almost all the incidents took place in the Muqdadiya district in the center and Khanaqin in the northeast. The security forces were the main targets resulting in 12 out of the 17 dead coming from the ISF and Hashd and 13 of the 19 wounded. The biggest incident in Kirkuk came at the hands of the government when it killed the Wali for Iraq Abu Yasser al-Issawi in an operation in retaliation for the Baghdad bombing.

Iraq Newspaper, "Lieutenant Colonel Haider Adel, commander of the 2nd Regiment, 15th Division in the Iraqi army, was killed by a booby-trapped hut planted by ISIS north of Tal Afar," 1/17/21

Kittleson, Shelly, “Iraq, coalition partners had been on trail of IS commander a ‘long time,’” Al Monitor, 1/30/21

Shafaaq News, "ISIS is carrying out an attack on the Tribal Mobilization Forces in western Iraq," 1/3/21