Review Ally To Adversary, An Eyewitness Account Of Iraq’s Fall From Grace 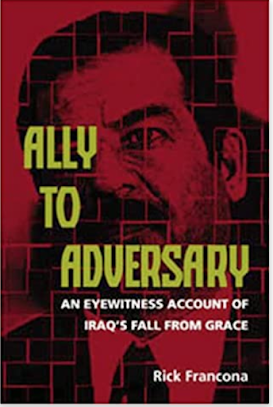 Rick Francona was an American Air Force intelligence officer and a member of the Defense Intelligence Agency. He had a very interesting career. During the Iran-Iraq War he was part of a military liaison team deployed to Iraq. Then during the Gulf War he was the interpreter for General Norman Schwarzkopf. Francona’s book Ally To Adversary, An Eyewitness Account of Iraq’s Fall From Grace is a journal of his involvement with Iraq.

Francona was one of the few Americans who got to see the Iran-Iraq War up close. In 1987 after the Iraqis accidently attacked a U.S. ship in the Persian Gulf Washington set up a military liaison program. Francona was part of this mission and regularly met with the Iraqi Directorate of Military Intelligence. While there he got to tour Iraqi trenches after it retook the Faw Peninsula in Basra in 1988. He immediately noticed that the Iraqis used WMD in the attack which was denied at the time. He also noted that while the Iranians occupied the area they regularly fired artillery at Kuwait to harass it for its support of Iraq. He noted the growth in Iraqi capabilities at the very end of the conflict with Baghdad being able to move entire divisions from the north to the south due to its heavy investment in military transports. On the other hand because the Iranians had no real aerial surveillance capabilities they didn’t hide their movements at all, which would cost them during the Gulf War. While Francona’s discussion of the war is short it provides an interesting overview of how the Iraqis were fighting at that time. Their logistics and WMD would prove to be two of the most important factors in them being able to expel the Iranians from Iraq.

Most of the book deals with the Gulf War but again it’s more like personal reflections than a detailed history. There are some interesting little tidbits. The Jordanians for instance covertly provided intelligence and material to Iraq. Jordanian military officials told the Iraqis that the Iran-Iraq War was a land battle and they were completely unprepared for the power of the U.S. Air Force they were about to confront. Some munitions boxes with Jordanian markings were also found with the Iraqis after the war was over but it was unclear if they were newly arrived or were from the Iran-Iraq War. Francona also went through the draconian demands the Saudis originally made upon the U.S. They initially wanted the blood supply at military hospitals to be divided between Christian and Muslim so that they never mixed. They also wanted all waste produced by the Americans to be taken out of the country so that it didn’t pollute Saudi soil. Those were later dropped. Saudi military officers also cheered at the joint U.S.-Saudi command center when Iraq first fired missiles at Israel. The Saudi officers said that while Iraq was the immediate enemy, Israel was the long term threat. The culture clash between the Americans and Saudis was definitely apparent. The two sides had to make a lot of compromises and it seems like Francona was never quite happy with the Saudis. What’s disappointing is that even though the author was at the top of the U.S. command working for General Schwarzkopf he never discussed anything that special or new.

Ally To Adversary has some interesting anecdotes on Francona’s time working in the Middle East but it isn’t good for much more. There are few details on the Iran-Iraq and Gulf Wars and nothing that can’t be found in other books. It’s more like him reminiscing then a real review of the conflicts.