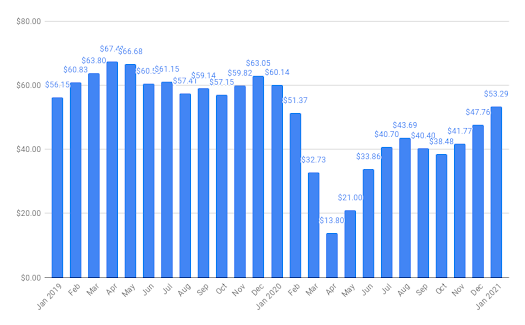 For the second month in a row Iraq increased its oil exports despite a promise to cut production to meet its OPEC quota. It came at an opportune time as prices for Iraq’s petroleum finally passed the $50 a barrel mark thanks in part to OPEC.

In January Iraq exported an average of 2.868 million barrels a day. That was up from 2.709 million in November and 2.846 million in December. This was despite Baghdad once again promising to cut back on its oil production in January and February to make up for consistently overproducing throughout 2020 despite its agreement to follow the OPEC+ deal. Iraq has not complied with the agreement nor previous ones because it is the most oil dependent country in the world. When the energy market collapsed last year it put the country into an economic crisis. It’s been unable to meet its basic bills for months now and therefore wants to produce as much as possible to maximize its revenues. That has led exports to go up and down for months now as the Oil Ministry cuts back some output and then boosts it again due to political pressure.

January was the first time Iraqi crude sold for over $50 since February 2020. A barrel went for $53.29. Prices dipped to $38.48 in October and then slowly rose after that. As a result Iraq earned $4.739 billion the most since $5 billion in February 2020. This increase will greatly help the 2021 budget which is the largest in history despite the government being broke and will make a large cut in the projected deficit. That doesn’t mean Baghdad is out of the woods but the extra cash will definitely help.