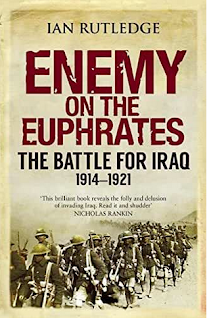 Enemy On The Euphrates, The Battle For Iraq 1914-1921 is a very interesting and easy read on the British colonization of Iraq and the revolt that it inspired. The rebellion was one of the largest the British faced in the 20th Century and almost expelled them. The book is divided into two main parts. The first covers how oil drove the British to conquer the area of the Ottoman Empire that would become Iraq during World War I. That leads to the second half on the 1920 Revolt. The author Ian Rutledge’s thesis was the insurgency was led by religious leaders, landlords and commoners who opposed the British during the war and then led the earliest expression of Iraqi nationalism.

The book begins with England’s imperial policies during World War I. Even before the war the British realized that oil would be the future of energy and it was needed for its military and economy. As early as 1904 London found out that not only was there possible petroleum in the Ottoman provinces that would become Iraq but that a German company was given an oil concession to explore it. The navy also began converting to coal to oil right before the conflict opened. That provided the main motivation for the British to order the invasion of Basra province in 1914. The English wanted to protect its oil interests in Persia. That quickly led to the decision to move north to take Baghdad and Mosul provinces which were also believed to contain petroleum deposits. The mission quickly became dismantling the Ottoman Empire and getting its oil. Rutledge provides meeting after meeting, memo after memo to prove his point that London could see the importance of oil and made that its main priority in its war against the Ottomans.

An important part of this story was that many of the local Arabs sided with the Ottomans rather than the British which goes against the popular narrative. Lawrence of Arabia, the press he created, his book, and then the subsequent movie created a myth that the Arabs rallied to the English in the Arab Revolt to fight the Ottomans during World War I. Rutledge points out up to 1/3 of the Ottoman forces were Arabs and there were tens of thousands of tribesmen that joined them as well. Local clerics called for a jihad against the British. Many of these fighters and leaders would later join the 1920 Revolt when the British created Iraq.

That brings up the next major section of Enemy Of The Euphrates. The British were always going to take parts of the Ottoman Empire and directly rule them even when it talked about an Arab independence state eventually emerging. The head political officer in Iraq Sir Arnold Wilson did not believe Arabs were capable of governing themselves and went about dividing up the area into administrative districts with British officers in control of each one. The problem was when the English arrived in Baghdad during the war they issued a statement that they came as liberators and that Arabs would be allowed to rule. Many of the clerics and landlords who fought with the Ottomans during the war were angered at British governance, especially taxes, and began forming organizations calling for Arab nationalism. Wilson would not deal with any of them and that eventually led to the 1920 Revolt. Najaf and Karbala became the centers of the nationalist movement that called for Sunni-Shiite unity in the face of British imperialism and spread up and down the Euphrates River and eventually to Diyala which is along the Persian border. Again, Rutledge proves his research by giving a very detailed discussion of how the British decided on what they would do with the Ottoman provinces that became Iraq and how that led to resistance amongst the locals that created the rebellion. He then gives an almost day to day coverage of the fighting and the British reinforcements that arrived that turned the tide. It doesn’t end there as Rutledge also documents how the English carried out a scorched earth policy afterwards to punish the entire mid-Euphrates area for rising up that included killing numerous civilians, destroying crops and burning villages. The idea was that the Arabs who were always looked at in racist terms needed to be taught a lesson.

Enemy On The Euphrates provides a detailed history of two important segments in Iraqi history. One was the decision by the British to invade and create the country to gain its oil assets. The other was the beginning of Iraqi nationalism. The 1920 Revolt joined the landed elite with the Shiite religious establishment and tribesmen and peasants. It called for Shiites and Sunnis to rise up together to expel the foreign invader. It created its own administration in the areas it liberated. This questions some of the major Western stereotypes about the country that it was always divided by sect which made nationalism nearly impossible. The author writes in an engaging style which makes the book very enjoyable and educational.