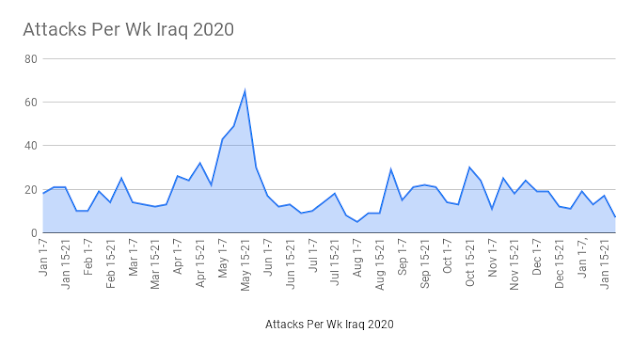 Pro-Iran groups set off bombs against two convoys carrying supplies for the U.S., one in Babil and the other in Dhi Qar. Rockets were also fired at the Baghdad International Airport. One fell short and landed on the residential Jihad neighborhood. New organizations took credit for the three incidents but they are likely working for or with Kataib Hezbollah and Asaib Ahl Al-Haq. 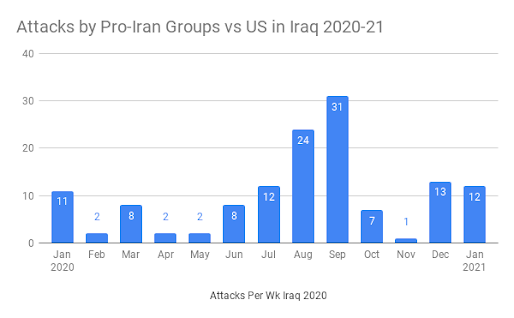 13 people were killed and 12 wounded during the week. 11 Hashd al-Shaabi and 2 civilians lost their lives and 12 more Hashd were injured. Those took place in Diyala and Salahaddin.

Anbar, Baghdad, Diyala, Kirkuk and Ninewa saw small incidents. In Anbar there was a gun battle with insurgents during a security sweep in the west. In Baghdad a suicide bomber was arrested reportedly aiming at Tayaran Square again which was bombed the week before. Diyala saw two shootings, one of which killed a campaign manager for a candidate running in the 2021 elections. A town in the Riyad district was hit by a mortar in southern Kirkuk. There was another shootout in Ninewa in the south.

The biggest event was a large confrontation between IS and the Hashd in eastern Salahaddin. That saw 11 Hashd killed and 12 wounded. Amongst the dead was a brigade commander. The Hashd released all kinds of statements afterward about how they had prevented a massacre of civilians and how heroic they were but that was all propaganda.

Al Forat, "In pictures, the crowd thwarted an infiltration attempt by ISIS in Naft Khanna," 1/26/21

NINA, "An explosive device exploded on a convoy of logistical support for the International Coalition in Dhi Qar," 1/26/21

- "Reports of a terrorist attack on one of the Popular Mobilization brigades in Nineveh," 1/24/21