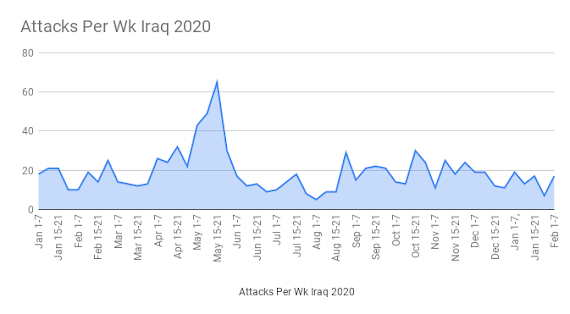 For the last two months violence has been at a low level in Iraq and that continued during the start of February. There were just 19 incidents in the first week of February with two of those by pro-Iran groups. 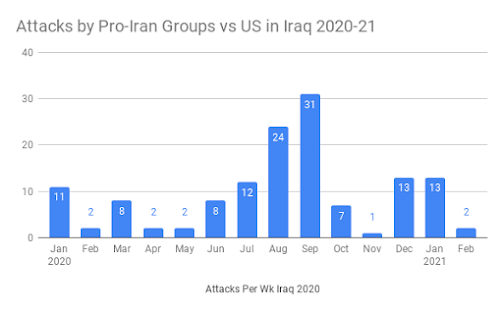 The two attacks by groups linked with Iran both occurred in Babil. There two convoys carrying supplies for the U.S. were hit by IEDs. Since December these organizations have been carrying out a steady pace of operations against American targets.

11 people died as a result made up of 2 civilians, 4 Iraqi Security Force (ISF) members and 5 Hashd al-Shaabi. Another 23 were wounded made up of 1 civilian, 9 Hashd and 13 ISF. As usual the security forces faced the highest casualties as part of the militants war of attrition against them.

IS continued its attacks in Anbar with an infiltration attempt, an army convoy being hit and two shoot outs. Before the province was just used for logistics, but since December the insurgents have returned to regular attacks.

In Baghdad an IED was dismantled in the center of the city.

Diyala was the most violence governorate as usual. All of the six incidents were low level but one. That was when a shootout with the Hashd in the Khanaqin district in the northeast left 5 dead including a brigade commander and another five injured. The Islamic State has been going after officers in the security forces for the last few months and this was the latest example. Four of the 6 incidents were in Khanaqin with one in Muqdadiya and one in the west.

A checkpoint was hit by gun and mortar fire in the Daquq district in the south of Kirkuk. That left 1 policeman dead and five wounded. There were two other incidents which were small shootings.

Two voter registration offices were attacked in Ninewa. One was burned while the security forces stopped another such incident from happening. The election is due in October and more such acts are likely as that date nears.

An army convoy was shot at by a sniper in the Tuz Kharmato district in eastern Salahaddin.

AIN, "Dismantling an explosive device in Jordan Square in the capital, Baghdad," 2/2/21

- "Violent clashes between the Popular Mobilization Forces and ISIS in Anbar," 2/4/21

Iraq Newspaper, "The ISIS terrorists kill and injure ten members of the Badr Corps in Hadi al-Amiri's Governorate, including the commander of Operations," 2/2/21

NINA, "A convoy for logistical support for the US forces targeted in Babylon Governorate," 2/7/21

- "A doctor survived an assassination attempt near Khanaqin in Diyala," 2/5/21

- "An IED Explodes On A Vehicles For The PMF Northeast Of Baquba, But No Injuries," 2/3/21

- "A security source announces to NINA that an attempt to burn down a biometric modernization center south of Mosul has been foiled," 2/6/21

- "A person was killed and his brother wounded in an armed attack in Diyala," 2/3/21