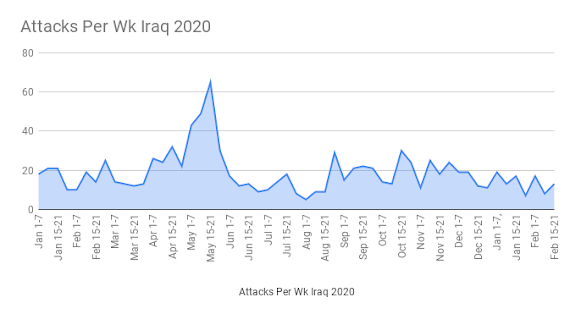 The winter lull in attacks by the Islamic State continued into the third week of February. Pro-Iran groups on the other hand looked to be increasing their attacks upon American targets in Iraq.

There were a total of 20 security incidents reported in Iraq from February 15-21. 7 were by pro-Iran groups leaving 13 by the Islamic State. 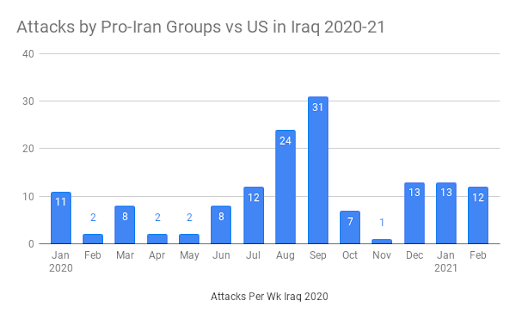 Pro-Iran groups carried out five IED hits upon convoys carrying supplies for the U.S. with one in Baghdad, one in Dhi Qar, one in Diwaniya and two in Basra. As a sign they were increasing their attacks there was also a rocket attack upon the Irbil airport which killed two civilians and wounded another eight including a U.S. soldier. Five days later rockets rained down upon the Balad Air Base in Salahaddin that wounded two contractors. The last missile attack was on January 22 when the Baghdad airport was hit.

Since December attacks by the Islamic State have been in the teens or single digits. During the third week of February there were 13 incidents spread across Babil (1), Baghdad (1), Ninewa (1), Salahaddin (1), Kirkuk (3), and Diyala (6).

A total of 11 people were killed made up of 1 Iraqi Security Forces (ISF), 3 civilians and 7 Hashd al-Shaabi. Another 23 were wounded including 1 U.S. soldier, 4 ISF, 9 civilians and 9 Hashd.

In Babil the insurgents were able to kill Kataib Hezbollah’s special forces commander with in an IED bombing in Jurf al-Sakhr. Two other Hashd were wounded. During the spring IS announced a war of attrition against the security forces and it has been targeting officers as part of that campaign.

A suicide bomber was reportedly arrested in Baghdad. This was likely an attempt to commit another mass casualty bombing in the capital. Luckily the security forces prevented it.

Diyala remains the center of Islamic State activity in Iraq. There was a sniper incident, a gun battle, a village hit by mortar fire, a kidnapping, a police station was hit by a rocket, and a village was assaulted. One of these attacks occurred in the Azim area in the northwest, two were in Muqdadiya in the center and the rest were in Khanaqin in the northeast.

All three incidents in Kirkuk took place in the Daquq district in the south. An army convoy was hit by an IED, a suicide bomber was killed, an a civilian was shot and killed. An IED was reported in the Hamam al-Aleel area south of Mosul and another in the Tuz Kharmato district of eastern Salahaddin. Violence has been down in these provinces as part of the winter decline.

Al Forat, "Regional Health: 3 wounded in the bombing of Erbil, including a guard for a foreign consulate," 2/15/21

IM Lebanon News, “The Pentagon: An American civilian was killed and 6 others were wounded, including an American soldier, in the missile strike on Erbil,” 2/15/21

Iraq Newspaper, "ISIS terrorist targets Jalawla Police Station with two missiles and the Hummer bombing in Mosul, and publishes two statements about them," 2/19/21

NI-"A convoy of logistical support for the International Coalition forces targeted in Basra," 2/19/21

- "The Hezbollah Brigades announce the martyrdom of one of their leaders north of Babylon," 2/20/21

- "An Iraqi contractor was wounded by the bombing of an American company inside the Balad Air Base with missiles," 2/20/21

Al Noor, "Targeting a convoy to support the International Coalition with an explosive device on the Nasiriya highway," 2/17/21

- "A security force kills a suicide bomber who tried to blow himself up in Daquq," 2/18/21

Al Sumaria, "A bomb targeting a convoy to support the international coalition on the Basra highway," 2/18/21

- "An explosive device targets an international coalition convoy on the Diwaniya road," 2/18/21