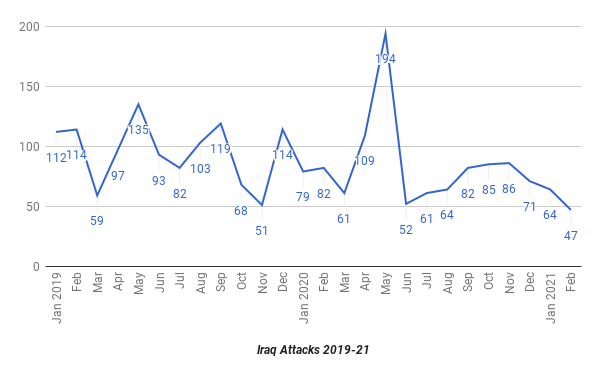 Violence in Iraq has been going in two directions over the last few months. Since November the Islamic State has been ramping down its operations in Iraq. By February 2021 the number of security incidents reached one of the lowest levels since the U.S. invasion. On the other hand, pro-Iran groups have picked up their attacks upon American targets during that same period.

There were a total of 63 incidents reported in the media during February. 16 of those were by pro-Tehran factions leaving just 47 by the Islamic State. 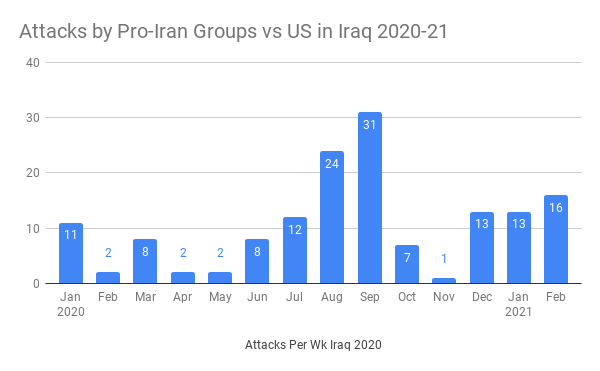 In November 2020 there was just one attack by groups aligned with Iran. Since then there have been 13 in December, 13 in January and 16 in February. The type of incidents have also grown more serious in February with three rocket attacks upon the Irbil Airport that left 2 dead and 8 wounded, one upon the Balad Air Base in Salahaddin that left 2 injured and upon Baghdad’s Green Zone. That was the most casualties since September 2020 when 6 died and 10 were wounded by these factions. Front groups always claim responsibility for these incidents but they are connected to Asaib Ahl Al-Haq and Kataib Hezbollah who appear to be competing to be the leader of these organizations since the death of Iranian Revolutionary Guard Quds Force General Qasim Soleimani and deputy head of the Hashd Commission Abu Muhandis.

The number of attacks by the Islamic State has gone from 86 in November 2020 to 71 in December to 64 in January and 47 in February. That last figure was one of the lowest monthly totals since 2003.

39 people were killed during the month consisting of 9 Iraqi Security Forces (ISF), 11 civilians and 19 Hashd al-Shaabi. Another 77 were wounded made up of 1 U.S. soldier, 11 civilians, 25 Hashd al-Shaabi and 40 ISF. In April IS announced a war of attrition against the security forces. That continued in February with 93 of the 116 casualties coming from the government’s forces. 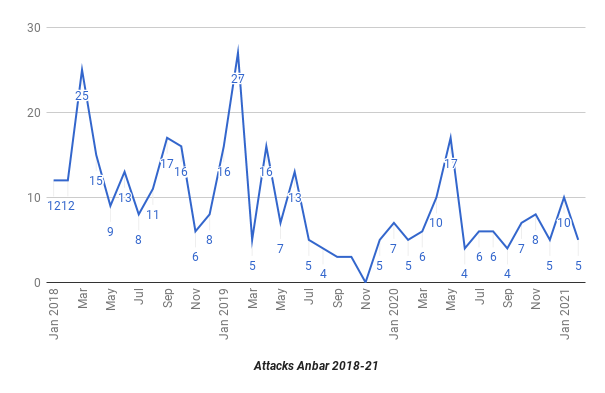 In January IS appeared to be returning to Anbar. Not only were there weekly attacks but there were more serious like a series of gun battles. There were 10 incidents that month going down to 5 in February. An army convoy was shot at, there were two gun battles and a car bomb detonated while the security forces were attempting to disarm it. Still, it seems like the province returned to the norm and January was an outlier. 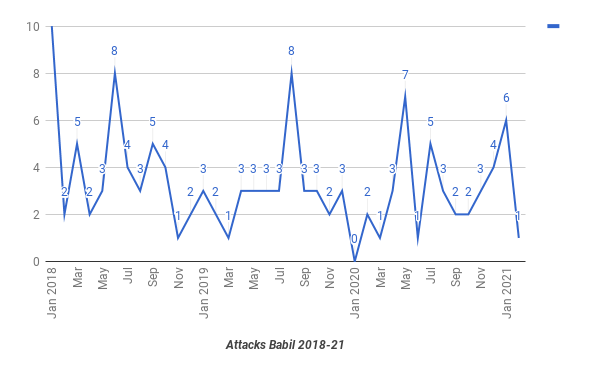 The same thing happened in Babil. In January there were 6 incidents, the most since May 2020. Then in February there was only one. That one attack was important because it killed the Special Forces commander of Kataib Hezbollah. This was the latest hit in the war of attrition where the militants have been targeting officers and commanders in the security forces. 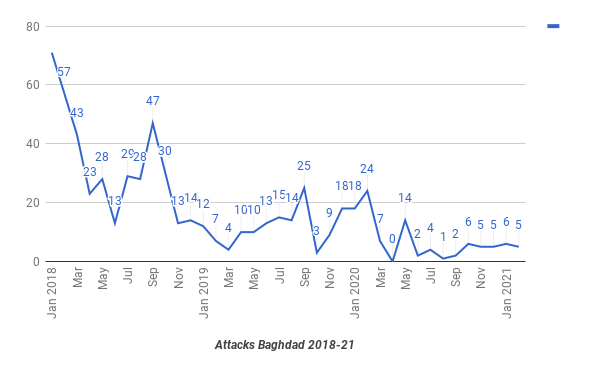 Violence has remained steady in Baghdad over the last five months with 5-6 incidents per month. There was one shoot out in Tarmiya in the north, but otherwise all the other attacks were small in scale. 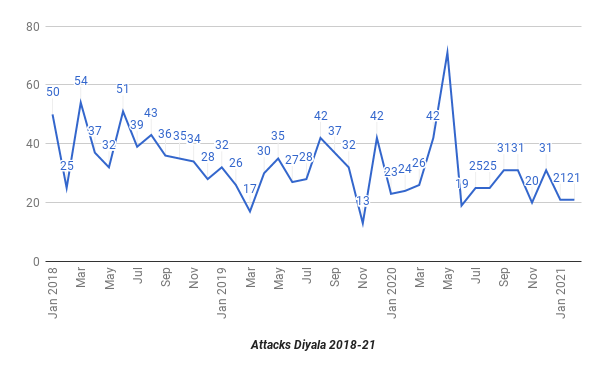 Attacks also remained the same in Diyala with 21 attacks in January and February each. There were 2 kidnappings, 2 attacks on towns, 3 checkpoints were assaulted and 3 gun battles. Most of these occurred in the Khanaqin district in the northeast which is the main base for IS in Iraq. 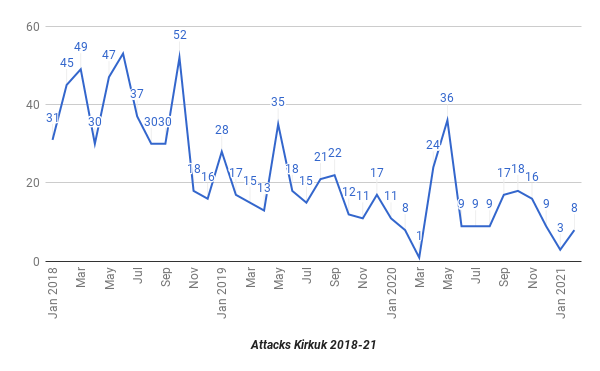 Kirkuk was the only province where incidents went up from 3 in January to 8 in February. Those were all routine shootings and IEDs. 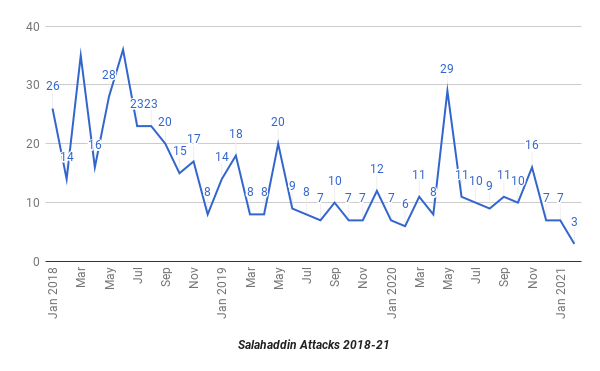 Ninewa and Salahaddin saw the sharpest declines during the winter. Attacks went from 9 in January to 4 in February in Ninewa and 7 to 3 over those two months in Salahaddin. Ninewa has mostly been used as a transit point to bring in men and material from Syria so it has usually been quieter than other provinces. Salahaddin however has major bases in the southeast.

There could be various reason for IS’s hiatus during the winter. The group could be building up for its annual spring-summer offensive or it could be prioritizing rebuilding and preservation right now. The group has just suffered some major leadership losses with its commander for Iraq being killed at the end of January so it could be moving around its assets and personnel to protect them. Still this is all speculation for now.

AIN, "Violent clashes between the Popular Mobilization Forces and ISIS in Anbar," 2/4/21

Al Forat, "Regional Health: 3 wounded in the bombing of Erbil, including a guard for a foreign consulate," 2/15/21

IM Lebanon News, “The Pentagon: An American civilian was killed and 6 others were wounded, including an American soldier, in the missile strike on Erbil,” 2/15/21

NINA, "The Hezbollah Brigades announce the martyrdom of one of their leaders north of Babylon," 2/20/21

- "An Iraqi contractor was wounded by the bombing of an American company inside the Balad Air Base with missiles," 2/20/21

Al Sumaria, "Hashd repelled an attack by ISIS on a station of the crowd in Garma," 2/2/21