Review The Industrialization Of Iraq, Harvard Middle Eastern Monographs, No. 5 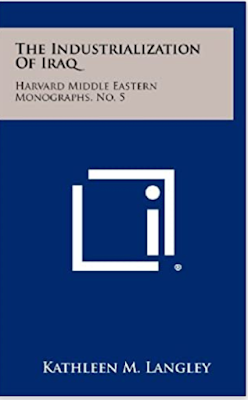 The Industrialization of Iraq by Kathleen Langley is an overview of the development of Iraq from the Ottoman era up to the 1958 coup. The author found  no real plan to grow the economy until the 1930s. When one was finally created it was haphazard at best and failed in its goals. Langley’s thesis is that Iraq had potential for growth and the money to do it with its oil profits but only helped the rich and not the public overall.

Langley notes that Iraq always had the possibility for growth. In the 19th Century the Ottoman provinces that became Iraq came into contact with foreign, mostly British traders. That led to export processing plants for things like dates being set up by English businesses along with a textile factory created by a Turkish governor. During World War One the British occupied Iraq and tried to expand agriculture and manufacturing to support its troops. Despite this potential development was very limited and mostly in foreign hands. The plants set up by the British army for example couldn’t compete with cheap imports. The selling of farm products benefited the large landholders who spent their wealth on importing foreign goods. This was the pattern that Langley found throughout Iraqi history. Little planning by the government. Local companies that couldn’t compete with imports. The rich benefiting from the growth that did happen.

Jump forward to the 1950s and Langley discovered the same thing happening. In 1950 Baghdad renegotiated its royalties with the oil companies which greatly increased its revenues. 70% of them went to the Development Board that was to create a national plan for the country. At first, half its expenditures went to irrigation, land reclamation and flood control and industry was ignored until the late 1950s. This was an effort by the government to directly plan the economy. It failed as well. The author points out that work on water and land helped the landlords to expand their holdings without improving the lot of the peasants. Since the vast majority of workers were poor a domestic market was never created that could then buy manufactured goods from domestic factories. Growing agriculture and industry therefore went hand in hand but the Development Board only catered to the rich.

The author also brings up how little Iraq’s bureaucracy has changed over the decades. Under the Ottomans for example the administration was highly centralized with even the smallest decisions having to get the highest authority to approve often leading them to being sent to Constantinople for an okay. Under the British Mandate after World War I that system was maintained. When Iraq got its independence politicians also created patronage systems for their followers and hired more workers than were necessary. That led to an apathetic and bloated bureaucracy. All of these trends still exist today in Iraq. That is a great detriment to an efficient government. Public workers still won’t do anything without the approval of high officials. There are far too many of them meaning lots of them have little to do. Patronage and nepotism is the norm. Someone travelling in time from the 1880s or the 1940s to today would find the bureaucracy very familiar. These are all reasons why Baghdad can’t deliver basic services like electricity because it hasn’t changed much in over a hundred years, it’s just gotten bigger.

The Industrialization of Iraq is a very detailed survey of the Iraqi economy. It goes over all the major businesses from the 1800s to the 1950s, trade, the government plans or lack thereof, and the education and class system. There are tons of charts and other information. Most importantly it explains why Iraq didn’t develop during that period. The country had potential but just as many barriers to development. When the government got involved it ended up supporting the rich which should have been no surprise since they influenced the state and made up a large number of parliamentarians. The book doesn’t mention it but that was a major reason why the monarchy was overthrown in the 1958 coup. Langley therefore provides an important piece of political economy.