Review Iraq Under General Nuri, My Recollections of Nuri al-Said, 1954-1958 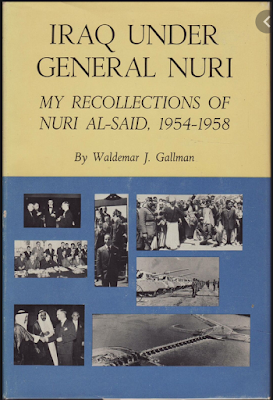 Iraq Under General Nuri, My Recollections of Nuri al-said, 1954-1958 was written by Waldemar Gallman who was the United States Ambassador to Iraq. The book covers the last years of Nuri al-Said who was the prime minister of Iraq thirteen times and a brief overview of the 1958 coup that overthrew his government and led to his death. Gallman has nothing but praise for Said. It’s interesting because this came at the height of the Cold War when America said it was fighting for freedom against the spread of Communism. Said didn’t really believe in democracy however and used authoritarian methods to rule and yet the ambassador thought that was fine because he considered Said a strong leader and a friend of Washington’s.

The first third of the book is the least appealing. It covers the formation of the Baghdad Pact which included Iraq, Iran, Pakistan, Turkey and England. It was promoted by the United States as a deterrent to the Soviet Union and yet Washington didn’t join afterward. The pact began with a security agreement between Iraq and Turkey which caused a huge amount of controversy with Baghdad’s Arab neighbors. The chapter goes through all the meetings Premier Nuri al-Said had with other nations to get them to understand the deal and then all of the subsequent conferences that led to the Baghdad Pact. This section goes on far too long and is not that engaging.

The following chapters are much better such as on how Said came to office and how he ruled. In June 1954 elections were held for parliament and the opposition parties formed a National Front which demanded that the vote be free. They got that promise leading to lots of campaigning and the Front gaining a number of seats in the new legislature. That meant the new government never really worked however and Said was asked to return to office. He would only agree if he could dissolve parliament, get rid of political parties, end press licenses and hold a new vote. The monarchy agreed. The result was that 116 candidates ran unopposed and there were only ballots cast for 25 candidates competing for 19 seats. Almost everyone elected was a supporter of Said. That didn’t really matter either because as Gallman noted Said didn’t consult with lawmakers on many things. In 1955 the Suez crisis broke out and there were demonstrations against imperialism across Iraq. The PM declared martial law and called out the police and army to put down the protests. This was how Said had ruled Iraq the previous dozen times. Gallman didn’t have any problem with this. The Communist Party was the main opposition group so the Ambassador thought this was all part of the Cold War struggle. Even when he mentions that liberal parties got banned as well, he didn’t say much. This has been U.S. foreign policy for years. It may talk about democracy but in practice as long as a leader says they are friends of America it will give them a pass. Hence Gallman wrote that Said might have used repression but he wasn’t a dictator so that was okay.

Another issue Gallman brought up was PM Said’s views on development and economic reform. Most of the country’s oil revenues were put into a development board which was supposed to carry out a national plan for Iraq. Most of this money went into flood control which was a huge issue when Said came into office and land reclamation. Gallman congratulated Said for these actions. However if he looked more closely he would have seen that the land projects went to expanding the holdings of the landlords that controlled the economy and were leaders in the government. The author also wrote that the Development Board only funded long term projects that did not provide any immediate relief for the public. Still he thought it was a good thing. Gallman noted that land reform was needed in Iraq but Said was against it. He believed that through inheritance these huge estates would eventually be broken up. That ignored the fact that in half the country when the father died only the oldest son got the land so nothing would change. The ambassador seemed to believe that at least Said was addressing reforms in his last years in office even though he didn’t actually carry any out. Just like his undemocratic practices Gallman was going to be positive no matter what.

There are several chapters on Iraq and its neighbors which were nothing but fractious. PM Said believed that Egypt and Saudi Arabia were constantly plotting against Iraq and trying to put in friendly governments in Lebanon, Syria and Jordan. In turn, Said constantly told the ambassador that Baghdad was ready to military intervene in those three countries. The prime minister always said this was to stop pro-Communist governments from coming into office, but it was really because of regional rivalries. Egypt’s Nasser had nothing but bad things to say about Said. Radio Cairo would constantly criticize the premier and the station was widely listened to within Iraq. Said was a pan-Arabist as well who believed in a greater Syria that would involve Iraq, Jordan, Syria, and Lebanon all forming a single nation. His disputes with those countries and more showed that would never happen. When Egypt and Syria joined together Said quickly reacted by having Iraq and Jordan creating a union. Even then Said thought it was a losing deal because he didn’t believe Jordan was viable economically. These are all examples of how Arab nationalism was one of the most important ideologies in the region at the time but could not become a reality.

The last part of Iraq Under General Nuri deals with the 1958 coup. The military launched a surprise uprising which led to the deaths of the monarchy and Said. Gallman predictably had nothing good to say about General Abd al-Karim Qasim who came into power. The ambassador said most of the top bureaucracy was fired, the economy came to a halt, investment stopped, and the military harassed Americans. Gallman thought Qasim was insecure and was always surrounded by guards and carried a gun with him at all times. Obviously Gallman was enamored with Said so the man who killed him was not going to curry favor.

In the end Iraq Under General Nuri is an interesting read. It gives a glimpse into how Said ruled as an autocrat. He didn’t believe in free elections, parties or a press that would criticize him. He was a conservative who didn’t want to change the political or economic systems. Gallman had no problem with that because Said was pro-American who talked about the threat of Communism. The ambassador also showed how the divisions within the Middle East undermined Arab nationalism. If the author hadn’t spent so much time on the Baghdad Pact the book would have been even better.