Review The Reckoning, Iraq and the Legacy of Saddam Hussein 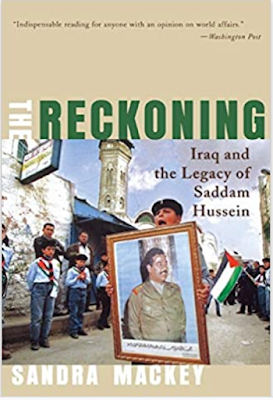 The Reckoning, Iraq and the Legacy of Saddam Hussein by Sandra Mackey is a history of the country from ancient times to right before the U.S. invasion. Mackey’s thesis is that Iraq has always sought a national identity but failed to create one. That has left it constantly divided along ethnic (Arab and Kurd) and sectarian (Sunni and Shiite) lines. The problem with her thesis was that she took the ethnosectarianism of the 1990s and 2000s and projected that back into the past.

The author’s theme is very common amongst many Western writers on Iraq. Mackey starts in ancient times with the series of empires that rose and fell in Mesopotamia and then the arrival of Islam. She posits that neither provided a unified identity for the country because many didn’t feel a connection to those old times while not all Iraqis are Muslims and those that are, are divided between Sunnis and Shiites. In the modern era Iraq’s loyalties were initially split between not only pan-Arabism and Iraqi nationalism, but between tribes and clans. Arab nationalism had problems for instance with Kurds who are not Arabs and have not felt part of Iraq either. She then uses that framework to analyze all the different periods of Iraqi history from the creation of the country by the British after World War I up to the rule of Saddam Hussein. There have been many other books that have argued this same idea. The problem is that ethnosectarianism has not always been the paramount issue in Iraq. Ideologies like communism and foreign control by the British were just as important during different times in the country. What Mackey did was try to force those issues into her framework in a very unconvincing way.

There are plenty of examples of this problematic technique. For instance the Iraqi Communist Party emerged as the largest popular organization in Iraq in the 1940s drawing in Shiites, Sunnis and Kurds. It led two major waves of protests against British influence in the country under the monarchy. To Mackey the Communists were not really about class struggle, overthrowing the capitalists or opposing the English, but a way for the Shiites to oppose the Sunni dominance of the government. Then when she deals with the emergence of the Arab nationalist Baath Party she notes that many of its early members and leaders were Shiites. She explains this as a move against the landlords and urban merchants who oppressed the Shiites. That’s because she earlier wrote that pan-Arabism never really drew Shiites so this was her justification for why they became part of the Baath. These claims just strains all credibility. The Communists were the only party that ever appealed to all of Iraq’s major communities in large numbers, but the author turns it into a sectarian struggle. She also never explains why Kurds were members as she believed they never felt part of Iraq in anyway, yet here they were joining with Arabs in a group that wanted to transform the country. Her idea that the Baath were about Shiites fighting the rich is just laughable. She doesn’t mention that many of the major landlords and members of the business class were Shiites, so this would be an internal class struggle within a sectarian group rather than being Sunnis vs Shiites which is her argument. These parts completely undermine the entire book.

The Reckoning, Iraq and the Legacy of Saddam Hussein is an example of a writer seeing the schisms within Iraq in the 1990s and 2000s and believing those were the norms throughout the country’s entire history. That led Sandra Mackey to make ridiculous points in her analysis of the past. The book does have lots of historical facts and the author believed that the divisions in the country would mean the U.S. would never be able to peacefully occupy the country after it overthrew Saddam Hussein. She even predicted an Islamic insurgency would emerge before the American invasion happened. None of that matters however because her thesis is so badly applied to historical events it’s really not worth reading the book.