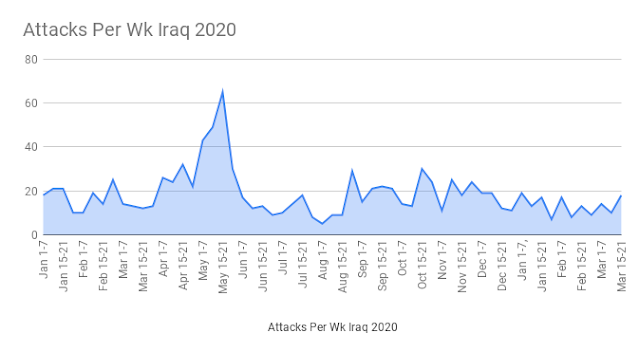 There was a slight jump in attacks in Iraq the third week of March. The total number of incidents by the Islamic State was still in the teens which has been the norm since November 2020 however. Whether this bump was the insurgents returning to the field or just a temporary event cannot be discerned right now. On the other hand pro-Iran groups have kept up a steady stream of attacks upon U.S. targets.

There were a total of 24 incidents in Iraq from March 15-21. 6 of those were by groups aligned with Iran and 18 by the Islamic State. 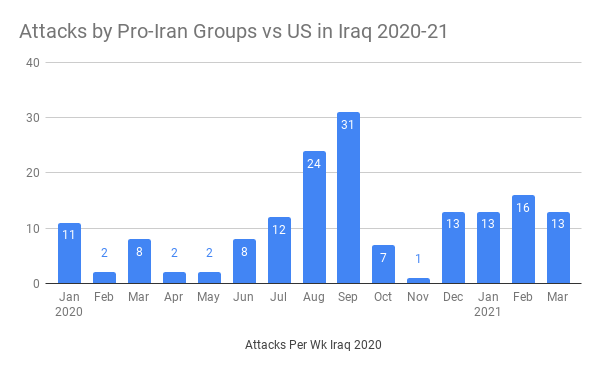 Pro-Iran groups carried out one rocket attack upon the Balad Air Base in Salahaddin and five IEDs on convoys carrying supplies for the United States. The latter occurred across Babil, Diwaniya, Muthanna and Salahaddin. These operations took off in December as the anniversary of the deaths of Iranian Revolutionary Guard Quds Force Commander General Qasim Suleimani and Hashd leader Abu Muhandis was nearing. Since then they have increased in intensity with regular rocket attacks upon Iraqi bases that house Americans. The IED in Salahaddin also showed that these factions are expanding into new provinces because most bombings are in the south and Baghdad.

There were three shooting incidents in Baghdad. One was an infiltration attempt in the south and the other two occurred in Tarmiya in the north where there was a gun battle and a soldier was wounded by a sniper. This is where IS regularly carries out its operations in the outer regions of the province.

The 8 incidents in Diyala were the most in the province since the start of the year. Besides the usual shootings and IEDs, two electricity towers were blown up in the north and four men were kidnapped. Six of the attacks were in Muqdadiya in the center, and two were in the northeast. IS started its rebuilding in Iraq in the Khanaqin district in the northeast and then expanded into Muqdadiya where it has established itself in rural areas. Attacks in the northeast are far more sporadic.

A checkpoint was attacked in south Kirkuk that left two police and a Hashd fighter dead and one more wounded. The other incident was an IED also in the south. IS has a strong presence in the southern part of the governorate but attacks have dramatically fallen off during the winter.

There was another infiltration attempt in Ninewa, this time in the southeast. There are hardly any incidents in this province anymore. It was quiet before because it was mostly used as a transit point for Syria, but like Kirkuk IS has been almost silent since November.

There were two shootings and an IED on a police convoy in Salahaddin. Three farmers were also abducted in the Tuz Kharmato district in the east. Like the kidnappings in Diyala these are usually done to extort money out of people by the insurgents.

Azzaman, "Losses to the crowd and Federal Police in an ISIS attack near Kirkuk," 3/18/21

NINA, "An Explosive Device Explodes On A Convoy Of The Int'l Coalition In Diwaniyah," 3/18/21

- "News of the targeting of a logistical support convoy of the American forces in Salah al-Din," 3/20/21

- "A policeman assassinated and the wounding of a civilian, when an explosive device exploded in one of Diyala suburbs," 3/19/21

- "Security Forces Thwart An Infiltration Of ISIS In Southeast Mosul," 3/15/21

- "A second explosion of its kind targets the international coalition," 3/18/21