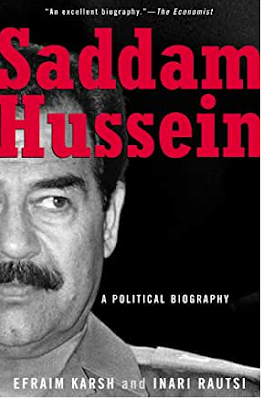 Saddam Hussein, A Political Biography is an up and down book about Saddam Hussein up to the 1990s. It goes from his upbringing to his rise within the Baath Party and then his leadership of Iraq which led to two disastrous wars. Those two conflicts are where authors Efraim Karsh and Inari Rautsi run into some problems especially in their portrayal of the Iran-Iraq War. Their main argument is that Saddam Hussein was a calculating survivor who used pan-Arabism in an attempt to assert his will over the Middle East.

Saddam’s time in the Baath Party shaped his political future. He joined the party in 1957. The next year he was accused of killing a government official, the year after that he took part in an assassination attempt against Iraq’s leader General Abd al-Karim Qasim. In 1963 the Baath overthrew Qasim and seized power along with the military which then promptly kicked the party out of government. That led Saddam to begin plotting against the new President Abdul Arif which landed him in prison for two years. Finally, in 1966 he purged a faction within the Baath. These experiences had a huge impact upon Saddam’s world view. First,  he learned that plots and violence were the way to power in the country. Starting in 1936 Iraq had a series of coups. Saddam was part of this world of parties vying for power which included killing opponents. Second, the military was not to be trusted. That was the lesson of 1963 when the army expelled the Baath from government. Last, Saddam had to make sure he was the center of the party and that meant getting rid of any faction or individuals that could challenge him. Purges, exiling people and executions became the norm when he finally became the head of the country. This is what the authors meant by Saddam being calculating. He spent years climbing the ranks of the Baath Party, building his reputation and eliminating rivals. He played the long game and it would eventually payoff.

Karsh and Rautsi believed that Arab nationalism was one of the main causes of problems in the Middle East. They argued that Saddam cynically used it to assert his leadership over the region. He championed the Palestinians for instance but when the Jordanian government moved against the PLO in 1970 he was against Iraq helping them. Later he brought up the Palestinians to try to win over the Arab street in 1990 by saying he would withdraw from Kuwait if Israel did the same in Palestine. In the epilogue the authors wrote that pan-Arabism was a front for Arab leaders who dreamt they could rule over the Middle East and they saw Saddam’s use of the Palestinians as an example of that. The Palestinians were simply a pawn to be brought up when politically advantageous.

The problems with the book arise in the second half. The depiction of the Iran-Iraq War has major issues. First the authors write that Saddam was reluctant to go to war and was a choice of last resort feeling threatened by the Iranian Revolution. They claim his limited war aims were a sign of that. Then they say Iraq had early military successes during the invasion but didn’t press forward when it could have defeated Iran. Finally, they believed that the February 1988 war of the cities where Iraq bombed and fired missiles at Iranian urban areas led Tehran to negotiate an end to the hostilities. None of this is true. A captured Baath recording for instance that covered the decision to go to war with Iran showed no fear but rather an opportunity. Saddam said the new government in Tehran was weak after the revolution and that offered the opportunity to attack. Even beforehand other authors noted that Saddam was all to wiling to invade hoping to seize Iranian territory and cause the demise of Khomeini. Next, Iraq immediately ran into military problems and failed to seize any of its initial objectives. There were few successes and there was no way that Iraq could have defeated the Iranian military and Baghdad had no plans to do so anyway. Last, the turning point in the war was a series of Iraqi offensives that not only expelled Iranian forces from Iraqi territory but seized some Iranian land as well, the first time in years. That along with the arrival of the United States into the Persian Gulf to protect shipping finally convinced Ayatollah Khomeini to end the war, not Iraq hitting Iran’s cities. There is also one issue with the Gulf War as well when the book claims Iraq’s offer to withdraw from Kuwait if Israel withdrew from Palestine was seriously considered by countries such as France and the USSR. It fails to mention that they were two longtime allies of Iraq trying to get it out of its bind. More importantly the international community never believed Saddam was serious on that issue. The Iran-Iraq War gaffes are much more glaring because it doesn’t seem the authors understood some of the major events.

There are many positives to Saddam Hussein, A Political Biography, but the negatives are annoying. It shows how Saddam went through the dangerous world of plots and coups in the 1950s-60s, and then how he out maneuvered everyone else in the Baath Party to become the leader of the country and hold onto power for decades. That included surviving two wars with Iraq emerging bankrupt after one and defeated after the other. That was a result of Saddam wishing to be the leader of the Middle East. On the other hand, they got the main points of the Iran-Iraq War completely wrong. That is a big fault. While a reader can definitely learn about Saddam’s political vision from the book, there are others that do the same and know about the Iran-Iraq War.